What's happening in the lead-up to race day at the second round.

There’s always much anticipation in the lead-up to national events and for 2018, we’ve introduced a fresh new Express feature to keep you up to date on the latest prior to every single round. This weekend, round two of the Pirelli MX Nationals at Appin, New South Wales. 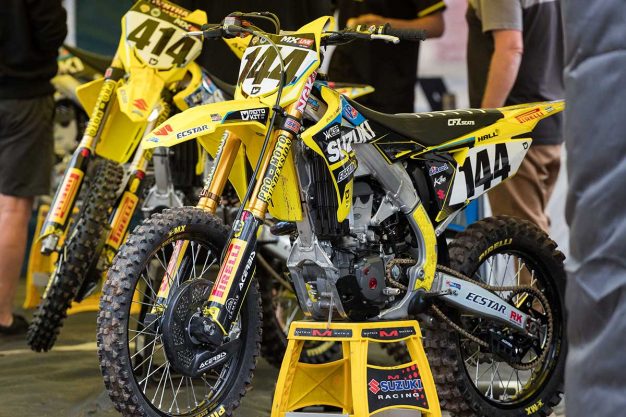 – It was announced just prior to this weekend that KSF Ecstar Suzuki has brought in former Yamalube Yamaha Racing regular Jordan Hill to replace Isaac Fergusson on its RM-Z250 for the remainder of the season, which marks Hill’s return to professional competition following a lengthy layoff.

– On the subject of Suzuki, Keiron Hall is back on the bike and that will mark the debut of the new-look factory-supported MX1 program. Good news is, with Jesse Dobson expected to be back for Wonthaggi, we will see two RM-Z450s behind the gates.

– Kawasaki Motors Australia hosted a Meet the Team event at its Rydalmere HQ in the lead-up to this round, where Complete Parts Kawasaki Racing unveiled the red plate on MX2 points leader Aaron Tanti’s KX250F. A surprise winner of sorts at the opener, he is carrying serious momentum into his home round.

– While a number of riders starred at Newry’s opener, there will be a whole heap who will be eager to turn their fortunes around in the early stages. A couple in particular will be Brett Metcalfe, who suffered a DNF when his Penrite Honda encountered issues in moto two, plus Dylan Wills, whose first appearance with DPH Motorsport Husqvarna was underwhelming come the races.

– Macarthur Motorcycle Club members had the rare opportunity to ride with an assortment of pros on the usual practice track over the hill on Saturday, including CDR Yamaha Monster Energy Team’s defending champion Dean Ferris. Like every year, it’s not uncommon to see riders on-track prior to race-day, albeit on the traditional circuit.

– If you are heading trackside at Appin on Sunday, make sure you stop by the Yamaha Motor Australia tent and take a look at the GYTR-equipped YZ65. No doubt it will attract much attention throughout the weekend.