Exploring the Queensland coastal town aboard a Gas Gas EC 300.

After working a couple of seven-day weeks in the city of Melbourne, I needed to get away for a couple of days back home in Queensland with some buddies. Somewhere that would be a bit different and a bit more memorable from the usual, which is usually going camping in the bush and riding for a couple of days.

There are not that many places where you can legally ride on the beach and have some unreal trails nearby as well. Fraser Island was the first thought, but that’s off limits in a van, so that was off the list. After a bit of research and a few phone calls to mates who had ridden in the area before, Rainbow Beach was the chosen destination. Plenty of beaches to ride, abundant camping, kilometres of trails and a couple of pubs close by as well.

Rainbow Beach is a small coastal town in between Fraser Island and the Great Sandy National Park, just a short drive north-east of Gympie in South East Queensland. It will take you about three and a half hours to drive from the Gold Coast, so it’s not too far away, but far enough to feel free from civilisation. It has two pubs, a couple of cafes and other places to eat, with a small supermarket as well. Sometimes it’s easier to not make too many specific plans in life, because at times you end up having the most fun when you throw a little caution to the wind and just wing it a little. We had the main objectives covered, being beach, water, trails and a pub. Instead of booking a camping spot online before we could actually see the lay of the land, so to speak, we thought we would make plans as we went. Besides, we had a van we could pretty much set up anywhere if we had to.

We headed north of the town towards the ferry to Fraser Island and found a couple of ideal camping spots where we could camp right on the sand and literally throw a stone to the ocean, cool off after a ride and fish. There are plenty of places, but you have to book a camping spot online. We ended up driving up from Rainbow Beach towards Inskip Point and found the perfect place.

Towards the end of February the area wasn’t too crowded and, given that it was a weekday there was plenty on offer. Once we settled on a place that looked ideal, we jumped online and booked our site. While you are doing that you may as well get your permit to ride on the beaches at the same time. After finding a place to camp for the night, we unpacked and threw our legs over the bikes to get out on the beach and find some trails – straight down Freshwater Rd to the Freshwater Camping Area and onto the beach. And then onto Double Island Point lighthouse to check out the view. 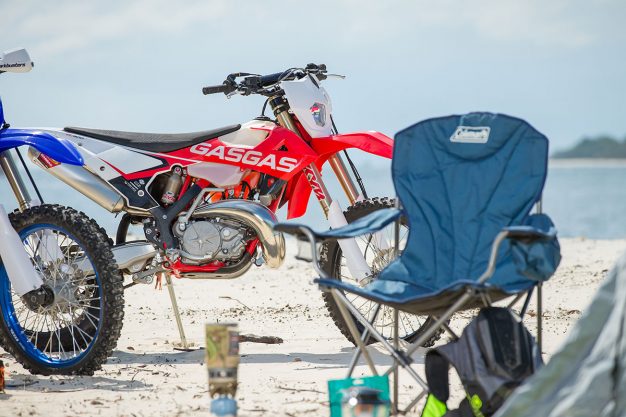 The beach is about 40 kilometres, south to Noosa Heads with the Great Sandy National Park running right down the beach to Noosa with a plethora of trails off into the scrub – you need to get onto the existing fire trails and explore from there. Riding on the beach is fun, because it’s not every day you get to ride on deserted beach, you would think that being on a massive island, it might be easy to find a place to ride on the beaches somewhere in Australia, but it seems to be getting increasingly difficult.

Once we had our fix of the beach, we jumped back onto Freshwater Rd and had some fun on the fire-trails back towards the highway and then back to the campsite to have a quick swim and throw a line in to try catch a feed the old fashioned way. It turned out we weren’t the best fisherman, so we packed it in and rode into town for a counter-meal and a beer at the Rainbow Beach Bowling Club. After checking out the nightlife of the area and having another beer, we headed back to the swags for some shut-eye.

Our day started off fairly similar on day two, riding along the beach, dodging waves along the way as it was still fairly high-tide, making our way from town along the northern peninsular towards the Double Island Point lighthouse and crossing to the southern side using Leisha Track. We grabbed a couple of photos before heading back into town to ditch the added weight of the cameras and then ventured off to find some more technical terrain, deeper in the Great Sandy National Park and closer to Cooloola. 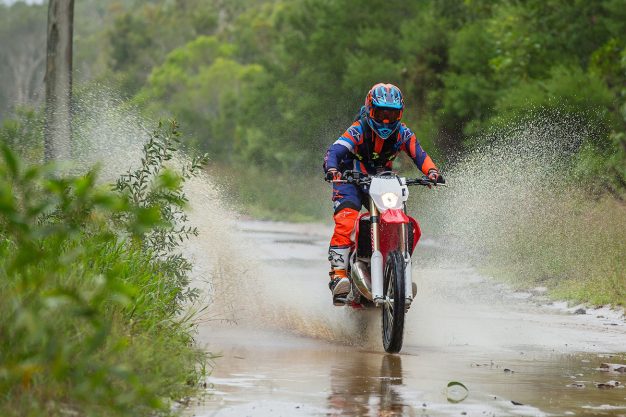 We had heard of a few single-trails in the area and we seemed to find a couple of trail-heads that looked promising. We eventually settled for one that ended up being a bit more hard work than what we had bargained for. Recent storms had brought down a significant amount of larger trees on this trail, which turned a fun, flowing single-trail into a bit of a choose your own adventure mission.

The fairly straightforward trail had been turned into a mission, that is for sure. Other trail users had started to cut in a B-line around the downed trees and other obstacles so the trail might be back in action sooner rather than later, but it will probably be twice as long as it was previously. We certainly found the more difficult trails that we were after, be it for reasons we had not initially had imagined. It’s definitely a good idea to pack some extra trail treats and plenty of water if you intend on going searching for trails in the area.

Having taken a significantly longer than anticipated, we didn’t have much day light left for riding to continue exploring the area we finished up a little early and headed down to the car wash to get all the salt water off the bikes. Either way, it was a good time and the Gas Gas EC 300 on loan from local distributors Urban Moto Imports proved the perfect companion for a good couple of days on the bike.