One round into the 2018 season, here's what we're keeping tabs on.

With one round of the 2018 Pirelli MX Nationals complete, we’ve had plenty of questions answered, but a whole lot more have arisen. Among each championship, mini dramas and stories cropped up at the championship’s opening hit-out at Newry and, with one of the riders’ and spectators’ favourite tracks at Appin carded for this weekend, there’s plenty to be keeping an eye on. 1. Ferris vs Gibbs:
Although KTM Motocross Racing Team’s Kirk Gibbs entered the season with the wind in his sails after a really strong build-up and off-season, CDR Yamaha Monster Energy Team’s two-time defending champion Dean Ferris snuffed out that confidence with a rapid-fire 1-1 race result at Newry. The pair traded metaphorical blows in the opening race, setting the scene for what promises to be a fascinating battle in 2018. Gibbsy’s been vocal that he’s had a gutful of being Ferris’ bridesmaid the past two years and he’ll be very eager to turn things around at Appin, a track he’s traditionally done pretty well at in the past. Ferris, though, might have something to say about that.

2. Crunch-time for Metty:
While most of the pre-season chatter surrounded Ferris and Gibbs, there were plenty of murmurings that Penrite Honda Racing stalwart Brett Metcalfe was in some pretty handy form. At Newry he proved he was more than comfortable running near the front of the pack, with a creditable fourth in the opening race. The second moto didn’t go to plan however. While holding down third, his chain mysteriously derailed and cracked the engine cases, forcing him to DNF. With such a huge loss of points at the very start of the season, Metty needs to smash out race wins if he wants to push for title contention, especially with Gibbs and Ferris already out front and setting the standard.

3. The Evans brothers:
While North Queenslander Mitch Evans (Raceline Pirelli KTM) has spent a couple of years on factory-backed equipment now, older brother Richie is under the Yamalube Yamaha Racing team for the first time this season and impressed many with his 4-6 result on debut with the team at Newry. Meanwhile, Mitch turned all sorts of heads last weekend when he stunned the MX1 class with a third overall in his first-ever MX1 hit-out. Can both Evans back-up their great starts to the season this weekend?

4. Homeground advantage:
The hard-pack Appin circuit is notorious for its ruts, off-camber corers and square-edged bumps, so a home advantage here is worth at least a couple of seconds per race. KTM Motocross Racing Team’s new MX1 recruit Luke Clout and DPH Motorsport Husqvarna’s MX2 title-contender Dylan Wills know Appin better than most, having grown up close by and spending untold hours hauling around the Macarthur Motorcycle Club hills. Clouty had a mixed 9-4 bag at Newry with a fall at the start of the first race costing him chances of a top five overall. Meanwhile, Wills will want to erase Newry from his memory after mid-pack starts, falls and a 10th overall result.

5. Time to step up:
Behind the likes of Ferris and Gibbs, a plethora of MX1 contenders really need to step up and make their mark on the championship if they want to be viewed as serious title threats and not just top-fivers. Dylan Long (CDR Yamaha Monster Energy Team), Kade Mosig (DPH Motorsport Husqvarna), the returning Caleb Ward (Davey Motorsports Husqvarna) and Kiwi Rhys Carter (Complete Parts Kawasaki Racing) all need to find an extra gear to separate themselves from the pack. Mosig and Carter both showed some promising flashes at Newry, but they need to turn those flashes into something more sustained and brilliant. 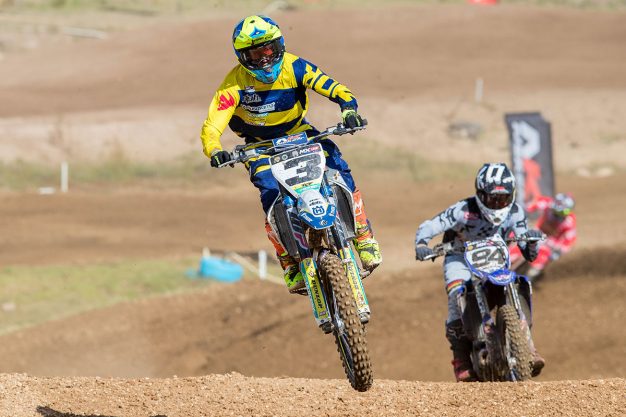 6. Tanti excels:
Complete Parts Kawasaki Racing pilot Aaron Tanti raised a tonne of eyebrows at Newry by hole-shotting both MX2 motos, leading the second encounter wire-to-wire and taking his first-ever round overall. All eyes will be on the New South Welshman to see if he can double down on his results – especially as Appin is his home round – and prove that the red plate doesn’t add unnecessary pressure to his shoulders. For Tanti, it’s almost imperative that he has another impressive showing and again sets the bar for the rest of the championship. Between Tanti and Carter, the new Kawasaki outfit has already proven they’re not one to be dismissed without some peril.

7. Battle of MX2:
If Newry was anything to go by, there’s a fascinating mini-battle brewing between two of the biggest guys in the MX2 class, Nathan Crawford (Serco Yamaha) and Hamish Harwood (Davey Motorsports KTM). The pair played cat and mouse for several laps at the opening round before Crawford ran away for the win, but they found each other on the track again in the second race as they finished fourth (Crawford) and fifth (Harwood). Both are super-fit, strong, and seem to come into their own when the track gets brutal. And Appin is anything but a playground for pansies at the end of a big day of racing.

8. Unfinished business:
Last year’s MX2 scrap between championship contenders Wilson Todd and Egan Mastin was an absolute barn-burner and, to be honest, we were kinda expecting these two arch-rivals to commence 2018 where they left off. In that respect, Newry was a bit of a fizzer. Thanks to a solid third place finish in the second moto Todd got the upper hand on the day, but both guys struggled with the concrete start and could be blamed for over-riding the technical track. You can guarantee these two will find each other on the track again this year and neither will want to back down.

9. Comeback of Kyle:
Just six months ago Perth’s Kyle Webster was laid up in hospital with a broken back. A massive crash at the Bacchus Marsh round of the Australian Supercross Championship left him with broken T7, T8, T9 and T10 vertebrae and he temporarily lost feeling from his waist down as his spine went into shock. Returning to top-level racing in such a short time is no mean feat, but the Penrite CRF Honda Racing team member blew everyone’s expectations at Newry with a runner-up result to Tanti in the second moto on his way to fourth overall. It’s a hell of a story and we’ll be watching with interest to see how he fares on Sunday, especially since he’s now based in the region.

10. Three-way split:
How often have you been to a race where all three podium-placers tied on points and had to be separated by count-back, but none of them won a race? For the life of us, we can’t recall that happening in a long, long time (if ever!), but that’s exactly how the MXD class played out at Newry, as Hugh Mackay (4-2), Riley Dukes (3-3) and Callum Norton (2-4) filled the box, while race winners Morgan Fogarty and Bailey Malkiewicz finished fourth and fifth respectively. So what does this all mean? Basically we’re waiting for someone to step up and own the development class, but at the same time, if we see the same fascinating racing happen week-in and week-out in MXD this year, we’re certainly not going to complain!