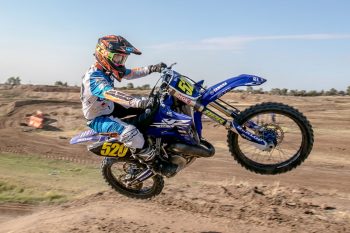 GYTR Yamaha Junior Racing (YJR) riders ripped it up again on the weekend as three of the hard chargers took on the opening round of the Victorian Junior Motocross Championship, held at the Warrnambool circuit while another took duel class wins in Tasmania making it another hugely successful weekend for the junior bLU cRU.

The local Victorian crew of Liam Andrews and Ty Sharp where at the Warrnambool event but were joined by South Australian Alex Larwood who made the trek across the border.

It was the first major hit out for the boys down south and they showed that despite being the first big race of the year, they were prepared and ready to go bringing in several class wins and podiums.

Liam Andrews led the way, winning both the A Grade 125 and A Grade 250cc in an impressive return to racing. Andrews has been sidelined with injury for some time after a fall while riding in the US late last year and only recently just got back on the bike.

While he didn’t dominant in both classes, he won races when required and was consistent as ever always finishing inside the top three in all six motos.

“It was good to get the year off to a winning start and a nice way to return back to racing. I’m still not 100% but I’m starting to feel better on the bike and hopefully things will improve from here as we have a big season in front is us,” Andrews said.

Not to be outdone by his older team mate, Ty Sharp went on a winning spree of his own taking victory in his 65 and 85cc classes. It was just the start Sharp was chasing and sets him up for a great season ahead.

“I missed the junior nationals last year because of injury but when I was able to ride again, I was back into it and getting ready for this season. Its pretty cool to see that work turn into a good result and I can’t thank my family enough as well as the Yamaha Junior Racing team and our sponsors.”

And the ironman award must go to Alex Larwood. The current Australian 85cc champion didn’t want to sit and watch the racing, he wanted to be in it and entered three classes on the weekend. He raced his YZ85, YZ125 and YZ250F over the weekend and managed to land on the podium in all three classes.

Larwood claimed second on his 85cc, third on his 125 and another third on his 250F in an energy sapping weekend.

“It was tough racing all three classes over the weekend and it did wear me out but I needed and wanted the track time,” said an exhausted Larwood. “We have our South Australian Championships coming up soon and racing here was great preparation for that. I need to get a little stringer to ride the 250 probably but I have only been on it a month and I love it,” he said.

The winning streak kept rolling in Tasmania with Angus Pearce winning all before him at round two of the Tasmanian Junior Motocross Championships. Pearce won both the 65 and85cc classes he contested and is good shape as the championship moves towards round three.

And Ryder Kingsford flew the YJR flag at the East Coast MX round at Port Macquarie. In a rare off day, Kingsford still managed to land on the podium in third on his 85 but acknowledges it wasn’t his best day and he made too many mistakes.