KTM Enduro Racing Team’s Daniel Milner recorded an astonishing fifth Australian Four-Day Enduro (A4DE) Outright victory last week in New South Wales, taking the top top spot in the E3 division in the process. MotoOnline.com.au tracked down the Victorian to chat about his stellar week for this latest edition of Catching Up. 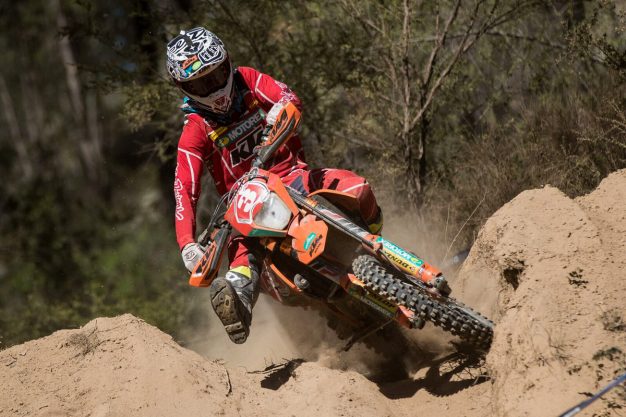 Firstly, congratulations on earning your fifth A4DE title last week, you must be really pleased to have brought it home.

Yeah, for sure. It’s been a while since my last one, which was back in 2015 – we’ve had one A4DE since then at Mansfield, I was running up the top for majority of the race, but struggled a bit and ended up dropping back to third. The previous one really fired me up for this one, I knew what my job was and that was to go out, win and do the best that I can. We went out and did that.

It was the 40th edition of the A4DE in Cessnock, and obviously this is your fifth title – where does it sit amongst the others?

I think this is one of the most special ones I’ve had, that’s for sure. Being the 40th anniversary, and some of the legends that were at the race – spectating and racing – it made me feel special to go out in front of those guys and win in front of them. The Tuesday before the event we had an ISDE night, where everyone who was involved in the six days was there, and it kind of put shivers down my spine knowing the people that were there and who make the sport what it is. Back in the day, those guys were talking about how they had to fund themselves for the six days, to now where we’re spoilt for what we have – we’re able to go out racing and do it as a job, where as they were putting all their hard work and money into going overseas to race. For me to go out and win in front of those guys, it definitely made it special.

The conditions were quite dusty and challenging, and Daniel Sanders was really the only guy to challenge you. What was key in remaining in control for the duration of the four days?

It was definitely difficult, and to be honest, it was probably the most difficult A4DE I’ve done – mentally and physically. There wasn’t a day there where we stuck to our time card, the timing with the trail they did never seemed to work out right – it was a big struggle, because every time you went to time control, you were five minutes late. So every time you had to add five minutes to the time control you were going to next – I know for a fact I was never too smart at school, but we had to work out our maths going into the next time control. It was definitely draining. Then there was how difficult the track was – there were tests where we rode some of the gnarliest things I’ve done in a long time – you know, knee deep powder ruts, and the actual tests were technical in themselves. The tracks were awesome and there wasn’t even one bad test for the whole four days. It would’ve been awesome to see different conditions with a bit more moisture – I think that would’ve been the funnest four-day ever. Unfortunately, you don’t get to choose the weather, but all in all, it was a real gnarly and hard A4DE. It was your first A4DE with the KTM Enduro Racing Team, how was the team dynamic during the event?

It was good – the start of this year was a struggle for us, we changed from 52mm forks to the 48mm forks, and the first around of the AORC was a massive struggle – I was surprised to finish where I did finish. We went home, the team supported me and we got some stuff on board for testing and made sure that the bike was 100 percent going into the A4DE. We went testing back home and got it spot on, it was even handling better than what we had with the 52mm. I guess that was the most warming part about the team and myself, knowing that we were all happy. Day one showed that straightaway – we got a decent lead on day one, and the boys and I were pretty stoked from then onwards. I just had to be consistent and smart about it.

Sanders fell short to you in the Outright standings, and there’s no doubt you guys will continue to go head-to-head in the remaining rounds of the AORC. Is it a healthy rivalry between the two of you?

Yeah for sure, we’ve always had a bit of a rivalry, I guess you could say. For me, all I care about is winning, especially when the team puts in as much effort as they do into me and my teammate Lyndon. For me it’s not just going out there and winning for myself, it’s winning for those guys too. I guess the whole Chucky thing, he’s just another competitor and guy I’ve got to go out and race every weekend. The stuff that gets said around the pits, all that does is motivate me and make go as hard as I can – I’m one rider out there with a lot of fire, and for people to say stuff – negative or positive – it always seems to fire me up and make me go win. Going to the first AORC and struggling like we did, and how the last A4DE went, it’s been something that is eating me out. To go out and win the A4DE like we did, it’s just made me hungrier to win all season – that’s my goal from now on, to go out and win. It is motorbike racing and anything can happen, but I’ll just put my head down, butt up and never give up.