Looking back at the talented Queenslander's stint in the world championship.

Earning a spot on the world stage with the backing of a factory outfit is where every motocross racer aspires to be – all the years of hard work, sacrifice and commitment are ultimately an effort to be contesting for the most prized championship amongst the world’s greatest riders.

Following a MX Nationals campaign in 2013 that saw him denied of an Australian title by 23 points, talented Queenslander Todd Waters was granted an opportunity in the MXGP World Championship with the then named Red Bull Ice One Husqvarna Factory Racing Team, which would see him make his debut in the prestigious series in the 2014 season.

It marked Husqvarna’s first season in the world championship under KTM’s ownership, where Waters, alongside teammate and former world champion Tyla Rattray, were enlisted to spearhead the manufacturer’s resurgence in motocross racing globally.

Speaking of the opportunity in 2013, the number 47 was evidently thrilled with the chance to race overseas: “I’ve been working so hard to get to Europe,” said Waters. “So for something this big – a factory ride – to happen is amazing. I’m looking forward to the experience, I’m going to take it with both hands and try run with it.” Waters’ debut season proved to be an incredibly tough experience, after recording just five grand prix races and sitting seventh in the standings, he suffered an unfortunate training incident ahead of the sixth round, resulting in multiple broken bones – including his leg, hip and collarbone – that would rule him out of the remainder of the season.

Commencing the season with an 11th overall finish at Qatar, his best finish at this point was seventh, which he managed to earn on two occasions at the grand prix of Thailand and Brazil.

With his injuries ultimately sidelining him from the world championship, he did return to racing later that season, albeit in the ADAC German Motocross Championship.

Despite his misfortunes in his debut campaign, Waters displayed enough promise and potential for the factory Husqvarna team to extend his contract for the 2015 MXGP World Championship, much to the delight of the popular Queenslander. 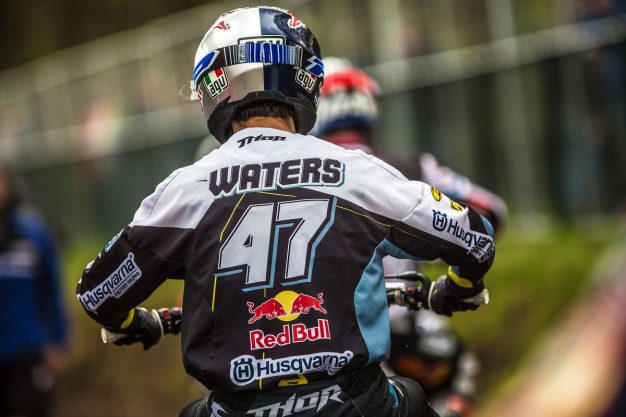 “It’s my opportunity to set things right from this season,” Waters commented after inking his new deal. “Although 2014 started out very positively, things just didn’t go to plan when I suffered some serious injuries to my leg, hip and collarbone.

“I feel like I’ve got a tight bond with the team, I feel settled in Europe and no longer have any nerves entering the races. My goals for 2015 are simple – I want to be at the front of the pack, running inside the top five and pushing for the podium.”

With his health back in order and the 2015 championship now in full swing, Waters clicked off a number of finishes that saw him situated just inside and outside of the top 10. It certainly wasn’t the start he was looking for, although at round nine of the championship, he would experience the height of his MXGP international career.

In a mud-infested grand prix at the Maggiora circuit in Italy, Waters powered through the increasingly challenging conditions, lodging a pair of fourth place finishes to be credited his first podium in grand prix racing, taking home the final step on the box. “This is a huge result for me and the team,” Waters reflected. “We worked really hard during the two weeks prior to this race, and I guess it paid off. I love racing in the mud, the conditions certainly didn’t faze me. To finish third overall is an amazing feeling.

“I felt good all the way through the first moto. I moved up from seventh or eighth to fourth, which was good, but I felt like I should have done better with the way I was racing. I wanted more from the second moto and was third when I dropped it.

“The team told me a podium result was on about three quarters of the way though the race, so I went for it. I gave it everything and to get third is amazing. I have to say thanks to the team and my mechanics – it’s awesome.” Waters went onto score a host of finishes inside the top 10, including fifth overall at the 12th round in Sweden. At the season’s end, he had earned 354 points, rewarding him with ninth in the championship standings. He also represented Team Australia at the FIM Motocross of Nations, assisting the nation to seventh in the standings.

It wasn’t enough to secure a seat in the world championship for the following season, prompting a return home to Australia with Wilson Coolair Motul Factory Suzuki in 2016, before transitioning to the Crankt Protein Honda Racing outfit in 2017.

This year sees Waters embark on a new international journey, recently completing the New Zealand MX Nationals in preparation for the AMA Pro Motocross Championship, where he’ll contest his first season of the American outdoor tour in a privately funded effort.