MXD champion on embarking on his rookie campaign in the MX2 category.

Transitioning from the junior categories of motocross to the national MXD division is one of the biggest steps in a promising rider’s career, although, the step up to the MX2 class may just be an even bigger change as they’re tested against country’s most experienced athletes.

For Victorian Cody Dyce, he’s just weeks away from making his debut in the MX2 division of the Pirelli MX Nationals, and with the 2017 MXD crown to his name, he’ll be under the watchful eye of many as he embarks on what is potentially a pivotal year of racing in his youthful career.

Upon reflection, Dyce says his 2017 campaign was a difficult one, despite walking away with an Australian title under his belt. Formerly a member of the Yamalube Yamaha outfit, the teenager experienced a steep learning curve in his rookie season, but in saying that, it’s shaped him for the challenge that lays ahead.

“It was definitely tough and there a lot of fast guys coming up into the MXD category out of juniors,” Dyce reflected. “I really had no expectations going into it – my old man and I just put the off the track work in over the pre-season, and coming into Wonthaggi, that seemed to pay off. 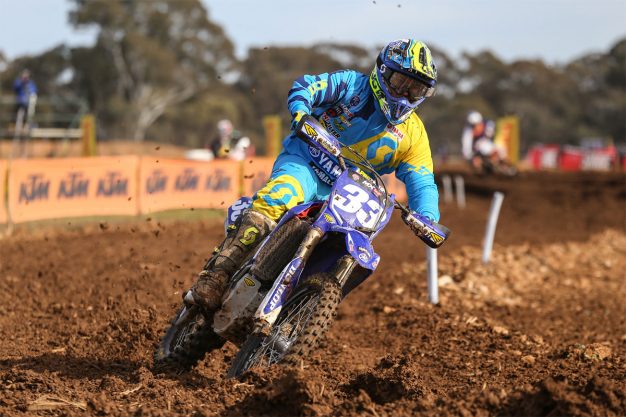 “I just tried to keep the ball rolling from there and be consistent. I had two pretty shocking rounds in the middle [of the season], and maybe if I didn’t do that, I would’ve had the points lead going into the last round. It was unfortunate for Jy [Roberts] to break his arm at the last round, but that’s racing I guess.

“It was hard, I came out of juniors where I only had a handful of races for the whole season. Doing eight rounds of the Australian titles with 20-minute motos and trying to get a good qualifying position, it was definitely a learning curve.”

With a change of class, comes a change in team for the number 33 – signed with the newly-formed Empire Motorsports squad, Cody will continue to pilot a Yamaha YZ250F in 2018, a machine that he is all too familiar with.

Headed up by Tyson Cherry, Dyce will have renowned mechanic Mike Landman, who has wrenched for CDR Yamaha and Honda’s factory efforts over the years, alongside him all season long, which will prove to be an important asset in the highly-competitive quarter-litre class. “I don’t really have any expectations, the new team that I’m on – Empire Motorsports – has a really good group of people behind – I’ve got Mike Landman as my mechanic and Tyson Cherry as the team manager.

“It’s not that we’re not taking it serious, but there’s no pressure to do well – we as riders already have expectations we want to meet, so I think it should be good going into this season.

“I just need to get my head around the 30-minute motos of racing – you can practice 30-minute motos all day and it can be sweet, but when it comes to racing them, you don’t really know how you’re going to go until the first round.”

As the season opening round looms at his home circuit in Newry, Victoria, on 15 April, Dyce is adamant on being a contender in the top five, playing on the fact he’ll have a significant home-track advantage. The Newry circuit is a new addition to the MX Nationals for 2018, and it’s one that many riders amongst the national contingent have had limited experience at. It’s an opportunity Dyce is hoping to take advantage of, growing up just minutes away from the venue.

“If I can get in the top five, I’ll be happy with that – if you can stay in the top five for 10 rounds, you have a half decent chance of being in the top three in the championship.

“I know Maffra really well, it’s not going to be easy, but it’s going to take the pressure off as some of the boys won’t know the track as well as I do.”

Dyce will be joined by Deakin Hellier under the Empire Motorsport banner, who will be contesting his rookie year in the MXD category of the MX Nationals.