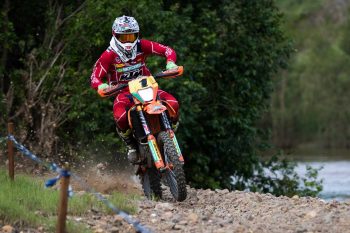 A mainstay on the domestic schedule and highly-regarded as one of the most important championship trophies to capture, the A4DE returns to Cessnock in New South Wales, where both Milner and Snodgrass will factor among the favourites.

Milner has won the four-day outright in 2012, 2013, 2014 and 2015, which is a remarkable feat for the 26-year-old current Australian Off-Road Champion and he will be aiming for win number five aboard the KTM 500 EXC-F within the E3 category.

It’s also shaping up to be a strong event for Snodgrass, the 20-year-old who finished third in the E3 class when the A4DE was last held in 2016. After winning the Australian Off-Road Championship (AORC) E3 title last year, he has increased confidence leading into the four-day aboard his KTM 450 EXC-F.

Day one of the A4DE will officially take place on Wednesday, 4 April, with the competition spanning all the way through to the title-deciding final moto on Saturday, 7 April, at Cessnock Race Course. Outright, class, manufacturer and state competitions will all be of importance to the nation’s finest off-road racers.

Join the KTM Enduro Racing Team at the special KTM Newcastle (140 Lambton Rd, Broadmeadow NSW) dealer party from 5:00pm on Thursday, 29 March. There will be a rider tech-talk on setting up for the A4DE and free sausage sizzle for all in attendance.

Glenn Kearney – Motorsport Manager, KTM Australia: “Being the 40th anniversary of the A4DE it’s definitely a big event on the calendar, especially with last year’s running not going ahead. Everybody is eager to get underway and we are looking forward to it at KTM Enduro Racing Team. There has been some rain up that way, so it should be perfect conditions for when we are on-track next week. Rider-wise, both Daniel and Lyndon are excited, we’re ready to roll and Milner obviously has the runs on the board in this format with four wins to his credit during his career. These events are a lot different to AORC events, you have to be extremely calculated in the way you go about the race and a lot of preparation goes in. You need to push, but be mindful that four days are a long time and you need to be there in the end to win it.”

Daniel Milner – KTM 500 EXC-F: “I’m really looking forward to the four-day, having won four of them in the past and that’s a pretty big achievement for myself. Hopefully I can keep adding onto that and we’ve been up here testing already, riding on similar terrain to the race and preparing as well as we can for next week. To win the A4DE, over the years I’ve tried to be as consistent as I can be because you can’t win it on the first day, but you can definitely lose it. It’s all about getting through each day, putting yourself in good positions where you can and going from there. It’s definitely a challenging race when you’re pushing so hard over four days, but it’s a rewarding race to achieve a strong result in. I’m really hungry coming into the 2018 A4DE so I’m excited to see where we end up by the end of it all.”

Lyndon Snodgrass – KTM 450 EXC-F: “It’s been a while since we’ve had an A4DE, so I’m definitely keen to get out there and the tracks that we’re going to ride during the event are said to be really good in Cessnock. It’s all exciting for us as riders, so I’ve been training hard for it and can’t wait for day one to arrive. It’s a long race, being four days anything can happen, so you need to be measured in your approach, push where you can and also make sure you stay on the bike for the week by minimising mistakes. I want to get through each day cleanly and then hopefully we’re in a good position come the final day.”