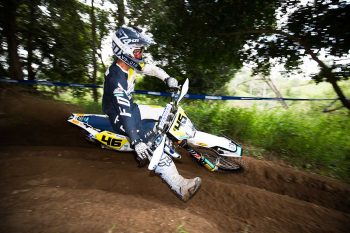 The Husqvarna Enduro Racing Team of Lachlan Stanford, Daniel Sanders and Fraser Higlett will embark on the 40th anniversary edition of the Australian Four-Day Enduro (A4DE) in Cessnock, New South Wales, next week between 3-7 April.

Recognised as one of the most prestigious standalone events on the national calendar, the A4DE will see all three factory Husqvarna Enduro Racing Team members vie for outright, class, manufacturer and state honours. In 2016 it was Husqvarna-mounted Frenchman Mathias Bellino who claimed the overall victory.

Current Australian Off-Road Championship (AORC) leader Sanders won E3 last time the A4DE was contested during 2016, finishing fifth outright in Victoria. He also has an outright podium to his credit from 2015, when he took third overall in Tasmania and looks to improve on those results within E2 aboard the Husqvarna FE 450.

Stanford will take immense experience into the week riding a Husqvarna FE 501 after claiming runner-up in class behind Sanders at the most recent four-day. Higlett’s lone A4DE start came in 2016, when he scored an impressive sixth on debut in E1 and he returns on the Husqvarna FE 250 this time around.

The A4DE will formally commence with day one on Wednesday, 4 April, continuing through four hard-fought days of competition until the final moto at Cessnock Race Course on Saturday, 7 April.
Meet the Husqvarna Enduro Racing Team at Chris Watson Motorcycles (279 Maitland Rd, Cessnock NSW) on Thursday, 29 March from 5:00pm, including the race team bikes featured on display.

Christian Horwood – Team Manager, Husqvarna Enduro Racing Team: “The A4DE is certainly an important event and, this year being the 40th anniversary, there has been a lot of hype and promotion that has gone into it. Going back to Cessnock is great and the conditions are shaping up to be really good, with the recent rain in the area. All three of the Husqvarna Enduro Racing Team riders are ready following a strong opening round of the AORC and we have continued to work hard since then in the lead-up to the four-day. We’re all excited to head into the week, begin day one and hopefully have each of the riders in solid positions come the final moto next Saturday.”

Lachlan Stanford – Husqvarna FE 501: “I’m really looking forward heading into this year’s four-day, being its 40th year and there’s been a lot of interest back at Cessnock. I’ve heard it’s all coming together well down there and that the tracks are quality down there, so I’m ready for it. I’ve done quite a lot of A4DE races in my career now, so I will work with that experience and aim to ride the best I can throughout the week and see where we end up come the end of it. It’s a case of sticking with the plan as I’ve been working with Guy Andrews this year, recently focusing on sprints and hopefully that will result in more speed when we get to the four-day.”

Daniel Sanders – Husqvarna FE 450: “Being the 40th anniversary of the four-day it will be an important one to win and a lot of past champions will be there for the milestone occasion. I haven’t won the A4DE outright before, so it’s definitely on the list to do and coming off of a win in the AORC last time out, I have a good feeling knowing that I can be at the pointy-end. Anything can happen over four days, so I have to make sure myself and the bike make it through the first three days and then we can look where we’re at heading into the final day. It will be a big event and I’m really excited to go into race week.”

Fraser Higlett – Husqvarna FE 250: “This will be my second A4DE, so I’m still pretty new to this type of race, but I am looking forward to it and have had a lot of time on the bike since round one of the AORC. That’s given me confidence and I’m really looking forward to getting into it. My first four- day was 2016, so I will work closely with the Husqvarna Enduro Racing Team to learn as much as I can going in – it’s good to have Lachy and ‘Chucky’ there to lean on with their experience.”