Musquin wins as Reed races to ninth in Indianapolis Red Bull KTM’s Marvin Musquin has won round 12 of the 2018 Monster Energy AMA Supercross Championship at Indianapolis, standing atop the podium for the first time since the opening round of the season.

Anderson rebounded from a first turn pile-up for position, while Monster Energy Kawasaki’s Eli Tomac ran as high as second before he went down, ultimately claiming 15th place. Australia’s Chad Reed (Team CR22 Husqvarna) captured his best result of the year in ninth.

In the 250 East-West Showdown, Geico Honda’s Jeremy Martin – penalised seven points for jumping on the red cross flag – led all 21 laps of the final ahead of a wild battle for points with the two red plates tangling in a first turn pile-up. Monster Energy Pro Circuit Kawasaki’s Adam Cianciarulo was P2 ahead of Luke Renzland (Yamaha), who rounded out the podium with a solid third.

The 2018 Monster Energy AMA Supercross Championship will now take a weekend off over easter prior to resuming on Saturday, 7 April, in Seattle. 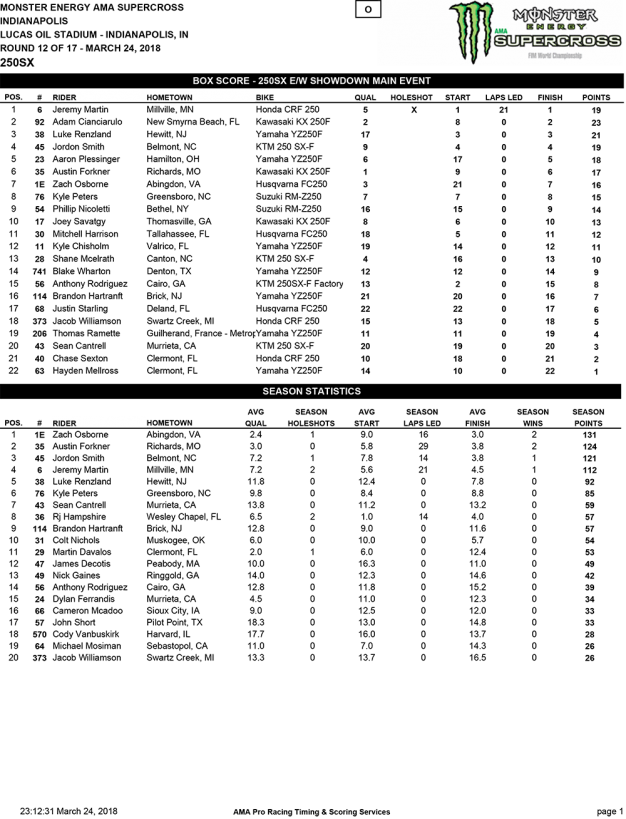