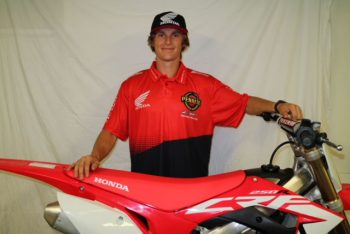 The factory backed satellite program will represent Honda in the 250cc class in Motocross and Supercross in 2018, welcoming two-time 250cc champion Jackson Richardson to the team to ride with continuing CRF Racing rider Kyle Webster.

Team owner Mark Luksich is very happy for the increased support and looks to secure top results right from the start.

“Honda has released an all new bike this year, the CRF250R and we have already achieved great success with it at the Coffs Harbour stadium cross. We feel Honda have provided us with the foundation to win and we appreciate the increased support,” said Luksich.

Richardson expressed his satisfaction with the teams’ pre-season preparation and the new bikes impressive capabilities.

“We have been working hard during preseason; we’ve raced in two events and achieved some outstanding results with the production bike. For the past three months, we have focused on the suspension and chassis and I believe it is capable of winning, as we have already proven.

We are now focused on the development of the engine and come round 1 we will be hard to beat.” Richardson said.

After sustaining a back injury at the end of the 2017 Australian Supercross season, Kyle Webster is back on the bike and making very positive progress. Team owner Mark Luksich is confident he will be ready for round 1 of the MX Nationals in April.

“Kyle is a fierce competitor and is determined to be ready for round 1 of the MX Nationals.  He is already training and we are happy with this progress,” Luksich said.

The Penrite Pirelli CRF Racing Team will compete this coming weekend in Adelaide at the Split Rhythm with Jackson Richardson.

Brand and Motorsports Manager Glyn Griffiths is looking forward to a big year ahead from all riders and teams.

“At Honda we have certainly increased our racing commitments and we are very pleased be involved in all levels of racing. We have an extensive field of riders and teams this year and we look forward to a terrific season all round,” Griffiths said.