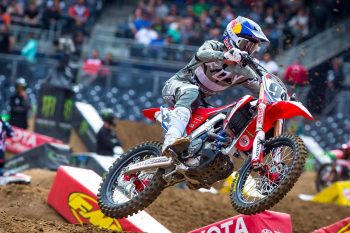 Team Honda HRC’s Ken Roczen was ruled out of the 450SX main event in San Diego with a fractured hand, sustained in a clash with Cooper Webb during the opening stages.

After going down in a chaotic first turn incident, Roczen was working his way up the order when he and Webb – who also encountered troubles – entered a scrap that resulted in both going down.

A social media post from Honda has indicated Roczen has fractured the second metacarpal in his right hand after his arm went between the rear wheel and swing-arm of Webb’s Monster Energy Knich Yamaha. Last year’s major injury was to his left arm.

“Ken Roczen had a tough night, getting sidelined early after coming together with Webb,” the post stated. “After initial evaluation by the Alpinestars Mobile Medical Unit, Roczen has suffered a fracture to the second metacarpal in his right hand. He’ll visit his doctor on Monday for further evaluation and more information will be released.”

There were further injuries in the final western regional round of the series, with Jake Weimer (Smartop Honda) suffering broken right wrist and two broken metacarpal bones, while Justin Bogle (Autotrader Yoshimura Suzuki) went out with a broken humerus bone in his upper-arm.

Update:
Roczen has since confirmed that he’s due to undergo surgery on his hand this Friday, hopeful of a quick return. More to come.