Former Australian motocross and supercross champion Dan Reardon is currently racing the the UK-based 2018 Power Maxed Arenacross Tour for the I-Fly JK Racing Yamaha team. Five rounds in and Reardon’s currently seventh in the standings coming off of a first podium in Belfast, so MotoOnline.com.au gave him a buzz to find out what it’s like racing indoors while the mercury dips into the minuses outside. 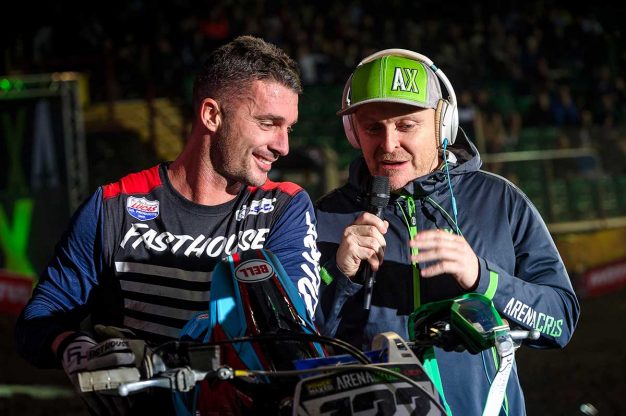 Dan, you’re racing in the UK at the moment. How did it all come about and how’s it going so far?

Last year we almost made it happen, but I received the offer to race in the US with Star Racing Yamaha, so opted for that. This year we started chatting earlier and when I received the offer I thought ‘you know what? Let’s go to a different country and race some bikes’. It’s been a lot of fun. Like, a lot of fun, but the racing’s been tough. Australians are kinda used to small indoor tracks, but these are smaller again. We’re talking 20-second lap times and the tracks are very basic, so it’s practically a stadium motocross track at most of the rounds. That makes it really tough, because if you don’t get it a good start, it’s so hard to have a solid weekend and you’re going to have to put in some very hard work. I’ve had no problems making the finals and I’ve been one of the quickest guys most of the time, but I’ve hit the ground in every main except for the last one at Belfast, where I finished second.

That must’ve felt great to finally get up on the podium at the most-recent round.

Yeah, even that one, I was sixth off the start, so if you’re not passing someone pretty much every lap, you’re going to run out of time. I got up to second and Thomas Ramette had a full straight on me, but I managed to close the gap, just ran out of laps. The racing is so aggressive and intense. Because the tracks aren’t technical, everyone nails everything in practice and nothing stands out as somewhere you can make time up. Everyone’s jumping the same obstacles, so there’s no choice but to make contact… I can tell you that I won’t be going to many birthday parties because of some of the rough passes I’ve had to do, but the tracks here don’t give you too much of an option if you want to win. I’ve pissed a lot of riders off here and got a bit of a bad reputation, but you just have to be brutal over here. It really is a lot different here and it’s hard to understand until you see if first-hand for yourself. Take the LCQ for example, it’s a one-on-one elimination race, so lap-times are out the window and it’s all about who can saw the other’s wheel off the hardest. You never want to be in one of those races!

Sounds intense alright! I guess the closest we’ve got to a small arena event is the AUS-X Open, so how’s the racing compared to that?

It’s still a lot different and the dirt is quite soft because it rains a lot and it’s hard for it to dry out. We’ve had two rounds where the dirt was a little harder, but most of the tracks are like a wet Coolum with soft, dark sand or clay with no real bottom to it and no hard base. The track builders are constantly fixing the track during the night as a result, probably too much as they don’t really let any lines develop.

What about the level of competition? Most of the racers there would be complete unknowns to the Aussie fan-base.

I had absolutely no idea about anyone when I first arrived. There was a new bike, new tracks, new country, new people, racers, I tried to take in as much information as I could, but it was three rounds before I started to figure out the racers. It’s so much easier racing people you’re familiar with, as you know their strengths and weaknesses. Generally, the series is dominated by French riders. There’s an Italian, a Portuguese, a few from the UK, but the French guys definitely control it. Coming from Queensland, the English winter must be a bit of a shock.

Mate, back home if it gets down to nine degrees I put a jacket on. Last night it was minus 10 in some places and about minus three here. The weather takes its toll, you can’t ride during the week as the tracks are too wet or icy, so we just turn up to the races, then wait a week or two for the next one. Every day I’ll train in the gym, then go look at a castle – I’m getting over that now though [laughs]. There’s so much history here and I’m now making a point of making sure I get out and see some of the sights when I travel, instead of just sitting in airports.

What are your plans once the championship finishes?

I fly back to Australia on March 3 and my priority is to finish building my house. From there I go to the US with the Fasthouse guys and do a few different races there. I’m not exactly sure what races yet, but it’ll probably be one-off events like Mammoth Mountain, maybe a round or two of AMA Supercross or Pro Motocross, whatever gets a lot of publicity and is still a good, fun weekend of racing. Then I’ll come back to Australia and race the supercross again at the end of the year.

So still no MX Nationals?

No, I’m not interested in that any more. I do what I want to do, which is supercross and travelling. Motocross for me just takes too much time, dedication and effort and I don’t want to go through that again and again – I’ve already done it for so many years. This year is going to be completely different to the norm for me and I’m really looking forward to it and the different experiences that will come my way.

Sounds like a great time! Thanks for the chat mate and best of luck for the final couple of rounds over there.

Thanks mate, appreciate it.