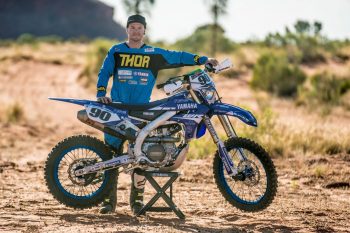 Yamaha Motor Australia and the Active8 Yamalube Yamaha Race team wish to pass on our deepest sympathies and sincere condolences to the family, friends and colleagues of Daymon Stokie, who tragically lost his life last weekend while competing at the Deep Well Desert race in the Northern Territory.

Daymon was a valued, successful and close friend of the Yamaha racing family and his passing has devastated the racing community as he was held in such high regard.

“Not only was Daymon an incredibility talented, fearless and dedicated racer but also an awesome human being, team mate and friend to us all,” states Active8 Yamalube Yamaha team manager, AJ Roberts.

“Our memories of Daymon are special and we will hold them close to us and drive us to succeed. He passed doing what he loved and it wouldn’t have been at anything less than 100%. Rest in peace, legend,” AJ ends emotionally.

Those sentiments are matched by those of teammate, Josh Green, who has raced and worked alongside Daymon over the past few seasons.

“He was more than just a teammate. He was a great friend, an amazing racer and an inspiration to us all. I’m so glad I had the pleasure of having you a part of my life. Tear up God’s country, bro! Forever the King of the Desert.”

Stokie crashed on Saturday while competing at the Deep Well desert race. Riders and mechanics nearby rushed to his assistance while paramedics scrambled to get to the fallen rider but despite their desperate attempts, they were unable to revive him. Stokie was 28 years of age.

Arguably his greatest racing milestone was victory in the 2017 Finke Desert race. Up against some stiff opposition and a challenging racing surface, Stokie not only overcame his rivals but also raced with a broken hand to claim the victory in a testament to his toughness and determination as a racer.

Thanks for the memories, Daymon!