Assessing the first three events of the 2018 season in America.

The opening trio of rounds of the 2018 Monster Energy AMA Supercross Championship have been a scintillating affair so far. Just when you think you’ve got your tips and fantasy teams figured out, the format changes and the cats are thrown among the pigeons again. With so much action going down early so early in the season, we take a look at how the first three rounds at Anaheim and Houston have stacked up. 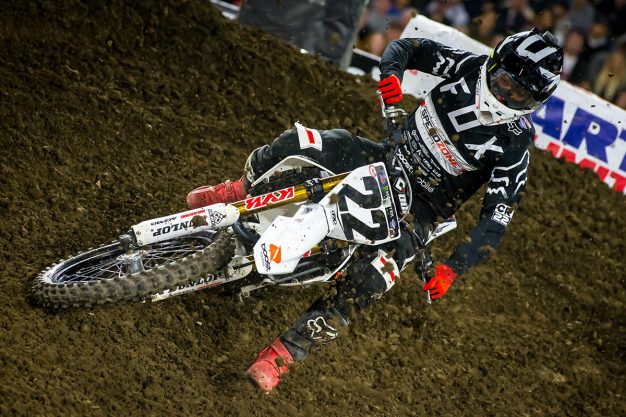 Round: One – Anaheim 1
Rating: A
Rundown: All the hype, speculation and pre-season talk was put to rest with the gate dropping on the opening round. And there’s one thing you can always guarantee at the first round of the championship – there will be upsets and Anaheim 1 had plenty. While Red Bull KTM’s Marvin Musquin continued his terrific off-season momentum with a great ride to the win, pre-season favourite Eli Tomac (Monster Energy Kawasaki) crashed out while leading the race and received a shoulder contusion for his efforts, as Rockstar Energy Husqvarna’s Dean Wilson also had shoulder dramas with a crash in his qualifying heat. Meanwhile, Ken Roczen (Team Honda HRC) was the talk of the night with his superhuman comeback from an arm injury almost a year ago to finish fourth. On top of all the on-track kerfuffle, there was a number of structural changes to keep the sold-out crowd interested, including a new, slightly-tweaked points system and steel gates that were introduced for the first time. On the downside, the move back to two heats and an LCQ (rather than the two heats, two semis and an LCQ we saw up until last year) felt like a step back in time.

Round: Two – Houston
Rating: B+
Rundown: Off the bat, the AMA Supercross circus moving to Houston, rather than its recent tradition of sticking to the more typical coastline was something that pricked up the ears of moto fans. The racers encountered a technical track that seemed like a big jump from the season-opener a week before. Eli Tomac (pulled out of practice) and Dean Wilson (out following press day) were still warming the bleachers for the main event, but they weren’t alone, with championship leader Marvin Musquin ejecting over the bars and also injuring his shoulder in the heat race. He missed the main, leaving Jason Anderson to sort out a rapidly-improving Ken Roczen and fast-starting stand-in rider Justin Barcia (Monster Energy Knich Yamaha) on his way to staking claim to the championship lead. Meanwhile, in the 250s, Aaron Plessinger (Monster Energy Yamalube Yamaha) took the bit between his teeth and tore to his first win of the season, snatching the red plate from Anaheim 1 winner, Troy Lee Designs Red Bull KTM’s Shane McElrath in the process. 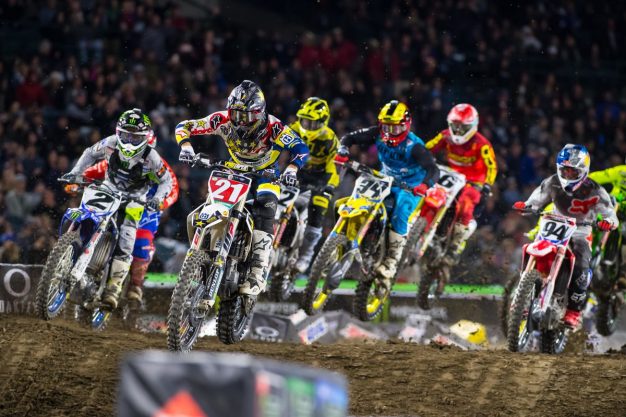 Round: Three – Anaheim 2
Rating: A-
Rundown: The return to Anaheim was eagerly-anticipated as it was the first of three Triple Crown rounds this year and the only one that West Coast 250SX riders will race. Riders qualified straight from qualifying (no heats), with an LCQ to sort out the final four spots (won by Chad Reed in the 450s). That meant the fans were treated to three main events in each class of increasing time length. The fotmat used the Olympic scoring, where first place in a main event gets one point, 10th gets 10 points, etc, with the rider with the least points winning the overall. We knew it’d shake things up, but wow, we didn’t think it’d have as much of an impact as it did. Eli Tomac returned to the madness and was welcomed back to the top of the podium, courtesy of a 5-1-2 result, with a super-impressive Cole Seeley (Team Honda HRC) in second (1-2-7) and Jason Anderson third (7-3-1). Plenty of the series’ fast-starters struggled with the short, high-intensity motos – Barcia finished eighth, Roczen ninth and Musquin 13th after pulling out of the final moto. The 250s were filled with drama too, as Joey Savatgy (Monster Energy Pro Circuit Kawasaki) chalked himself down as the third winner in as many races, courtesy of a consistent 1-2-1 result. While not everyone was happy with the changed-up format, the vast majority of people – including the paying spectators, who got to see more of their favourite racer on track – seemed to welcome the new style of racing. The only factor stopping Anaheim 2 gaining our A rating was the fairly non-challenging track. While it kept the racing tight, it made passing difficult and the racers couldn’t find that little extra something to make up some time each lap.