Keeping track of the incredible storylines that have surfaced in 2018.

We’re currently deep into the two-week suffer-fest of man and machine that is the Dakar Rally – almost 9000km of desert, floods, mountains, heat, rain and snow across Peru, Bolivia and Argentina, with three days at more than 3000m in altitude. It’s hardly a wonder that this year’s event has been a heart-breaker for many, with barely a day going by without some sort of drama. With so much happening, MotoOnline.com.au thought it was high time we’d answer some of the burning questions. Q: What exactly set back Toby Price earlier this week?

A: Price had had a solid start and had been chipping away at the eight-minute overall lead heading into the 10th stage from Salta to Belen. However, late in the stage, five of the top six riders including Toby got lost in a river bed and strayed almost 10km off-track for more than 50 minutes. As a result, the Maitland-born off-road champion hemorrhaged time on his way to 19th for the day. He rebounded overnight by winning stage 11, which boosts him back to third overall and it’s not over yet!

Q: How did defending champion Sam Sunderland crash out?

A: 2017 Dakar winner Sam Sunderland was making serious inroads into defending his title when he had injured his back on the fourth stage in the dunes of Peru and had to be air-lifted out. While searching for a waypoint, the English Red Bull KTM rider dropped into an unseen sand pocket at high speed. He didn’t actually crash, but hurt his back and tapped out of the rally due to the pain and the fact he was losing feeling in his legs. He’s compressed two discs in his lower back and is expected to make a full recovery.

Q: Who else has had trouble?

A: It’d be easier to answer who hasn’t had trouble! Monster Energy Honda’s Joan Barreda was running at the front of the pack during the seventh stage from La Paz to Uyuni (452km) when he crashed and badly injured his knee. Although he thought he’d broken it and could barely walk on it, the gritted his teeth and soldiered on for another 100km to the bivouac, where he was eventually cleared of any major injury. It all became too much in stage 11 though, finally opting out after ‘one too many crashes’. Meanwhile, stage 10 held more drama than just the river-bed chaos mentioned earlier, as longtime rally leader Adrien Van Beveren (Yamalube Yamaha Official Rally Team) was well on the way to taking a massive lead in the standings when he had a high-speed crash just three minutes from the finish line and has now DNF’d the race. He suffered a broken collarbone, injured thorax and spine, spelling heartbreak for the French rider and Yamaha. 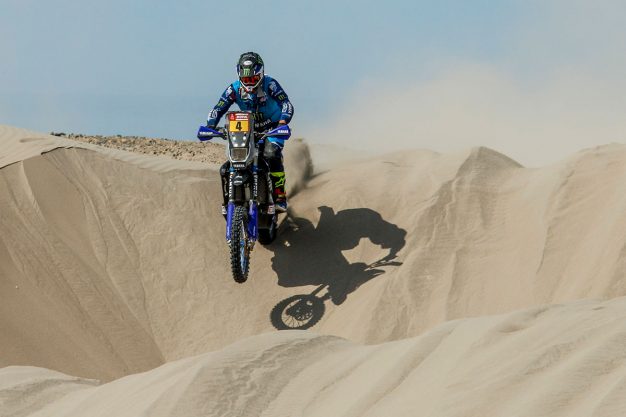 Q: When was the last time a non-KTM rider won?

A: KTM has enjoyed an incredible string of victories at Dakar, winning a massive 16 on the trot. The last time a non-KTM-mounted rider won a Dakar Rally was way back in 2000 when Frenchman Richard Sainct won on a BMW and the orange brigade is looking good again with Red Bull KTM’s Matthias Walkner currently out front by over 30 minutes with a few days to run!

Q: Who’s the next best Australian behind Price?