As a rookie in the MX2 World Championship with Team Suzuki this year, Queenslander Hunter Lawrence became one of the stories of the season to establish himself as a legitimate threat for round wins and a title in the future. With overall podiums in Germany, the United States and France – including a moto victory at the final round – alongside a glowing performance for Team Australia at the Motocross of Nations where he won the MX2 class, it was an impressive season for the incredibly talented and dedicated 18-year-old. Next year he will transfer to Team Honda 114 Motorsports for a final year in Europe prior to moving to America with Geico Honda in a multi-year deal that will see him ride red through 2021. MotoOnline.com.au spoke to Lawrence this month to get his take on the year that was. To start with we’ll look back on the season – your first in the MX2 World Championship – and it was a really strong one. How would you sum up your year?

It was good, you know. It definitely had it’s ups and downs, I learnt a lot and it was good. We had some good results, three podiums, so that was cool and a good little reward or something that keeps you going after a while, when you’re working so long and not getting results out of it. It gets tough, so to get them little pick-ups through the season, it was good just to get the fuel burning. We made our rookie mistakes and my back injury was also just part of a mistake on my behalf, so I was out five weeks with that. We didn’t get through the whole season uninjured, had that time off, but I think we recovered quite well and even better than some thought maybe. I’m happy with it though, the mistakes I made this year I don’t think we will be making next year, so that’s good and obviously we still have more to learn. All in all it was a good rookie season, which of course, could have been better, but you know.

If you had to pick out one, what would you say was a particular highlight?

One highlight for me, I think, would have to be… in all honesty, there are two. The two were Indonesia and Russia, because they were the most muddy GPs and the ones where I learned the most. They weren’t the best results, but two rounds that were a big learning curve for me, and out of the whole season, those were the races that I got the most out of – I sort of needed them to build myself as a rider. They really helped and will help in the future to be a better racer.

We in Australia have been well aware of Hunter Lawrence for a lot of years now, but last year was your first in Europe riding EMX250 and this year you built upon that in MX2. What’s life been like to now be on the international radar, to be really popular here in Australia and well-respected globally as well? It must be a bit of a buzz after chipping away at it and now really beginning to ‘arrive’ in some ways.

Yeah, thanks. Like, it’s cool and, I mean, my name is slowly getting bigger, but I don’t think of that – it never crosses my mind. As far as I’m concerned, I’m still a nobody and I haven’t made something of the sport yet. I may be a rising talent or something, but I’ve still got a long way to go and I just like to keep my feet planted to the ground. You don’t want to pull up at the practice track and try to puff your chest out because you’re some name or whatever, because I just love to have fun and race my dirt bike. This year, from round six onwards, I was just enjoying it and that’s all I want it to be next year as well. I’ll get my best results from that and, yeah, what we’re working for is to be someone in the sport, but I never really think of myself having a big name. I have got a lot more supporters over here in Europe since last year, but I try to treat them like normal people and not like fans by putting them on a level below or something like that. I try to walk in the same shoes that I came over to Europe with.

What I noticed was, especially when MXoN was on, the Aussie support you have generated was really evident. How did you enjoy that event, which was obviously a really, really impressive showing from yourself?

The Nations was awesome and such a crazy event. It would have to be one of the coolest races of the year and I was really surprised how much Aussie support we had at the event also – it was unreal. It’s a long way from Aussie and next year’s at RedBud, so I know a lot of Aussies love going to the States and I hope we can have a massive turn-up there of Aussies! It’s cool to race for your country, was good to catch up with Gibbsy [Kirk Gibbs] and Deano [Dean Ferris], plus all the guys that came with them. It was a lot of fun and for me it was quite relaxed, because I’m an easy-going and relaxed guy, so that was a real fun weekend. We had such a cool track and, yeah, maybe the rain had a bit to play in it [laughs], but all in all it was awesome. Having the support of Australia means the world and, when they talk about Nations, people say some riders go even faster, which makes you think how it’s even possible. Every time you’re on the bike you are trying to go fast, but it was a whole other level and the atmosphere makes you pumped to race for your country as well. It’s awesome, so I hope I get the chance to race for Team Australia again. 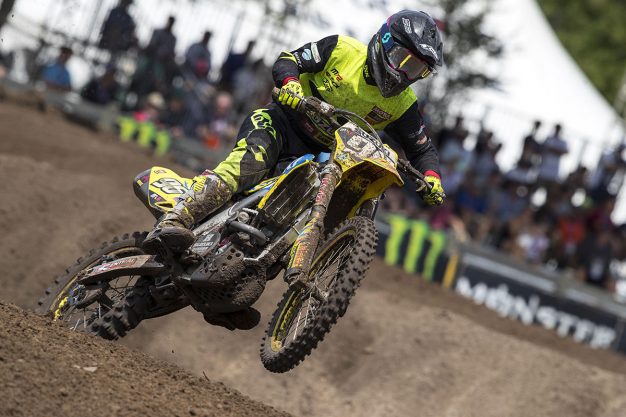 Does that type of experience make all the sacrifices worthwhile, not only of your own, but your family’s as well?

Oh yeah, for sure. For sure. As far as living situations go, in Belgium here it’s not the best. It’s never really great weather and everything is so different to Australia, but the motocross is what we’re here for and the motocross is everything at the moment. So yeah, when you have a great weekend like that, when you’re working hard and getting out what you put in, it’s everything. It’s extremely rewarding and all of the hard times and struggles disappear at that time, because you’re just so pumped on what you’ve been working so hard on, like you get it. It’s not from relying on someone else or… it’s on your shoulders, putting in the hard hours during the week and your mechanic is stoked because of what he’s putting in, so it’s just so rewarding for everybody in your little circle of people, involved in your program. It’s just as rewarding for them as it is for you.

The big news recently has been that you’ve done a multi-year deal with Honda into the future, so sitting here at the base of that, it is a good challenge ahead and a nice structure to be in after Suzuki withdrew its MX2 team.

Yeah, that’s really cool, you know. I have the opportunity to stay here in Europe next year, get a year on the Honda – we’re testing for each-other a little bit so that information is great for all of us – and then after next year in 2019, ’20 and ’21, we’re with Geico Honda in America. It’s really awesome and I’m stoked because, as a kid growing up in Australia, everyone wants to go to America. We looked at how to end up there, looked to what goals we wanted to achieve, so we took the route that we believed we had to take to make that step, so to see it all sort of panning out is really cool. I’m super-pumped.

I know you don’t want to be stacking on the pressure before the one last season in Europe, but it’d be nice to get a world championship before heading to the US, wouldn’t it?

For sure. After knowing what I was capable of in my rookie year, at the end of the season when things started to click and we got the program rolling, I know what I am capable of. Yes, it’s a big ask for a second year, but it’s possible and not impossible. I just have to figure out what I need to do with myself, mentally and physically to make it happen. That’s what I’m going for, mentally I’m not putting pressure on myself because it is what it is, but I’m just going to ride the best I can and whatever the results are, they will be. So, that’s my mental state of mind at the moment and obviously it might change by round one, but I want to keep it in my head that we’re going to have fun and race my dirt bike around a track. That’s all it is at the end of the day when you simplify it.

That’s definitely true. Well thank you mate, good to chat and hopefully we will be speaking to you again early next year!

No worries, yeah thank you, looking forward to it.