Racer comments from Queensland's sixth round of the season.

A selection of riders detail round six of the 2017 Australian Supercross Championship at Jimboomba X Stadium in Queensland. Team and privateer competitors can submit comments to [email protected] by Monday afternoon after events for inclusion in the post-event Quotebook feature. 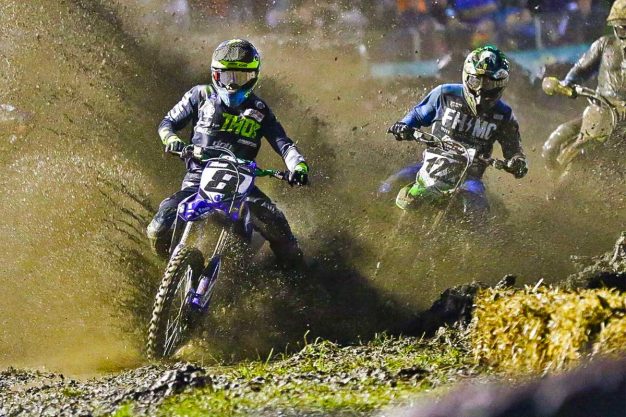 Nick Schmidt (Wilson Coolair Motul Factory Suzuki) – First:
I’m definitely excited. I felt good all day and coming in to the round we had a great week. We’ve had some bad luck so far this season but we managed to turn it all around. I got a decent start in the main event and I was sitting in fourth and I just put my head down and got to work. It was so muddy but I just kept picking off guys and making my way towards the lead. My mechanic just kept telling me to keep it on two wheels and I was determined to put Suzuki on the podium. A lot of crazy stuff went on after the race but the officials looked at it all and they ended up giving me the overall which is awesome. I wanted to get Suzuki a win and we got it done. I’ve loved being over here, the Wilsons Coolair Motul Suzuki team is like a family and they’ve really welcomed me into their team. I’m so grateful for the opportunity and I’m glad I could put Suzuki on the podium.

Kade Mosig (DPH Motorsport Yamaha) – Second:
What a way to finish 2017. A good start in my heat put me in control of the pace and I managed to win with a comfortable margin, so come the main I focused on that start and managed to get round the first turn in front. The rest of the race was a battle to get around and I felt like I had a good rhythm, despite slipping and sliding all over the track just like everyone else – at one point I launched over a berm! By the end, I was in a lot of pain and that chequered flag couldn’t come fast enough. I had an up and down series, not exactly the results I set out for, but happy to get a couple of podiums. A huge thank you to the team and our sponsors for sticking by me and giving it everything we had all the way to the end. Also a big thanks to the promoters for giving us an Australian Supercross Championship to race. Thank you and bring on 2018!

Todd Waters (Crankt Protein Honda Racing) – DNF:
We did what we had to do, but in the end it didn’t work out for us. On a positive side, we rode well in the heat race and we got the win there. We led that confidence into the main, but unfortunately we ended our night in the middle of a jump and I couldn’t start my bike, so basically that was a wrap for the race and the year.

Justin Brayton (Penrite Honda Racing) – Fifth:
Tonight was the toughest supercross race I think I have competed in – it was a matter of survival. Riders were crashing without warning, so I needed to remind myself throughout the final that to win the championship we needed to finish. It’s an enormous effort by everyone to make this happen. Honda throughout the world came together to win this championship and all of our partners did the same. It’s a championship without borders and I am proud of what we achieved.

Joel Wightman (Penrite CRF Honda Racing) – Seventh:
I was really happy to finish second in my heat race, as I basically stayed out of trouble and rode consistent laps. But by the time the final came around, not many jumps were getting attempted it was a true mud race. In the final my plan was to just stay on two wheels and I managed to do that – with only a few near misses! I finished seventh, which is my best result of the series and a good result to finish off the season with. I finished 10th overall in the SX1 championship in my rookie season in the class and with three Americans ahead of me and after an injury-riddled year, I’m somewhat satisfied. Missing the final on the second night at the AUS-X Open last weekend cost me in the overall standings, but I’m looking forward to a big off-season now to reset and get prepared for 2018. 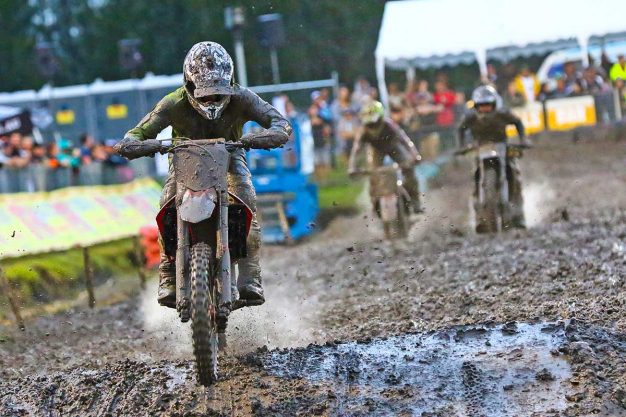 Chris Blose (Penrite Honda Racing) – Second:
This round was tough, there was little to no grip and vision was hard. I am glad I could provide the team its fifth podium finish in the SX2 class and I hope I can come back to race the entire championship.

Nick Sutherland (Penrite CRF Honda Racing) – Sixth:
In my heat race I got an okay start but binned it in the second corner. But I kept my hands on the bars and got back up to make it to fifth at the finish. In the final I made another okay start, in the top five again, and was running top five for the majority of the race, but the longer the race went on, the harder the track got. I crashed twice with two laps to go, which cost me a top five finish, but to finish the final in sixth place, which gave me seventh overall in the championship, was a good way to complete the series and to say thanks to the Penrite CRF Honda Racing team and all the team sponsors and my supporters who made this opportunity possible.

Jay Wilson (Raceline Pirelli KTM) – First:
Wow! The last round at Jimboomba was absolutely everything I’ve been working towards – we qualified fastest, won the heat race and the main event so we couldn’t have done any more. My fiance, my daughter, my brother and my mum were all here for this moment and I’m so proud that I could do this for them. The conditions were absolutely brutal – we had so much rain before we went racing but I just rode the track for what it was, stayed patient and made sure we got the starts that we needed to get the win. At the halfway point in the year Chris Woods and Raceline gave me a life-line, it was the opportunity to go racing with no expectations, and to just try and get back to where I know that I belong. Finally, we got there, and the hard work has certainly paid off, so I can’t thank everyone enough for their support – I can’t wait for 2018.

Morgan Fogarty (Raceline Pirelli KTM) – Fifth:
The last round was really good for myself and the team. I got decent starts and we capitilised on the conditions that we were faced with. In the main I just rode my own race. You needed to be smart riding the mud, and I knew if I could keep it on two wheels that we had a good shot at getting a solid finish – we did that and I managed to finish fifth overall which is awesome. I’m super pumped to finish the series with my best result of the season especially on such a challenging track. I’ve loved this year with the guys at Raceline Pirelli KTM, we have learnt so much and got some really good results – I’m looking forward to next season and putting all of that knowledge to good use.

Wilson Todd (DPH Motorsport Yamaha) – Seventh:
I wasn’t worried when the rain rolled in, I’m comfortable riding in those conditions, so when it came time to qualify I rode around then put in a few faster laps and parked it up. I got similar strong starts in both the heat race and final, but hitting a soft spot in the first section threw me off track and put me in the pack. A few more mistakes by me and a few others made it hard to move forward. I’m really happy with the how I rode all championship and I got stronger as the season went on. Congratulations to Jackson Richardson on taking the championship and a huge thank you to Dale, Ben and the entire DPH Motorsport team, along with all our sponsors and supporters for believing in me all year. To have second in both motocross and supercross is incredible!

Jackson Richardson (Serco Yamaha) – Fourth:
It has just been a crazy day. The conditions of the track are probably as bad and as tough as I have ever raced and to have an Australian championship on the line on a day like today just made it hard on the bike, the team and any rider who started the race. It wasn’t easy out there! I saw a pit-board that said Wilson [Todd] was down, but you can’t relax on a track like this and I tried to put that out of my mind, stay focused in the moment and keep it on two wheels. The longer the race went on, the worse the track got, but thankfully we were able to get it done and that’s all that matters in the end. Thank you to everyone at Serco Yamaha for their support. We started the supercross season a bit behind the eight ball as I had just come off injury but we all kept working at it and we wound up with another championship tonight. Its an awesome feeling and there are so many people that play a part in it.