SX1 and SX2 class updates direct from round six in Queensland.

Post-race updates from the SX1 and SX2 classes at round six of the 2017 Australian Supercross Championship, direct from Jimboomba X Stadium in Queensland. 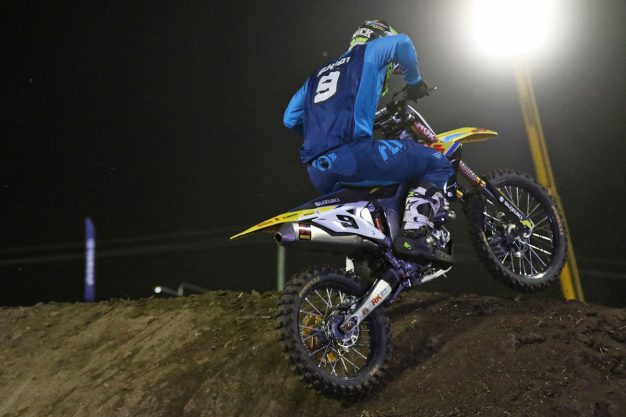 Pre-event:
It’s looking like it will be a mud-soaked round this afternoon and into the evening, which has resulted in minor revisions to the schedule. Practice and qualifying sessions have been slightly delayed and combined as a result of the conditions, however once we get to the night show later on, all is set to go on as planned (the finals have been bumped forward) to determine the 2017 championship winners in this, the title-deciding finale.

SX2 heat one:
Entering the final round trailing points leader Jackson Richardson (Serco Yamaha) by five points, Wilson Todd (DPH Motorsport Yamaha) got his evening off to a flying start by dominating the opening SX2 heat in wet, difficult conditions. His winning margin following seven laps was 12.905s from Jesse Madden (KSF Racing Husqvarna), who has looked solid all day in the mud, followed by Lochie Latimer (Yamaha) and Chris Blose (Penrite Honda Racing) after he recovered from a crash in the second turn.

SX2 heat two:
After qualifying quickest in class this afternoon, the second of the SX2 heats was all Jay Wilson (Raceline Pirelli KTM), winning by over 11 seconds – less than a week following his confidence-inspiring AUS-X Open podium – from defending champion Richardson, who was in turn almost a minute ahead of Dylan Wills (Dyson Motorsports Husqvarna). He is riding with a broken hand sustained in Sydney, hoping to keep his shot at a top three championship result alive at the final round.

SX1 heat one:
Drama struck at the beginning of the opening SX1 heat as number one plate-holder and points leader Justin Brayton’s Penrite Honda wouldn’t fire, forcing him to revert to his back-up CRF450R. Out front early it was rookie Nathan Crawford (Mega Fuels Monster Energy Kawasaki), however Todd Waters (Crankt Protein Honda Racing) would soon take control and go on to win by 23 seconds from Joel Wightman (Penrite CRF Honda Racing) and Crawford. Fourth was Dylan Long (CDR Yamaha), while Brayton circulated for fifth and a lap down on Waters following difficulty on the final lap.

SX1 heat two:
DPH Motorsport Yamaha’s Kade Mosig picked up the second SX1 heat race win, initially leading but enabling Dean Ferris (CDR Yamaha) to go past after an early error. Ferris then stalled and later crashed, which ultimately saw Mosig go on and win by 14.7s over Dan Reardon (Mega Fuels Monster Energy Kawasaki), who incredibly bounced back from an incident in the first turn. Third across the line was Wilson Coolair Motul Suzuki import Nick Schmidt, while Ferris – after claiming the quickest lap of the race in the latter stages – eventually crossed the finish in fourth position.

SX2 final:
When the gates dropped for the title-deciding SX2 final – reduced to 10 laps because of the diabolical track conditions – it was Wilson who stormed to the front early and from there he was never headed. The 2015 outdoor champion established himself in the lead by stretching a significant advantage in the early laps, before going on to win by 51.291s at race’s end. It was a special result for Wilson that sealed him third in the standings, tying on points with runner-up Todd. Fourth tonight was enough for back-to-back champion Richardson to successfully defend the 250 class title despite remaining winless this season, capitalising on his remarkably consistent run across the six rounds. Runner-up at Jimboomba was Blose, who made it three podiums from three starts on-board the CRF250R in place of Gavin Faith, while a gritty Wills rounded out the podium in P3. Fifth was a solid result for Wilson’s Raceline Pirelli KTM teammate Morgan Fogarty, the newcomer taking position ahead of Sutherland and title-challenger Todd. The latter went down on the opening lap and never was able to recover, but only just managed to hold onto second in the standings on count-back.

SX1 final:
The 15-lap SX1 main event went down to the wire between rookie wonder Crawford and US import Schmidt, but it was the highly-rated Australian who scored his first-career 450 victory – crossing the line just 0.903s in front! Crawford’s win was a fairytale send-off for Carroll Motorsports, which won’t continue in 2018, while behind them it was Mosig who capped his year off with a well-deserved rostrum result, a lap down on the leaders. Early leader Reardon dropped down the order after a number of mistakes before surging back to fourth, however it was at the fifth-place finish of defending title-winner Brayton that saw him capture a second-consecutive premier class championship – albeit two laps down in truly challenging conditions. At the conclusion of the final, which was reduced by five laps because of the conditions, there were only nine riders who made it across the finish in the end.

Update: Crawford was docked two positions by race officials post-race for a late off-track excursion, denying him the victory and instead handing it to Schmidt from Mosig, with Crawford credited third.