The Monster Energy AUS-X Open continued to impress in its third edition hosted last weekend at Sydney’s Qudos Bank Arena, delivering a number of memorable moments that fans will remember for a lifetime. In this latest instalment of Countdown, we look at at eight topics that still have us buzzing! 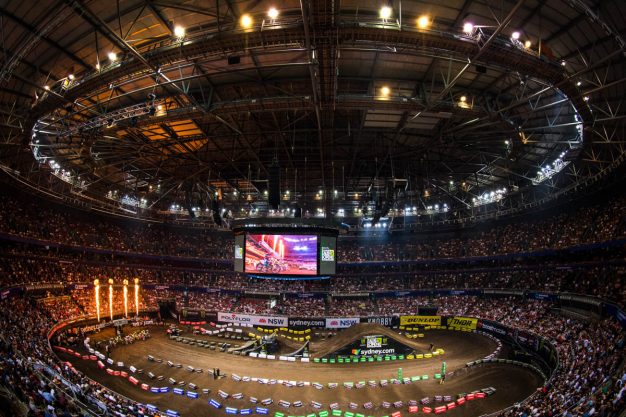 8. FMX Best Whip:
Every fan enjoys a good whip, which is why the FMX Best Whip competition was a favourite amongst many. The FMX crew certainly delivered, throwing down a number of different styles that had the crowd roaring. Queensland’s Corey Creed ultimately took out the comp on both nights, with his whips almost seeing him clock around to 180 degrees.

7. Marshall delivers:
Much to the officials displeasure, Robbie Marshall has been known to throw down backflips off the finish line jump during racing at the past two editions of the AUS-X Open. With an appropriate ‘who wants to see a backflip’ sticker on the back of his helmet, the Queenslander didn’t let the fans down, flipping his way to fourth in the second SX1 semi on Saturday.

6. Opening ceremonies:
Kickstarting the night saw an unreal pyrotechnics and fireworks show that certainly got the crowd amped for the night ahead. Along with an epic video production that was displayed on the mega-screen, a host of riders who were uniquely introduced, while a select favourites were interviewed by former Australian supercross ace Danny Ham.

5. Wilson’s shoey:
After claiming a thrilling win on the opening night of the AUS-X Open, visiting international and Rockstar Energy Husqvarna Factory Racing rider Dean Wilson celebrated in the most Aussie way he could with a shoey, much to the delight of local fans. It later took social media by storm as images and films made their way onto the web. 4. Sheeny’s double backflip:
The FMX Best Trick competition had the crowd on the edge of their seats, especially as Western Australian Josh Sheehan successfully completed a double backflip on both nights of the event, taking home the gold during Saturday and Sunday’s edition. It marked the first double-flip to be staged during the AUS-X Open, and it’s definitely something that will stay fresh in our memory for a long time to come.

3. Epic crowd:
Over 27,000 fans made their way into Qudos Bank Arena during the two night, with Saturday’s show being completely sold out! It was surreal being inside the arena as fans cheered for their favourite riders and roared every time something eventful unfolded. It created an unreal atmosphere and was truly amazing to be a part of.

2. Carmichael and Ronnie Mac 2-Stroke Showdown:
The highly-anticipated 2-Stroke Showdown between the Greatest of All-Time Ricky Carmichael and internet sensation Ronnie Mac lived up to the hype, and I think every fan who witnessed the action can vouch for that. The duo were highly-entertaining, both on-track and on the microphone as they dished out banter for the world to see. Two key moments that come to mind is Carmichael’s take out, which later saw Ronnie Mac get taken down by Carmichael’s security as he retaliated post-race.

1. Unreal racing:
Coming it at number one is the number one reason we’re there – to witness close, intense and hard-fought racing. It’s exactly what happened during both nights, right from the initial heat races, all the way through to the main events. Saturday’s SX1 main served up a thriller, as favourites Jason Anderson (Rockstar Energy Husqvarna Factory Racing) and Justin Brayton (Penrite Honda Racing) were forced to come through the field after crashing in turn one.