Post-race updates from the SX1 and SX2 classes at round five of the 2017 Australian Supercross Championship, direct from Monster Energy AUS-X Open Sydney inside Qudos Bank Arena. 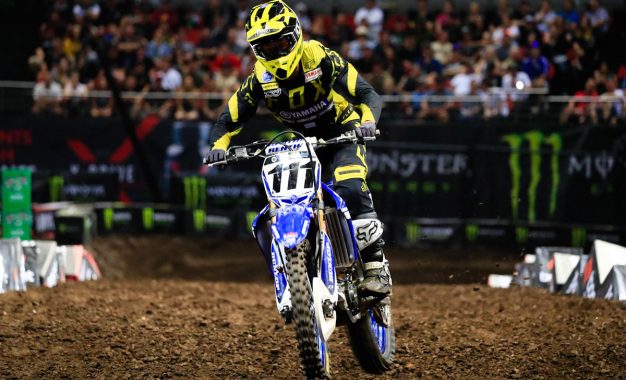 SX2 heat one:
After winning last night, DPH Motorsport Yamaha’s Wilson Todd continued his strong run of form by winning the opening eight-lap heat race of the afternoon, getting out front from the start and going on to win by a full three seconds. Behind the series leader was Jay Wilson (Raceline Pirelli KTM), transferring directly through to the main after getting the better of Jesse Madden (KSF Racing Husqvarna).

SX2 heat two:
It was a controlled performance from American Chris Blose (Penrite Honda Racing) to win heat two, 2.1s up on defending SX2 champion Jackson Richardson (Serco Yamaha) after the latter posted the quickest lap of the race and went straight to the final. Ever-aggressive early leader Geran Stapleton (Honda) crossed the line third, as he and the rest head to the semi-finals. Despite breaking his hand on Saturday, Dyson Motorsport Husqvarna’s Dylan Wills lined up and brought it home a conservative fifth.

SX1 heat one:
Headline American Jason Anderson (Rockstar Energy Husqvarna) was untouched in a relatively uneventful opening SX1 heat, jumping out of the gates to lead and crossing the line with a sizeable 7.3s advantage following eight laps. In a sign of his form entering night two, Anderson dominated from Dan Reardon (Mega Fuels Monster Energy Kawasaki) – also going into the main event – a couple of seconds up on Geico Honda’s RJ Hampshire, who in turn edged out Nick Schmidt (Wilson Coolair Motul Suzuki) for position.

SX1 heat two:
Opening night winner Dean Wilson rode his Rockstar Energy Husqvarna to another win in the second 450 heat of Sunday, leading the duration for a 1.8s victory over current AUS Supercross number one plate-holder Justin Brayton (Penrite Honda Racing), who posted the quickest lap of the round so far at 31.246s. Brayton capitalised on an error of Kade Mosig (DPH Motorsport Yamaha) in the whoops, however the latter recovered to cross the line in P3 but unable to match the outright lap pace of the imports.

SX2 semi-final one:
It was a wire-to-wire win for Jesse Madden (KSF Racing Husqvarna) in the first of the SX2 semi-finals by two and a half seconds, however it was behind him where much of the action took place. Unfortunately for Jye Roberts (Husqvarna) he went down in the first corner while running second, appearing to injure his left knee in the process, handing the transfer spots to Bailey Malkiewicz (Husqvarna) and Taylor Potter (Honda).

SX2 semi-final two:
Crowd favourite Stapleton – mullet and all – took another popular win in semi-final two of the 250s, 1.9s up on the initial leader Wills after edging his way to the front, as Sutherland completed the top three and made his way into tonight’s final. He was pressured all the way to the line by Yamalube Yamaha Racing rookie Cooper Pozniak for position.

SX1 semi-final one:
CDR Yamaha talent Dylan Long impressed by taking out the first of the SX1 semis, starting out from and staying there for the entire six laps. He finished 1.9s ahead of Hampshire, who usually rides a 250 back home in the US, while fellow American Schmidt trailed him again – all three going through to the final here during the second show of the weekend.

SX1 semi-final two:
Current two-time MX Nationals champion, CDR Yamaha rider Dean Ferris, mirrored his team-mate’s result by winning his semi-final, 1.7s ahead of Nathan Crawford (Mega Fuels Monster Energy Kawasaki) – who led five laps of last night’s main – and Mosig. All three of those guys will go into tonight’s final, while a major mistake from Todd Waters (Crankt Protein Honda Racing) in the back-half of the whoops will see him forced to go via the LCQ if he’s going to factor later on.

SX2 LCQ:
It was a dramatic start to the SX2 last-chance qualifier, as a pile-up entering the tunnel on lap one saw Callum Norton (KTM) and a number of other riders bumped out of contention. At the front though Pozniak inched his way to the final, as did Morgan Fogarty (Raceline Pirelli KTM) in the runner-up position.

SX1 LCQ:
The SX1 last-chance qualifier produced a few surprises, as FMX ace Robbie Marshall rode his privateer Honda to victory from American guest Daniel Herrlein (KSF Racing Suzuki). Those two went through to the main, but factory rider Waters was out due to a crash, as was opening night standout Joel Wightman (Penrite CRF Honda Racing).

SX2 final:
It was a glorious rebound for Blose in the 15-lap SX2 final tonight, winning in style by just over three seconds despite going down with previous championship leader Todd – who took the hole-shot – after the finish-line at the beginning of lap two. Blose was the pace-setter once out front, stretching a lead by strategically using the Shannons Shortcut and never being challenged from there. The incident between Blose and Todd eventually enabled a charging Richardson to go through to second in one of the most important results of the season, taking the championship lead by five points with a single round remaining. It was a disastrous race for Todd as he went down not once, but four times while riding a moderately damaged YZ250F, but ultimately collecting 10 points for 11th. It was an emotion-charged podium result in third for Wilson after leading early on, marking a significant result in his career since returning to Australia, while privateer duo Potter and Stapleton completed the top five.

SX1 final:
Pre-race favourite Anderson dominated the 20-lap SX1 main event to become this year’s AUS-X Open champion in what was another hard-fought affair for position in the 12-rider pack. It was Ferris who led out of the first turn and the opening lap, however Anderson took full advantage of the Shannons Shortcut to seize the lead on lap two. Behind them, Wilson moved into P3 and then bypassed the whoops himself to close in on Ferris, who slid out before the whoop section – and went down again soon afterwards – and that put him out of contention. Out front it was all Anderson though, slicing his way through lapped traffic to maintain an advantage over team-mate Wilson, again delivering a 1-2 for Husqvarna by 7.245s at race’s end. Behind them it was eventually current AUS Supercross points leader Brayton who rounded out the all-international podium in P3, albeit over 30 seconds from Anderson at the front. Reardon was once again top of the Australians in fourth this time, edging ahead of rookie team-mate Crawford in another strong ride – the final rider on the lead lap. Mosig went down in the first turn and could only recover to 10th, one place ahead of Ferris, which now sees Brayton hold an 18-point lead in the series from Reardon, who is a further two markers ahead of Ferris.