Post-race updates from the SX1 and SX2 classes at round four of the 2017 Australian Supercross Championship, direct from Monster Energy AUS-X Open Sydney inside Qudos Bank Arena. 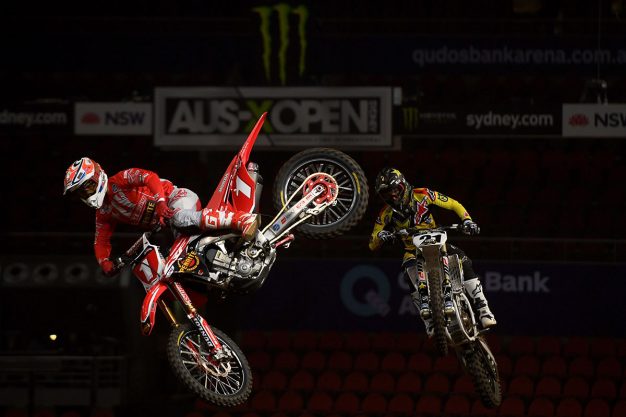 SX2 heat one:
It was DPH Motorsport Yamaha’s Wilson Todd who took the hole-shot in the first eight-lap SX2 heat of the night, maintaining control despite a late charge from defending champion Jackson Richardson (Serco Yamaha) by just over a second. He made his way into second mid-race, but wasn’t able to make a move on Todd, while rookie Cooper Pozniak (Yamalube Yamaha Racing) was third. It’s going to be a frantic night of competition!

SX2 heat two:
Penrite Honda Racing’s Chris Blose was fastest in qualifying and maintained that form in heat two, winning by over six seconds from Jay Wilson (Raceline Pirelli KTM), Dylan Wills (Dyson Motorsport Husqvarna) – riding with a fresh hand injury – while Geran Stapleton (Honda) and newcomer Jy Roberts (Husqvarna), the rookie who led out of the gates. A major incident between Aaron Tanti (Bulk Nutrients WBR Yamaha) and Mitch Evans (Serco Yamaha) currently sees those two being attended to by Racesafe – updates will be posted when they become available.

SX2 semi-final one:
The first SX2 semi-final saw Honda-mounted Taylor Potter work his way by Callum Norton (KTM) in the opening laps, eventually crossing the line ahead of Nick Sutherland (Penrite CRF Honda Racing) and Pozniak. A crash on the final lap demoted Norton down the order, finishing fifth at race’s end. Jesse Madden (KSF Racing Husqvarna) crashed out after getting the hole-shot.

SX2 semi-final two:
The second semi-final was taken out Stapleton, who despite appearing to pass Wills under a yellow following the whoops, he won ahead of Wills and John Prutti (Yamaha) in an uneventful affair of sorts. Only the top three went directly through to the final.

SX1 semi-final one:
It was an entertaining fight for victory in the first SX1 semi-final, as Penrite CRF Honda Racing’s Joel Wightman rode a composed race to lead Long and Mosig across the line. Just 2.2s separated the top five, including Waters and Schmidt.

SX1 semi-final two:
Out of the gates it was Clout who led the way, however he went down entering the tunnel and that saw Ferris take charge at the front. From there he stretched out a 1.4s lead, topping Crawford and Dobson. Hampshire also encountered troubles, dropping him well down the order and ultimately out of the race.

SX2 LCQ:
Track position was key in the SX2 LCQ and it was Roberts who transferred to the final, to be joined by Bailey Malkiewicz (Husqarna) as just the two went through.

SX1 LCQ:
Out front in the SX1 LCQ main event was Waters and that’s where he stayed, trailed across the line by American rising talent Hampshire as those two made the main event later tonight. Behind them was Clout, who traded blows with Schmidt – the latter coming off second best but neither made it through in the end.

SX2 final:
It was supercross revelation Todd who was victorious in night one of AUS-X Open, taking charge of the SX2 championship and making it back-to-back round wins. Todd led from the outset, but was taken by Richardson who took the Shannons Shortcut first, only to retaliate one lap later to reclaim position. That was where he stayed for the remainder of the 15-lap duration, winning by 3.286s ahead of Blose, who used the whoop bypass to make a move on Richardson but wasn’t able to pass Todd. Despite a last lap crash – and another once he cross the finish – Richardson wound up third, comfortably ahead of Wilson and Stapleton, as they were the final riders on the lead lap.

SX1 final:
An intense SX1 class main event saw Wilson return to the top of the podium in a Rockstar Energy Husqvarna 1-2, but he had to work for it throughout the 20-lap final. It was Australian rookie Crawford who took the hole-shot and led the opening five laps after capitalising on the Shannons Shortcut and stretching a lead, before teammate Reardon took charge on the sixth lap. He controlled the race for the next five laps, until Wilson made the pass directly after the whoops and that was where he remained. From behind though, after going down in the first turn, Anderson charged to second after moving by Reardon in the closing laps. Behind the podium trio, Mosig put up a solid fight for fourth, while Ferris edged Crawford for fifth. Next came Long in his first AUS-X Open appearance as the final rider to make the entire 20 laps. It was a difficult final for Brayton, who also went down in the first turn, eventually going a lap down and only crossing the line in P7. Still, in the standings, he leads by 10 points from Ferris, with Reardon a further six in arrears in third.