Racer comments from South Australia's third round of the season.

A selection of riders detail round three of the 2017 Australian Supercross Championship in South Australia. Team and privateer competitors can submit comments to [email protected] by Monday afternoon after events for inclusion in the post-event Quotebook feature. 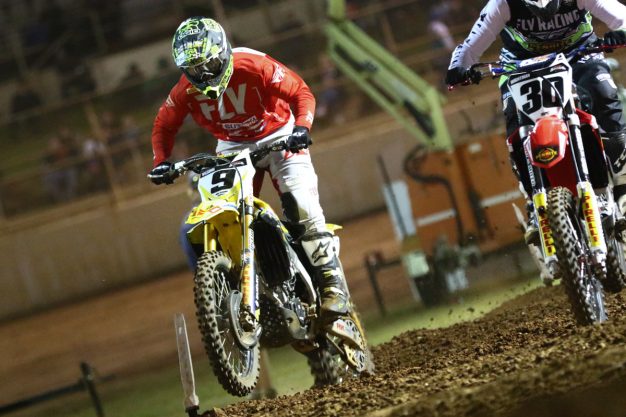 Dylan Long (CDR Yamaha) – Second overall:
It feels awesome to finally get back up on the podium, my first time with CDR Yamaha. Its taken a while to get back to where I need to be but I’m so pumped to finish second tonight and within sight of Justin. I think I saw a pitboard from Brad that said we had five or six laps to go and I had a pretty good gap over third place so I decided to calm down a little, maintain my position and finish in second place. I’m so glad to finally give CDR Yamaha a result they can be proud of. Its been a long season but things have turned around and everyone at CDR Yamaha has had my back and I can’t thank them enough for their support.

Dean Ferris (CDR Yamaha) – Fourth overall:
It’s a disappointing result, that’s for sure. I had a pretty good start and was just behind Luke Clout, who was leading the race, when he went down after the double going into the second corner and I got caught up in that and also crashed.I got up and moving as quick as I could and still had a goal of getting back onto the podium but I could only get to fourth. As you get closer to the front, the riders get harder to pass and on a track like this, you either had to wait for a mistake from them or pull and aggressive move and I had to do a few of them in the later stages of the race. I can’t complain too much if fourth is the worst result I have had in over 12 months, but I’m determined not to make a habit of it. I put in a good couple of weeks with the team since round two and felt much better tonight so we are going to keep pushing for a race win and look forward to the Aus- X open in a couple of weeks’ time.

Nick Schmidt (Wilson Coolair Motul Factory Suzuki) – 10th overall:
The weekend started off really well – I was fast all day and I just made a stupid mistake in the heat race and hurt my knee a bit. It was a massive crash that I had, but I knew that I could ride better than I could walk so in the main I gave it my all. I had a good jump but I got hit by another rider and went down so I had to get back up and I eventually got back to 10th. Although it doesn’t look great on paper, there were a lot of positives to take from the weekend. We certainly have the speed so now it’s about putting it all together. I’ll have a couple of days off to let the body rest and then and come out even stronger in Sydney.

Kade Mosig (DPH Motorsport Yamaha) – Third overall:
I’m so happy to be on the podium! I’ve worked hard, and continue to push myself. I earned this third place.I was pretty consistent in my approach all day, and managed to keep progressing and come the final, got myself into a strong position from the start and rode my own race. I can’t wait to get to Sydney now for the AUS-X and an indoor race track.

Luke Clout (Crankt Protein Honda Racing) – 13th overall:
We qualified fifth in the afternoon session, which was good. I got a good start in the heat and then qualified through to the main in second, so we turned things around a bit at that stage. Everything was positive going into the main and we ripped a really good start actually. Unfortunately I had a really big crash after that. I’m okay and I’m showing some promise. We just have to put it all together. It’ll turn around and I’m looking forward to that. It’s a bit of a shame for me at the moment, but we’ve got the AUS-X Open coming up next and I’m looking forward to that.

Todd Waters (Crankt Protein Honda Racing) – Seventh overall:
I finished second in my heat, which gave us a good gate pick and I got myself in second position in the main. I came into the sand section and just rode it to the ground and crashed. I picked it up in 10th and then only made my way back to seventh. I’m looking forward to AUS-X Open, we’re definitely building, which is good. We’ve just got to keep on pushing and get some good starts – that’s what we need to do.

Justin Brayton (Penrite Honda Racing) – First overall:
I am really happy for the team and our sponsors, it’s been a massive effort and this is reward for their commitment to our program. The Honda has gated well all season and to get another holeshot is testament to the motor in the 2017 CRF450R.

Joel Wightman (Penrite CRF Honda Racing) – 12th overall:
Honestly, it was a frustrating event for me. My heat race went good with no mistakes and I finished fourth, which gave me a decent gate pick for the Final.Then my start in the Final had me in the top group sitting about third into the first corner, but then as we shuffled around through the first rhythm section, a rider in front of me had a decent get-off over a double and I had nowhere to go except into his bike. I went down, got stuck in the back of another bike for a split second, and by the time I pulled my tweaked bike back out and got going, I was basically last. I regathered myself and finished 12th. I was pretty bummed to have my night go that way as I felt like I had a good race in me but sometimes that’s just racing. I’ll put it behind me and now I’m super-excited and looking forward to the next double-header round at AUS-X Open in Sydney in two weeks time. Gavin Faith (Penrite Honda Racing) – Fifth overall:
I gated poorly tonight and it made things really hard on this track as it was slick and very one-lined. I had to come from quite a ways back and I ended up getting tangled up with another rider midway, I really made things hard for myself. I have another two weeks to prepare for the indoors and I am looking forward to racing in Sydney. I am just glad I got through this weekend in one piece and still in the championship points lead

Nick Sutherland (Penrite CRF Honda Racing) – 11th overall:
The whole deal came together really quick, I’ve known Mick and Ian Wightman from the team for a long while, and they put the opportunity out there. Then once I was contacted by team owner Mark Luksich, it was an opportunity way too good to let pass. It’s been a hectic week after racing in Indonesia the weekend before, and I only got to ride the Penrite Honda for the first time on Saturday in Adelaide. But overall the event went well and I came away with a 12th place finish in the SX2 Final, which is okay all things considered. Just my starts hampered me in Adelaide, and with the track being one-lined, it was tough trying to come through. If I had gotten a better start in the Final, I could have run fifth to tenth, which is where I consider I belong. Mick’s given me a spare clutch now, so I’m planning on wearing one out while practising starts over the next two weeks before the next two rounds of the championship at the Aus-X Open in Sydney!

Jay Wilson (Raceline Pirelli KTM) – Eighth overall:
It was a bit of a disappointing weekend to be honest. We had a great lead up, and we had good speed at Virginia, but in the main we just couldn’t make the passes we needed to. I felt really good in my heat race, and knew I had the track all dialled in, but I got caught up in the carnage of the first lap and it was a track where it was very difficult to make passes, so your position in the early stages of the race was really important. I am happy with my riding and I know that if I can make things happen in those first few laps that we will be on the podium – I just need to make sure I’m not leaving my run as late as I am at the moment. I’m one of the fastest guys on the track in those last few laps, but we need to make it happen earlier.

Morgan Fogarty (Raceline Pirelli KTM) – 15th overall:
Round three was a little tough for me and not exactly what I wanted but we’ll just move on to next round. My heat race was good, I ended up getting a decent start and made a few passes and went straight to the main, which was the goal. In the main event I ended up getting a good jump out the gate but got pushed wide and ran off the track, I was running mid pack and came together with another rider and that put me dead last, but I was able to catch a few riders and came home with 15th. We’ll keep working and be ready for Sydney.

Wilson Todd (DPH Motorsport Yamaha) – First overall:
I’ve finally got that race win I’ve been chasing! I felt good today on track and I’m pumped to finally have some things fall my way. I had great starts all day, from my heat and Dash for Cash races to the Final, I was either first or in the lead group and from there, I was confident that I would be able to get in front and stay there. I’m now only two points off Gavin [Faith] in the championship with two rounds to go!

Jackson Richardson (Serco Yamaha) – Second overall:
Second tonight was pretty good and it was one of those nights where you just want to come through unscathed and in good shape and we were able to do that. Wilson rode really well tonight and deserved the race win but for me it was important to keep collecting points and building championship momentum. The track was really hard pack dirt by the end of the night and it was so easy to fall so it was about being smart tonight and just getting the result we needed to stay in the hunt.

Mitch Evans (Serco Yamaha) – Fourth overall:
My first few laps weren’t good and that let me down tonight. I was in fourth and right on the top three when I made that mistake and dropped back. Then I took too long to get around those guys again and give myself any chance of getting on the podium. My last half of the race was pretty good and my fitness is fine so just that race intensity right from the get go will see me with a better finish.