Penrite Honda Racing’s Justin Brayton stormed to yet another convincing main event victory last Saturday night at Virginia’s third round of the Australian Supercross Championship in South Australia, extending his lead in the series to 13 points. MotoOnline.com.au tracked down the defending champion to gather his thoughts on the night. 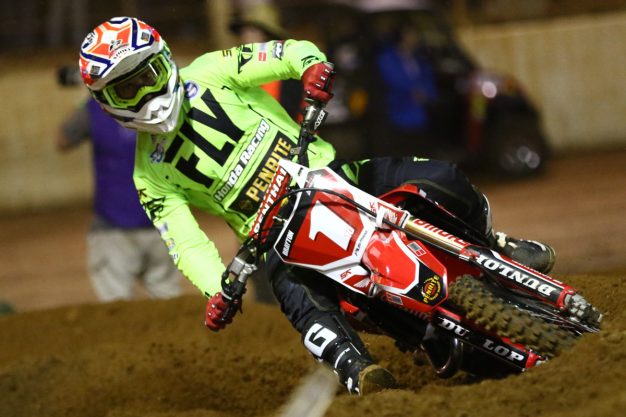 Another great night for you, your third-consecutive main event victory – you must pleased with that result.

Yeah I’m super stoked on that one, showing up here this morning, I knew this was going to be the toughest because the track was so easy – I knew that it wasn’t really going to seperate anybody, and then with how hard-packed it was, that makes it more of an even playing field as the track only allows you to go so fast. There’s kind of a cap on how hard you can push into the corners and that, and then with a wall before the whoops, I felt all my advantages were kind of taken away. I challenged myself to get good starts and put myself in good positions – once I did that in the main event, I just tried to put on consistent laps and didn’t really try do anything too special. I just clicked off 20 solid ones and got another win – I’m definitely stoked on that one.

You spoke of the track, it’s pretty tame in comparison to the previous round and it was quite slick, how did approach those conditions?

It was really tough, for sure. The track was really slick and it had a lot of marbles on top, which made it even more slick and kind of unpredictable. It was tough, and like I said, when I walked the track this morning, I knew I had to make it happen – it was going to be the toughest one of the year. I’m pretty proud to make it happen.

Obviously Sydney is in a couple of weeks, it’s the biggest event of the series and has two rounds in the one weekend. Having three wins already under your belt, does that boost your confidence going into it?

For sure, it definitely gives me some confidence. It’s going to be fun having a couple more guys, last year obviously Reedy and I had some awesome battles – I’m super bummed he’s not going to be there, I was looking forward to banging bars with him a again – he’s always fun to race. I’m excited to race Jason [Anderson] and Dean [Wilson], we’ve raced each other for a long time, so I’m excited to battle those guys and excited to battle the regular guys in the championship. Dylan [Long] rode great tonight, I’m super stoked for Kade Mosig – I’ve actually ridden with him in Melbourne in the past couple of weeks – he’s riding awesome, so I’m stoked he get on the podium. And obviously [Dean] Ferris is still going to be good, so you can’t count any of those guys out. I’m definitely really looking forward to that one, and getting second and third last year – I left there pretty bummed – so it will be nice to try and get a win. Knowing those guys are going to be there, do you change your approach at all or just maintain what you’ve been doing?

I’ll maintain what I’v been doing all season, I obviously want to get good starts and keep doing what I’m doing. I’ve raced those guys for a long time, they’re obviously super fast and talented, so it’s going to add some flavour to the class and I’m excited to get there and do some battling. Just the whole atmosphere of AUS-X, I feel like I’m in my element with the states and all the pyrotechnics and all that stuff, and with that many fans – I’m stoked for it.

You spent the last couple of weeks in Melbourne, is plan to stay here until Sydney or are you going to return to the Sunny Coast?

I’ll be in Victoria until Tuesday, then I’ll be back up on the Sunny Coast for the rest of the season. We’ll fly back to the states the Tuesday after Jimboomba, so we’ll be in Queensland for the next three or four weeks.

Awesome mate, thanks for your time.