Bacchus Marsh’s second round of the Australian Supercross Championship proved to be another successful night for defending champion Justin Brayton, who stormed to a convincing victory in front of the large Victorian crowd. MotoOnline.com.au tracked down the Penrite Honda Racing rider to gather his thoughts on the event post-race. Another extremely great night for you with a win, talk me through how you feel it went.

Yeah, that was awesome really from start to finish. I got an awesome start, I kind of made a mistake through one of the first rhythm lanes and Dean [Ferris] got by me. I knew I had to get him right back, because I felt if I could get out front and get some clear track, I could pull away. So I got right back by and tried not to waste any time in the first five laps – I tried to put in some solid ones. It was mainly just getting solid runs through the whoops – the whoops were the most challenging part of the track, and the rhythm after that where I did the dragons back, triple and then four onto the second table – I knew I had to nail that. I stared to click off some consistent laps, and for the last 10 or so I just managed it and I tried to stay on two wheels.

The track was much larger in comparison to round one, not only in lap times, but also the whoops like you said and the rhythm lanes. Do you think that played into your favour?

Yeah, for sure. Right when I saw the track I figured it would play into my favour, only because it’s the size of an American track and with the whoops being that big, I felt like I could have an advantage there. I can’t take anything away from Dean, he rode really good tonight. The track definitely suited my style and I enjoyed it from the first practice to the last race – it was fun for me all day.

Obviously two wins under your belt now with four more races to go, are eyeing off a perfect season or is that even on your mind?

Not really, we’re only two races in and I just want to keep doing what I’m doing by having fun during the week and riding with my teammate Gavin. Really just enjoying it, enjoying the process and enjoying my time over here and showing up ready to race. If I get the win, awesome, if I don’t, then I’ll get back to work – that’s really it. Last year if a couple of things went my way, maybe I could’ve won a couple more, but that’s racing and that’s the way it goes. I really just want to keep getting solid weeks under my belt, keep getting starts and keep putting myself in good positions, then I think I can keep doing well. 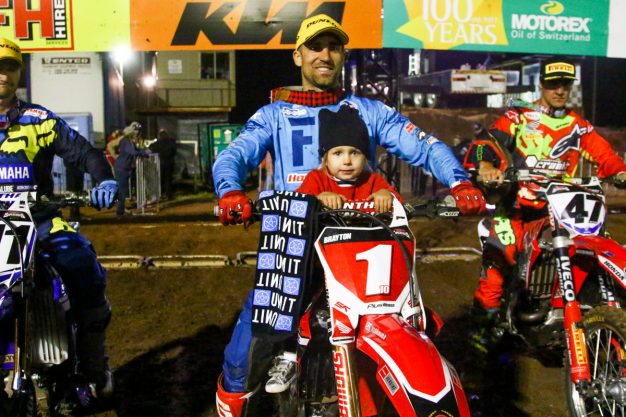 When we spoke at round you mentioned how you’ve changed you’re approach on racing in Australia, how has that been treating you in the past couple of weeks?

Yeah, it’s been good. We had a track built about 15 minutes from where we’re staying. It’s like my program in America, I get to ride in the morning and do my motos, get them done, do some training and enjoy family time in the afternoon. Last year I wasn’t able to do that, I didn’t have my program dialled in, I didn’t know many people over here and didn’t know where the tracks were and how they worked. Now, I’ve met some awesome people who have helped me out to get some tracks going. We’ll be staying in Melbourne for the next couple of weeks, which is cool because it’s by the Honda shop. There’s all kinds of tracks around here, so I’ll be able to keep my normal program. That’s one thing last year that I wasn’t too pumped on, I basically treated it like a holiday the whole time – it really bit me when I went back to the states for American supercross – I just felt I wasn’t as fit as I needed to be starting the series. Once you start like that, you’re kind of the behind the eight ball. Also switching bikes, I rode the 2016 here last year and right when I went home, I got the brand new bike and only had three weeks on it. I’ve had about a year on this motorcycle, so that’s going to help my transition a lot more and is the reason I’m more comfortable over here this year.

I was about to ask if you were going to stay in Melbourne for the next couple of weeks, but you’ve already answered that. Will the time here enable you do further testing being so close to the team’s headquarters?

We do have a little bit of testing, we’ve got a couple of days planned this week. Just with a few odds and ends, nothing too major – we’re not going to change anything drastically because I feel like my bike and everything is working really well at the moment. It’s just nice to be close to the team and the team owner Yarrive, it’s fun to go to the shop and hangout with him. It’s good to be close to the mechanics and be around and show our faces. Gavin will be staying down also, so we’ll get to ride together – really it’s just the same program as on the Sunshine Coast. It’s really fun to mix it up and ride different tracks with different people. It’s going to be a fun couple of weeks.

Yeah awesome, thanks for your time mate. 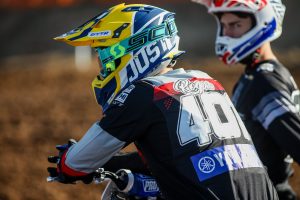 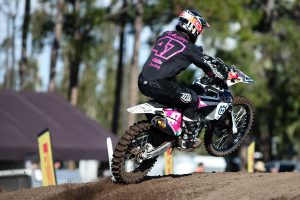