The opening round of the 2017 Australian Supercross Championship at Jimboomba in Queensland marked a brilliant start for reigning champion Justin Brayton, who dominated the night to commence his title defence with a commanding victory. MotoOnline.com.au tracked down the Penrite Honda Racing rider to gather his thoughts on the event. A brilliant night for you in your return to racing in Australia, you must be pleased to be back on top with Penrite Honda Racing.

Yeah, it feels so good to get this one under my belt. Coming into any first round you’re always a little nervous and anxious, and for me to pick up where I left off last year, I couldn’t ask for a better day. The team was awesome, my mechanic Brent had the bike flawless – it was great. I’m much more prepared this year, but it doesn’t mean that I’m going to go out there and win the race, there’s Dean, Dan and several other guys who are riding really good. It’s going to be tough, I’m glad to get this one especially going into a long break. I’m staying here the whole time with my family, so I’ll be able to put in some good training and maybe even a little more testing on the bike. I’m stoked to get that win, it feels really good to get it for Penrite Honda Racing.

It was only a matter of laps before you got into the lead, and once you did, you gapped the guys just behind you. It seemed like from there you just cruised home with it, did it feel like an easy victory?

It’s never easy, especially when the track is like that – it was really, really difficult. I put in five or six really good laps and got a good gap, once I got the gap around 9-10 seconds, and it’s kind of dumb, but I kind of put it on cruise control and I don’t like doing that, although with a track like tonight with how slick it was, I did. I was just seeing where they were on the track and just making sure I was staying the same or pulling a bit each lap. I had some close calls out there, no doubt everyone else did too.

In that main event two of the light towers at the same end of circuit blew out, did that play an affect on your mind or concentration at all?

Not really, it was towards the end of the race – I think I had five laps to go when one of them went out. It was the sweeper before the whoops, so it wasn’t too bad, but you couldn’t go a fast as you would like – nobody could. I think on the last lap, one went out right before the rhythm section – that one was a little bit sketchy. Thankfully it happened with just a lap to go and it was just section before the finish. 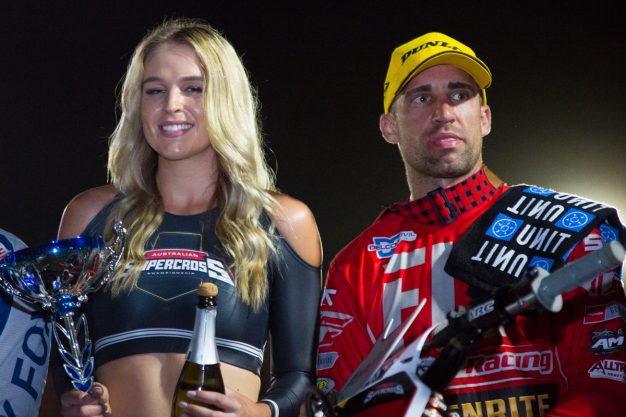 A few weeks between now and Melbourne, with a win under your belt, what’s there to improve on throughout that time?

We just had a track built up by the Sunshine Coast where we are staying, so Gavin, Jesse and I will go to work. The track looks awesome, we’ll ride it for the first time on Monday or Tuesday this week. It’s something I didn’t really do last year, I didn’t keep preparing for the whole season and didn’t ride much during the week. There was really no track and didn’t have the practice bike. This year I’m doing it right, I want to win this championship and I also really want to prepare for the US supercross as well. I want to be training as if I’m really getting after it, training as I would in the states. I’m just going to keep doing my program going, except I’ll have a beautiful scenery staying on the Sunshine Coast.

Just lastly, the team is headed up by Jay Foreman this year, who’s a well respected and highly-regarded team manager in Australia. What’s it been like working under his guidance so far?

It’s been awesome, I’ve heard some great things about Jay. Obviously he’s worked with Chad Reed and some other great racers in the past, and the guy has just been a pleasure to work with – it’s been great. Along with Yarrive the team owner, he’s been nothing but awesome to me. From day one that we talked he’s been great, and I think bringing on Jay adds a whole other level. The team is great, I got to bring my mechanic Brent over again this year, we’ve got a great group of staff and it’s going to be fun. It’s always good to get the first one out of the way, and to get it out of the way with a win is pretty awesome.

Thanks for your time and congratulations on the win mate.