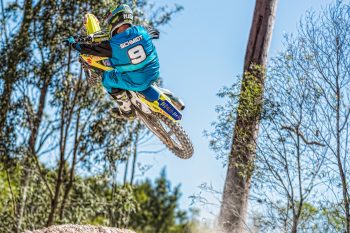 Wilson Coolair Motul Suzuki has signed American Nick Schmidt to join Luke Wilson in the 2017 Australian Supercross Championship, which is scheduled to commence this Saturday at Jimboomba in Queensland.

Schmidt, a regular in the Monster Energy AMA Supercross Championship, completed this years series in 23rd position despite missing a selection of rounds. His best result of 15th came at East Rutherford.

The newly-signed US import plans to carry his momentum from 2017 into the Australian six-round series in an effort to add an SX1 title to his list of accomplishments, which includes a German supercross title.

“Coming from America, for the past three years I’ve got the top privateer award,” said Schmidt upon arrival to Australia late last week. “I just want to keep the ball rolling and the momentum going here down under.”

Schmidt is slated to racer under the number nine aboard Suzuki’s highly-anticipated 2018 RM-Z450, with the model due to go on sale in dealerships this week. The Queensland-based Wilson’s operation has also enlisted the services of renowned suspension technician Charlie Costanzo to aid the team in its supercross endeavours.