Who the experts are tipping to claim the SX1 and SX2 class championships.

For 2017 we’re again seeing a highly-rated field of both domestic and international racers preparing to contest the Australian Supercross Championship in both the SX1 and SX2 classes. We’ve got both past and defending champions in both categories lining up, including a whole bunch of strong contenders who will be chomping at the bit to steal away that coveted number one plate. In this latest edition of The Point, MotoOnline.com.au checks in with various industry personnel – including our crew – and select riders to get their predictions on who will occupy the top three championship spots after six rounds of racing action. SX2 – 1. Gavin Faith 2. Hayden Mellross 3. Jackson Richardson. Faith will probably come through with the goods in the SX2 class. He’s been doing supercross all year and like Brayton, it’s his forte as well. He’s got the experience here and there and he also understands what’s necessary in order to win the championship.

Adam Spence (Foremost Media):
SX1 – 1. Dan Reardon 2. Justin Brayton 3. Dean Ferris. I’m going to peg Reardon as the 2017 Australian Supercross Championship winner. He spent much of this season in the US racing supercross, he looks comfortable aboard the Kawasaki and definitely has the ability to take out the number one plate once again.

SX2 – 1. Hayden Mellross 2. Gavin Faith 3. Jackson Richardson. Mellross showed awesome form during the latter stages of the 2017 US supercross series and he’ll be hungry to lock up this year’s Australian title after seeing it slip away from him at last year’s AUS-X Open event due to a mechanical issue.

Kirk Gibbs (KTM Motocross Racing Team):
SX1 – 1. Justin Brayton 2. Dan Reardon 3. Dean Ferris/Todd Waters. Brayton will be the one and I think he’ll win. He’s so mature and he’s so solid, he races the best in the world and I think he’s got the confidence from last year, so my money is on Brayton.

SX2 – 1. Hayden Mellross 2. Gavin Faith 3. Jackson Richardson. I think Mellross is only getting stronger and he’ll win. I think he should have won it last year and then he obviously had the bike malfunction. I just think he’s solid in supercross and he rides it pretty well, he’s been in America learning from the best guys, so I think he’ll go first.

Ryan Marmont (MXR&D):
SX1 – 1. Dean Ferris 2. Justin Brayton 3. Dan Reardon. Ferris just has the eye of the tiger at the moment and he’s in a happy place. He’s fit, he’s fast, he’s strong and I know supercross is a different discipline, but when you’re at the top of your game, you can adapt to anything I believe.

SX2 – 1. Egan Mastin 2. Hayden Mellross 3. Jackson Richardson. People haven’t really seen Egan ride, but I believe he can win, I think he has the goods to do it. I know what he’s capable of and he’s riding with a lot of strength at the moment, he’s on the 250 four-stroke and he’s gelling with it. New team and new surroundings, but I think he can rise to the occasion. 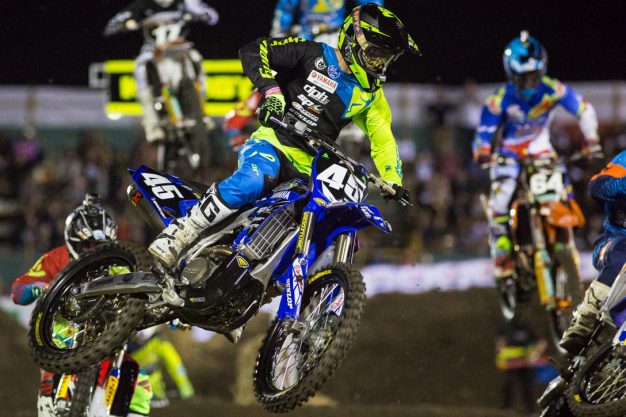 Jeremy Hammer (Foremost Media):
SX1 – 1. Justin Brayton 2. Dean Ferris 3. Todd Waters. You can’t really go past the defending champion. He was extremely dominant in last year’s series and it’s going to be tough for anyone to stop him again this year. Ferris will no doubt be strong with a season of supercross under his belt, but I think he’ll fall just short to the American.

SX2 – 1. Hayden Mellross 2. Jackson Richardson 3. Egan Mastin. It was a heart-breaking end to a fantastic season for Hayden Mellross in 2016 and that’s why I’m tipping him to take out the title. There’s no questioning he’ll be looking to secure the crown, but he’s up against stiff competition such as reigning champ Jackson Richardson and Egan Mastin.

SX2 – 1. Egan Mastin 2. Hayden Mellross 3. Jackson Richardson. I think Mastin has a lot of confidence going at the moment, he has his dream ride and I think he’s just in a good place head wise – I think he’ll do well.

Alex Gobert (Foremost Media):
SX1 – 1. Justin Brayton 2. Dean Ferris 3. Dan Reardon. After winning three of the four regular rounds last year, Brayton is hard to go past this year, although Ferris and Reardon will put up more of a fight throughout the season this time around.

SX2 – 1. Hayden Mellross 2. Jackson Richardson 3. Gavin Faith. This is going to be a genuinely interesting series, as Melross appears to be the favourite, but Richardson and Faith have titles to their credit. This year will be Mellross’ time in my opinion.