The 2012 Australian racing season saw Jay Marmont line up with Carroll Motorsports’ Monster Energy Kawasaki team in what was a shock change for much of the industry. Coming off the back of four-straight MX Nationals premier class titles and one supercross title the year prior with CDR Yamaha, it was an interesting choice by Marmont and all eyes certainly were on him.

Following the recent announcement confirming that multi-time Australian Champion Troy Caroll and his Carroll Motorsports effort will be departing from the paddock following the 2017 supercross series, MotoOnline.com.au decided to take a look back at this championship run as it could well remain the team’s greatest achievement during its time in the sport.

Kicking off their parternship, the motocross season definitely did not go to plan for the four-time defending champion as he sustained a knee injury and claimed just one lone moto victory in Western Australia. It was a contrasting MX Nationals series for the then 29-year-old as he was forced to come to terms that he would be handing over the number one plate to his former CDR Yamaha teammate Josh Coppins.

Following the motocross series, where he finished sixth overall on the MX1 points tally, Marmont was quick to confirm that although it was a tough series, he was ready to defend his title. Knowing the outdoor title had slipped away for the first time in four years, it was all about winning that supercross championship now.

“This series obviously didn’t go to plan for me,” Marmont told MotoOnline.com.au. “I had an injury that forced me to miss a whole round which is unheard of for me. But on the plus side, I’m fit and healthy now, and getting faster and faster on the Kawasaki. I’m heading into the upcoming supercross series very confident and ready to defend my number plate.” 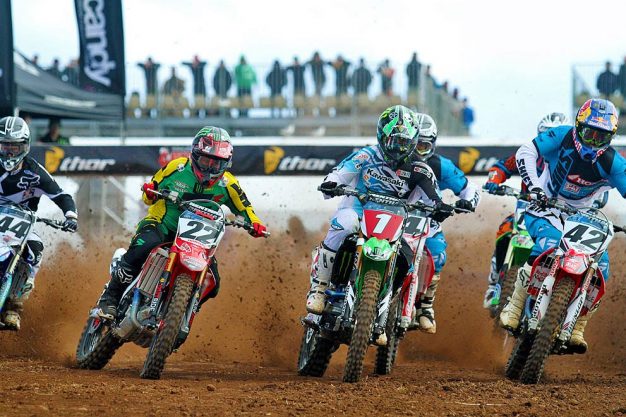 Marmont went ahead kicked off the 2012 Terex Australian Supercross Championship with a victory at Dubbo’s season opener and set the tone for a strong season. It was a complete turnaround for the ultra-talented racer as he returned to the front of the field once again and proved he was serious about capturing that title for the Monster Energy Kawasaki squad.

Although it was a successful season for Marmont, his Dubbo main event win over CDR Yamaha’s Daniel McCoy would serve as his only victory of the season thanks to the arrival of fellow Australian Chad Reed at round two. Reed entered the series with a bang at Phillip Island and from that point on he one each and every main event of the season.

Marmont hung in there though and only finished outside of the runner-up spot once at the muddy Toowoomba event where he took home fourth. Toowoomba also marked the first event that he was again forced to ride through injury due to a practice crash that resulted in a tender thumb.

Although the thumb injury did bother him, it wasn’t enough to stop the defending champion and he entered Newcastle’s season finale with a slim seven-point lead over McCoy. Following a tough motocross season, this supercross title was of the utmost importance and he admitted that the pressure was getting to him leading into that final round.

“Man, before the main event I was in the truck trying to catch some shut-eye and calm the nerves,” Marmont said. “I looked down at my chest and I could literally see my heart thumping against my chest. I think it’s because I wanted it so badly after where I was at the start of the year, to being injured through the motocross.”

Marmont overcame the pressure in Newcastle and with Reed out front, he crossed the line in second position, which was enough to secure the championship by nine points over McCoy. After clinching the title and proving he could indeed win again with a new team and manufacturer, Marmont praised the team for the endless work involved in taking home that number one plate. 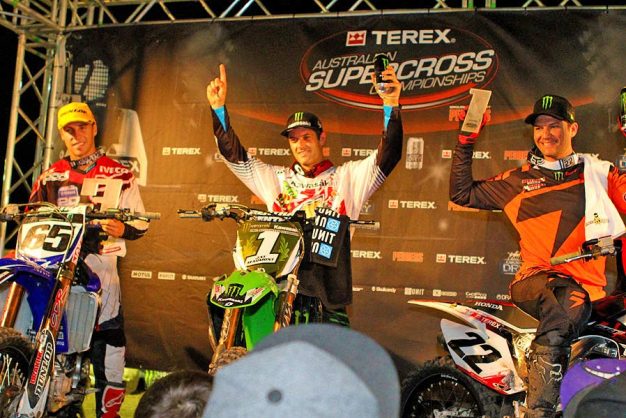 “It was hard, you know,” Marmont admitted. “Everyone questioned my motives leaving Yamaha after being so successful with Dacka [Craig Dack] and the team, and at times I questioned myself when I was injured and things weren’t going right. This team really got behind me and believed in me 100 per cent and they answered everything I asked of them as far as supercross testing goes.

“I’ve gone through so many bikes practicing and so many sets of suspension – a lot more than the average rider would – to find the perfect set-up. There have been countless hours training and testing, so I’m really grateful to win this championship both for myself and the team.”

Marmont’s 2012 Australian Supercross Championship victory would mark his final premier class title as a professional racer. It wasn’t the end of his incredible career, but it was the end of his championship-winning form that he continued to produce for what was an extended period of time. With the Carroll Motorsports outfit announcing their scheduled departure from the sport following the 2017 supercross series, the MEGA Fuels Monster Energy Kawasaki Racing Team will certainly be looking to add another title to the board following their most recent with Marmont in 2012.

Will it be multi-time series winner and team newcomer Dan Reardon who can make that happen? Or will Marmont remain the final racer to claim a professional title for the well-respected Kawasaki-backed outfit? Keep your eyes on the opening 2017 round at Jimboomba in Queensland on 23 September to get a taste of what’s to come this year.