Kyle Webster has become a familiar name on the national motocross and supercross scene over the years, as the Penrite CRF Honda Racing rider has lodged a number of highly-impressive performances against the best riders Australia has to offer.

He’s known as a Western Australian, although Webster was born in South Africa, and it was where he spent much of the early years of life. It would also be the birthplace of his riding career, as he started racing at the youthful age of four after a number of years learning the ropes from his father.

“I got my first bike when I was two and a half years old,” Webster explained to MotoOnline.com.au. “I couldn’t actually ride it for a little while because I was a bit too young, but I finally got started on training wheels. My mum and dad took me to my first race when I was four at a local track in South Africa.”

It was only a matter of years before Webster was introduced to international racing, with a rare opportunity arising to race in the KTM SX Cup that ran alongside the highly-regarded AMA supercross championship. Following several seasons of racing in South Africa, the Webster family soon moved to England, where they would continue to race the local scene, much like they did back in SA. It wasn’t until a series of unfortunate events that would see Webster take an impromptu break from racing. “When we were in South Africa we knew Grant Langston’s uncle quite well, and at the time he was working for the KTM team – he actually managed to get me over to America for the KTM SX Cup in I think 2004 for the San Diego round of supercross. It was like a qualifying round and each winner got to race in Las Vegas at the end of the season.

“I won the race at San Diego which was pretty cool, and yeah, a couple of months later we went to Las Vegas. I can’t fully remember how I went, but I think I got third in one of them. It was definitely a cool experience, I’d love to go back and do it now – I’d probably appreciate it more. I raced there for a couple of years and then we moved over to England, we lived there for four years. I raced majority of the time we were there, but the last year we were there my bikes got stolen twice, so I almost had a full year off racing.”

A move to Perth in Western Australia reignited Webster’s racing career, and again, he’d attack the local scene with much success. Advancing a few years, his home track at Wanneroo would host the 2008 Australian Junior Motocross Championship, where he’d go onto battle long-time rival Jayden Rykers for an 85cc title. Despite having a title to his name, he’d not enter another Australian championship until 2011, placing on the podium in a talent-filled class.

“We then moved to Australia at the end of 2006 I think, and yeah, I started racing pretty much straightway in Perth. I spent majority of my junior career over there, I never really came over east – I just did all the local races there. I raced two junior Aussies – Wanneroo which is my home track was my first – I managed to win that on an 85cc. 2011 was the second one I did at Murray Bridge, I got third overall there to Jordan Smith and Joel Dinsdale – it was pretty cool that I only did two and got on the podium at both of them. As he progressed to the senior ranks, the now 21-year-old would have his first taste of the MX Nationals, entering a handful of rounds that saw him claim fourth at Coolum’s season-finale in the MXD division. The experiences spurred him onto contest the full championship in 2014, which proved to be a costly exercise travelling back and forth from Western Australia. With plenty of ups and downs, Webster completed the year with two podiums to his name, plus a guest factory ride with the formerly named GYTR Yamaha team for the final two stops of the season.

In 2015 he graduated to MX2, making the full-time move to the east coast of Australia while his family remained in Perth. It was a tough year for the rookie as he travelled across the country by himself. Webster admits it was almost a breaking point for him, although it’s made him appreciate the luxuries he now has. His efforts that season saw him picked up Daniel McCoy’s Yamaha-backed SFC Racing outfit for the final rounds of motocross and the entire supercross championship.

“At the very end of the 2013 season my dad and I came over to race Coolum to see what it was like, it actually went really well and I got fourth for the weekend. The following year with the help of Cully’s Yamaha and Wellard I came over and did a full season. It was very up and down, I wasn’t used to how everything worked and how all the tracks formed up – Perth has nothing like it.

“It was cool to experience it all and I did learn a lot. I went straight into MX2 the next year by myself – I was going to all the races by myself and being my own mechanic on the day – that was really hard, that was nearly a breaking point for me. I moved over east that year too, it was pretty tough doing it all on my own – especially at the races. It makes me more thankful now with how I’ve got it.”

Moving forward to 2016, Webster made the move to Penrite CRF Honda Racing after spending many years with Yamaha. It was another year filled with ups and downs, although the talented rider was able to lodge podium finishes in both supercross and motocross. 2016 would also mark a career highlight for the South African-native, as he finished third in the prestigious AUS-X Open in front of thousands of fans and on live television. 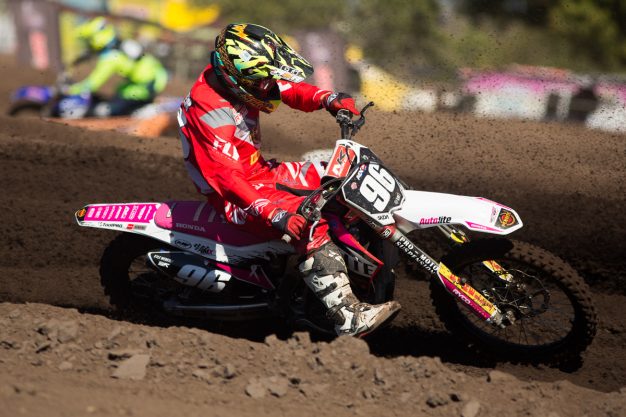 “Getting on the podium at the AUS-X Open was definitely one of the best moments of my racing career, I know it’s only a third, but it was still pretty cool to do it in front of my parents and at the biggest race in the country. It was my second season of supercross, so to get on the podium was a pretty good achievement for me – I’ve never really done much of it before.”

This year has proved to be Webster’s most successful yet – he managed to display his raw talent and potential all year long, lodging a number of respectable finishes amongst a handful of podiums to round out the Motul MX Nationals in fifth place. He’d also take an up opportunity to race the Indonesian round of the MX2 World Championship at the beginning of the year, however chaotic weather marred his wildcard appearance. With the Australian Supercross Championship fast approaching, he’s eager to replicate his form into the series while remaining healthy for the duration.

“I feel I was riding better than what some of my results were, I struggled with starts all year – I tried so many things to fix them. I felt like I was always racing from behind, but I was happy with how I riding and to finish in top five in the standings – it was my goal.

“I want to stay healthy and not get hurt during supercross, that’s something that catches a lot of people out. As long as I stay healthy and consistent, I feel like I’ll definitely be in the top five – I’d be happy with that, and if anything better comes along, that would be a bonus.”

For 2018, Webster will remain with the Penrite CRF Honda Racing outfit as he endeavours to take a another stab at the 250 titles in both motocross and supercross.