A range of questions with the Yamalube Yamaha Racing SX2 recruit.

After being forced out of the 2016 Australian Supercross Championship due to a serious foot injury sustained at Melbourne’s fourth round, Wade Hunter had been absent from the professional racing scene throughout much of the 2017 season. Focusing on completing his carpentry apprenticeship in Queensland and spending minimal time at the track this year, the former front-runner in the quarter-litre category is now preparing to make a return to racing with the Yamalube Yamaha Racing team for this year’s supercross series. In this latest edition of Fast Thoughts, MotoOnline.com.au checks in with the 23-year-old to talk about his choice to return, what he’s been up to during his time away from racing and more. Making your return to the professional racing scene…

I haven’t made it there yet, but I’ve been riding for a couple of months now and I didn’t do too much riding throughout the year. During the last few months I’ve been doing a little but and feeling pretty good – it should be good. I’ve just been working, hanging out with my girlfriend and my dog, doing just normal stuff. Yamaha had offered me a deal last year to race supercross this year because they knew that I wasn’t really interested in racing motocross. They gave me a 450 to ride throughout the year, but my foot injury actually ended up being way worse than I expected and it took me longer to walk than I expected. I got back and started doing a little bit of riding, but then I got real sick and I couldn’t shake it for about six weeks. After that I had no motivation and I didn’t touch a bike for about three months. I basically rode my bike once in three months and then jumped onto the bike for supercross, which was pretty sketchy (laughs).

They already have Cody [Dyce] and Cooper [Pozniak], so they don’t really need me and they would have been fine without me. I was in the same kind of deal, I’m happy, I like my job and what I’ve been doing, so unless everything was going to be easy, I wasn’t that bothered if it didn’t happen. I went back-and-forth with [Scott] Bishop during the year and I had to see if my boss would let me drop back to three days a week and that kind of thing. If my boss said I couldn’t do it, I definitely wasn’t going to quit my job. So yeah, I wasn’t going to do it unless it happened easily, which it did. I’ve worked with Wardy [Mike Ward] for years now and I’ve known Bish for a long time now too, so they’ve made it pretty easy on me. The first couple days at the track were pretty sketchy and I was thinking that maybe I shouldn’t do it, but then it just started to click and I felt like I had been riding all year. 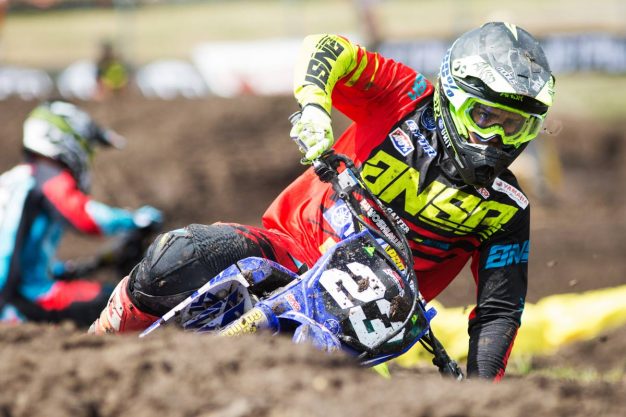 It’s good because I know how scary supercross is the first time you do it – you scare yourself out of everything. I actually rode with Coop for a couple of weeks when he stayed up and he was actually riding really well when he left. I only did a few days with Cody, but I think it’s definitely helpful for them to have me there. When the track’s fresh they’ll just watch me jump everything for the first time and that makes it a bit easier on them.

I don’t really know, I haven’t raced in a long time. I’m riding pretty well, but obviously it’s different when you race – I literally raced a club day this year and that was it. Obviously I want to win or I wouldn’t do it, I don’t really get anything out of going and racing, I’ll just go and throw some whips at the local track. So I wouldn’t be going unless I thought I was good enough to win. I could rock up and have a terrible time at the first round or I could have an awesome round and win it, we’ll just have to wait and see. Last year’s top guys that I raced will all be there and it was maybe three or four of us that were a bit quicker than the rest. So maybe there will be a few other guys this year but I don’t really care, I just want to go there and ride my bike. I know if I ride the way I ride at the practice track, I’ll be sweet.

Your future as a professional racer…

I just enjoy supercross and I can do supercross with working. I’ve only been riding two times a week, but I can get away with that. My boss let me drop back to three times a week for around three or four months, which is pretty nice of him. But as soon as supercross finishes, I’ll go back to full-time work and just see how we go. Maybe we’ll do supercross next year if I do any good, but that’ll probably be it.