Newly-crowned MX2 champion on his weekend at Coolum.

Coolum’s final round of the Motul MX Nationals proved to be a controversial one for Davey Motorsports KTM’S Egan Mastin, but he rose through the drama to be crowned the 2017 MX2 champion. After being penalised 25 positions on his qualifying score from a contentious incident with Wilson Todd (DPH Motorsport Yamaha) in Saturday’s practice, Mastin put together two thrilling moto victories that ultimately awarded him the top spot. MotoOnline.com.au tracked down the newly-crowned champ to discuss his weekend in Queensland. 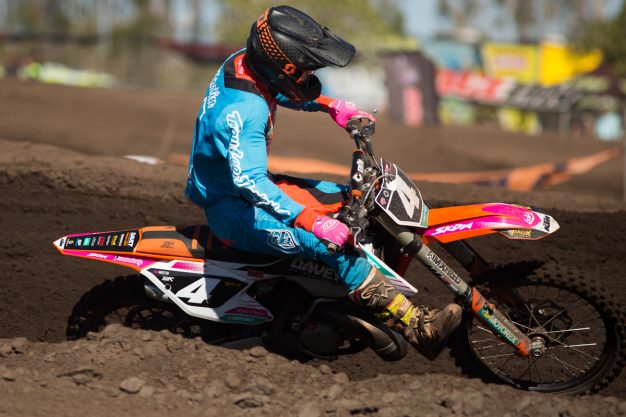 Egan Mastin, 1-1 today and also the MX2 champion. Congratulations mate, talk me through the day and the emotions you experienced.

It was an awesome day, it started off a bit rough with all that stuff that happened yesterday – that call was definitely wrong. We just had to look past it and look forward. I got off to a good start in the first moto, I was about fifth or so and worked my way into the lead. I had a comfortable lead and got that moto one win, I kept that momentum going into the last moto and me and Wilson were 1-2, so right off the start I was like yeah, she’s going to be on here [laughs]. We were moving and going so fast, unfortunately he ended up going down, but that’s racing. I’ve had a lot of my own ups and downs this year and a lot of bad luck compared to a lot of them, so to come back from 35 points down and win the last seven motos in a row is just awesome. We had the bike ticking and working towards the end of the year, the whole team worked really hard and obviously it showed. I didn’t want to think about the championship too much, I just wanted to go out there and get those moto wins. To finally get it over the line and get that number one, there’s just no better feeling.

Like you said, there was a fair bit of stuff going on leading into today. From the incident yesterday, you were being investigated overnight and you didn’t really know what was going to happen, what was your mindset throughout that period and even this morning when you got handed the penalty?

Just from the very start of it, it was very wrong. I would never go out there to hurt anybody, I’ve always had respect for Wilson, and also, I wouldn’t put myself in danger at the same time being in the championship – that just tells you right there. There was something where people were saying there was witnesses or no one had seen it – he’s just going off what people heard. It was definitely a very unfair call, but you know, I just had to not think about it. We’ve had a few things thrown our way with them this year – we’ve had some things that were uncalled for – but we just stayed strong. To get that number one plate, it makes it feel so much better when everything is thrown at you.

In that second moto, Wilson got out front for the first half and you guys had an incredible pace out there – I think you were three seconds quicker than the rest of the field, and almost a second quicker than Wilson – did you feel on the edge in that last outing as you laid it all on the line?

The times show we were flying out there, we got to the halfway mark and I knew in the last 10 minutes I was going to drop the hammer even harder to try and get that moto win. We had a pretty crazy pace, but to get over the line first, there was no better feeling. You’ve spent a couple of seasons doing the amateur scene in America, what were your expectations coming back here to race in Australia?

I was expecting myself to come straight back here and go for the championship and moto wins. I left a champion the last time I was here at Coolum, and you know, I kind of got forgotten about and when I came back, there wasn’t even going to be a deal on the table for me. That was hard to cop because I left a champion and it wasn’t like I was going to come back slower, we almost had to go off our own back where Dad and I would privateer it. We just kept working hard and it all paid off.

As you just said, there was nothing on the table. It seems like quite a unique effort with your dad, Ryan Marmont and the Davey Motorsports KTM outfit, and it all really worked out well in the end.

When I got some good results at the start of the year people actually realised I had potential, and yeah, Ryan Marmont came on board and he has been a massive mentor for me this year. We work awesome together and having him by my side all year, I couldn’t thank him enough. He has taught me so much, and he’s helped make my weakness’ my strong points. I obviously showed that in the last half of the year, we really worked hard and it’s a real team effort, I can’t thank those guys enough.

Moving forward, are your plans to race supercross?

Yeah, at this stage the plan is to race supercross. I’m not too sure if I’ll be on a two-stroke or four-stroke – I’m still trying to work that out. I’ll definitely be doing supercross this year.