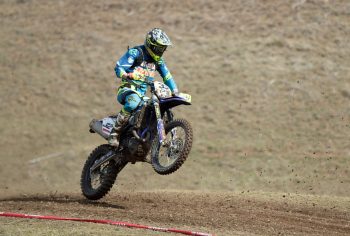 The Motul Pirelli Sherco Off-Road Team put in a stellar performance at the final two rounds of the 2017 Australian Off-Road Champion over the weekend. Held in freezing temperatures in the hills around Omeo, Victoria, the Championship concluded with a cross country race on Saturday and enduro sprint on Sunday.

Despite missing Kate Norman due to illness, the Motul Pirelli Team was intent on seeing out the Championship with all guns blazing. Bolstering the Team stocks in Norman’s absence was NSW rider Ben Kearns who is back in Australia during a break from World EnduroGP Championship racing. Kearns making a healthy addition to the Team with a solid third place in the EJ Class for riders under-19 at Saturday’s cross country round on board a Sherco 300 SEF-R.

Leading the Sherco charge in the Pro ranks was Andy Wilksch who was on fire aboard the Sherco 450 SEF-R during Saturday’s cross country crossing the line in 7th place outright and third in the E2 class. Justin Carafa was back on board a 300 SEF-R and stormed home to fourth place in the E2 Cass at tenth outright.

Team leader and newly-crowned 2017 Master’s Class Champion, Derek Grundy continued his impressive season by storming to victory on Saturday and Sunday. The 52 year-old Tasmanian falling short of the perfect season by just one place when he finished second at round six in Queensland.

Sunday’s sprint round was held in bitterly cold conditions yet Wilksch carded fourth place in E2 on the 450 SEF-R and tenth outright. Kearns was also fourth in the EJ class while Carafa did not compete after re-injuring a thumb during Saturday’s race.

“It was a great end to the Championship for the Team,” said Team manager Dave Suter. “Derek was leading by example and although we missed having Kate with us this weekend we had such a good time racing. Justin’s 4th place in class Saturday was commendable having had very little bike time this year. Even with a crash and injuring his hand again he towelled up some fast boys and was rewarded with a solid result. Andy proved he’s giving the front runners plenty to think about and he’s riding that 450 so well and finished the Championship in 5th place, even after missing two rounds with injury. I’m already excited about what we’ll achieve together in 2018. Andy Wilksch is going places. Having Ben Kearns ride with us for the weekend was great. He has a great style and was riding well so it was great to see him get a podium.”

Suter’s enthusiasm for the Motul Pirelli Sherco Team could hardly be contained when put into perspective.

“Our Team is excellent,” continued Suter. “We all have day jobs. Andy is a builder, Justin is a concretor, Kate is a vet and Derek works for Sherco. These part-time riders are sticking it to the professional guys and we love that. We come together on race day and work together to get results. It’s a really cool thing we have going with a great bunch of people. We’re competitive and we plan on making our Team stronger in 2018. We’ve got some plans we’re working on now which will put our Team in an extremely attractive position.”

For more information on Sherco Australia, visit www.sherco.com.au or to follow the progress of the DSR Motul Pirelli Sherco Off-Road Team, visit www.facebook.com/shercomotorcyclesaustralia