Penultimate round at Toowoomba set for this Sunday 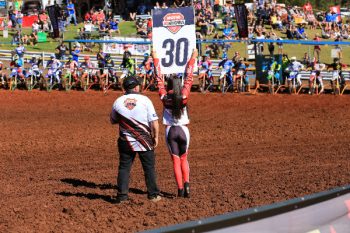 The heavy hitters in the Motul MX2 category and the Thor MX1 class are gearing up for another huge weekend of racing with the penultimate round of the Motul MX Nationals set to take place at Toowoomba in Queensland this Sunday August 13.

So far this season the Motul MX Nationals has stormed into eight Australian towns, and provided entertainment for thousands of spectators, and this Sunday it will be Toowoomba’s turn to welcome the action.

MX Nationals Series Promoter Kevin Williams says this weekend’s event in Toowoomba is one of the most crucial on the calendar and that spectators may witness a champion being crowned on Sunday.

“This Sunday we head to Toowoomba and without a doubt our ninth round will produce some of the best racing of the season,” Williams shared.

“The MX2 class has just 14 points separating the leader from third place in the championship, and in the MX1 category, Dean Ferris, our defending champ mathematically speaking has the opportunity to wrap up the title at Toowoomba which hasn’t happened for a number of years.

“That means spectators who come out this Sunday could have the rare chance to see this year’s Thor MX1 champion crowned, which is the most special moment of the season.”

Key to the weekend’s event will also be the world class venue in which it is held in, Echo Valley Raceway. Williams has shared that after the club took out ‘Round of the Year’ in 2016, that he’s anticipating an epic track for riders this Sunday.

“In 2016, Toowoomba’s round of the championship was a clear standout – the club prepared the track to a standard that couldn’t be matched and as a result they were awarded with the ‘Round of the Year’,” Williams explained.

“The venue is special because it’s one of the few tracks left in Australia that’s a real deal motocross track. Echo Valley is as picturesque as they come with steep hills, huge drops and jumps, making those who take out a round there without a doubt the best riders in the country.

“We have already received word that the club has been busy preparing the venue for our arrival, and we’re sure that after our last seven outings that Toowoomba is going to give our other events so far this year a run for their money – we are very excited for Round 9 to say the least.”

Round 9 of the 2017 Motul MX Nationals is set to take place at Echo Valley Raceway in Toowoomba this Sunday August 13.