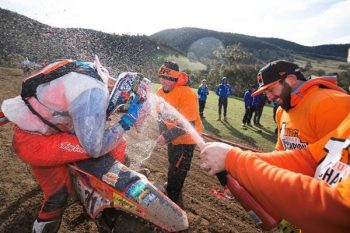 The KTM Enduro Racing Team’s Daniel Milner has crowned himself the brand-new Australian Off Road Champion for 2017, in what has been a perfect weekend for the team at the final stop of the series at Omeo, in Victoria.

Milner and team mate Lyndon Snodgrass went 1-2 on both days, and in outright classification, as KTM 450 EXC-mounted Milner became the first rider in the history of the series to keep a perfect record of round wins across an entire AORC season.

The Victorian secured the championship by winning yesterday’s cross-country round from Snodgrass and Lachy Stanford, but it was business as usual today as he won all five of today’s sprint rounds to take round honours from Snodgrass and Josh Green.

Today however, it was the turn of teenager Lyndon Snodgrass to shine, as the E3 championship went right down to the wire. Snodgrass had needed to defeat championship leader Lachy Stanford on both days in order to win the title, and he did exactly that, taking his KTM 300 EXC to double class victory and tying for points, which gave him the crown on a countback.

It’s the second time in as many years that KTM Off-Road Team riders have finished 1-2 in Australia’s premier off-road championship, with Daniel Sanders and Tye Simmonds accomplishing the feat in 2016.

Glenn Kearney – KTM Enduro Racing Team Manager: “Unreal. It doesn’t get much better than a perfect weekend. The boys went one-two on both days, and Daniel completed a perfect championship – he didn’t lose a round all year – which has never happened before. He wasn’t far off winning every test of the year, actually. Total domination.  Lyndon had to win both days in the class to win E3 over Lachy after they’ve battled all year. They actually had the exact same amount of firsts and seconds, so it came down to the higher last round result – which went Lyndon’s way. He also jumped over Green and Lachy in the outright. I’m so impressed with his maturity for his age, just his confidence and his decision-making. We’ve helped him along the way as much as we could, but the pressure was on for this weekend, for both he and Lachy, and he showed his nerves of steel. I’m stoked for him and the whole team.  All the boys are happy to put in the work, because we know that the riders are putting in the work as well.  Daniel is very methodical with the way he goes about things. He’s been around a while now and his race craft is quite good – he pushes when he needs to and he plays it safe most of the time. He’s just got that bit more speed than everybody else and he can control the races, really.  For a change of pace, next weekend both Daniel and Lyndon are going up to ride the MX Nationals in Toowoomba, which will give them a bit of practice for the A4DE final motocross before they head over to the ISDE.”

Daniel Milner: “I don’t think it’s sunk in yet. I was pretty nervous this week – I don’t know why, but as soon as I got the title yesterday it was a big monkey off the back, that’s for sure. Then to be able to win today and do the perfect season, which no-one’s ever done, that’s put a big smile on my face. I think tonight over a couple of beers it will all sink in.  I’m a racer and I always want to win, so today I just went out there and did what I normally do, just tried to put together smooth and consistent laps – I wasn’t going to do anything stupid to put myself at risk. The tracks here at Omeo were unreal. I don’t think I’ve ever seen a track as nicely set up as this was. It had a bit of everything and the club put a lot of time and effort in and did an awesome job.  Next weekend I’m going up to Toowoomba to race some motocross with the big boys and just have some fun. Watching Ferris and Gibbsy will be interesting too! Then after that I’ll fly out to the 6-day. Twice I’ve come second there, so I’m pretty interested in winning it overall. It’ll be difficult, but I’ll do what I can.”

Lyndon Snodgrass: “It’s been a good year battling, but to get the win’s just been awesome. I knew Lachy was going to be tough competition, and to come out on top in that battle is amazing. I was confident coming here that the track was going to be a lot of fun and I just kept on practicing and it all came together.  This year I think has been about hard work, a lot of practice, and definitely working with Milner has been helping as well. He’s been showing me a few things so it’s good to have him help me out and have KTM 1-2 in the outright. Pretty cool. Omeo was an awesome place for the event, and the KTM 300 EXC was just a heap of fun on these tracks.”