Checking in with the newly-crowned AORC champion, presented by Maxima Racing Oils.

Returning to the Australian Off-Road Championship for 2017, Daniel Milner was sporting an all-new look as part of the KTM Enduro Racing Team and he was definitely on the radar as a serious title contender. After familiarising himself with his new team and equipment, the former GNCC (Grand National Cross Country) racer went on to become the first rider to win each and every round of the Australian series along with claiming the overall Outright and E2 titles in dominant fashion. MotoOnline.com.au caught up with the 26-year-old today to talk about his impressive 2017 season, his future plans and an upcoming one-off MX Nationals appearance! 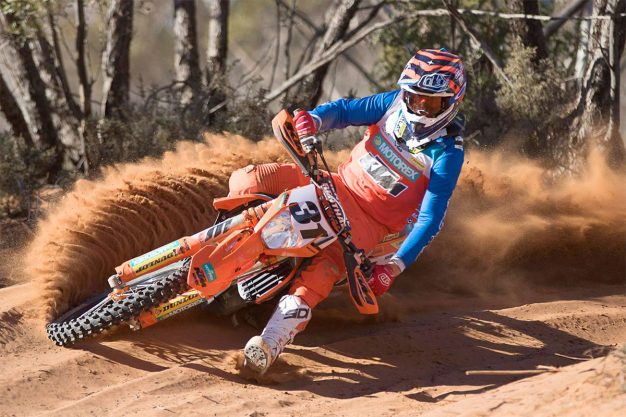 You’ve just secured the 2017 Australian Off-Road Championship title on return with the KTM Enduro Racing Team, it must be an amazing feeling to do that for both yourself and the entire KTM team?

It’s been a good year, it’s my first year back in Australia for a couple of years now, so to be able to come home and be able to win like I did, I’m really excited and stoked to be able to do it. Myself and the team, we worked hard together in the off-season and during the season, so it’s awesome to finally reward them with something. They’re away from their families a lot through the year and to be able to come home with a win has made them a lot happier and especially KTM. It’s my first year with them so Jeff [Leisk] is over the moon and I don’t know how many years in a row now that they’ve won the Outright title, so I think they’re pretty stoked that’s for sure – especially with us going 1-2 for the championship.

When we spoke before the season began, did you think we would be talking again now about not only winning the title, but also becoming the first rider to sweep an AORC season?

It definitely wasn’t, I never had anything in my head about sweeping the whole series. I think it was maybe the fourth round in and I had won everything so far, [Garry] Blizzard told me to go for the clean sweep and that nobody had done it before. I guess that fired me up a little bit more to push harder and make sure that I won every round. So we did what we needed to do and the team supported me along the way and I ended up getting every round win. It was a massive surprise for me and I was over the moon to be able to do it finishing off on the Sunday.

It was obviously a big move to KTM this year for you and it has clearly paid off. How was it working with the KTM Enduro Racing Team with Glenn Kearney in the management role heading up the operation for 2017?

Yeah it was obviously a big jump for me after being on Japanese bikes my whole career and I was a bit worried when I did the deal. But at the time I knew that I had the right backing and the right team behind me to do what I needed to do. I jumped on the bike, did a bit of testing and as soon as we got the feel of the bike, I just felt like I was at home pretty much straight away. To be able to work with GK [Glenn Kearney] was probably the coolest thing. When he called me up and said that he was running the off-road team – that put a smile on my face and definitely lead me toward that side of things. Just the work and the effort that Mick [Carusi] my mechanic puts in and all of the boys on race day, it’s been really cool this year. We’ve got a good bond and it was always just fun going away on weekends with the guys, it just made it a fun year and when you’re having fun you get good results – this has definitely shown with myself and Lyndon. 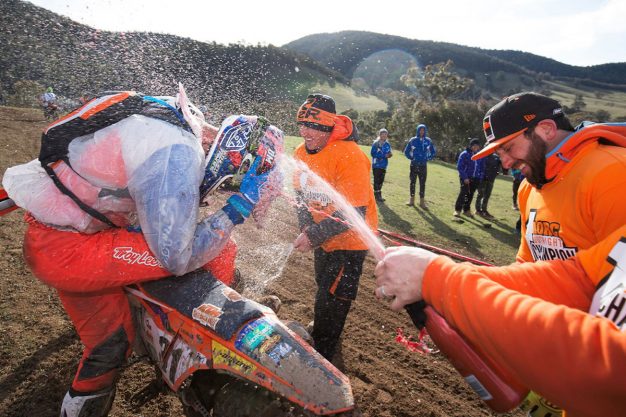 Returning back to the AORC series after spending two years racing in the US and winning in dominant fashion, do you now feel like you’re settled here in Australia or is the goal still to race again overseas in the near future?

To be honest, right now I’m just loving being home with the family and with the team. But I definitely want to go overseas again, I’d like to win a world title in Europe, but obviously things are pretty tough over there right now. So that’s a bit of a struggle when it comes to that side of things, but if I got an opportunity to race GNCC on a KTM I’d probably take that also. But overall our series over here is really good and it seems to be getting better. This year the conditions of the tracks were pretty much perfect every round, I think we had one dusty round and we didn’t even have a mud round this year. So it has definitely been awesome conditions all year round here, so I can’t complain with that setup. I’m definitely looking forward to the future, especially working with these guys, everything so far is going well, so hopefully we can keep that ball rolling and keep going into the future.

Finally, we’re hearing that both yourself and Lyndon Snodgrass are racing the Toowoomba MX Nationals round this weekend, can you tell us a bit about that?

We’re actually just out here now at Appin testing with [Danny] Apro, the suspension guy and Jay [Marmont] is out here with my mechanic Mick. So we’re just doing a bit of testing now with the bike and getting a good feel for it. The only reason we’re going there is just to have fun and we’ve got the A4DE (Australian 4 Day Enduro) final moto at that track. So I’d like to get there and get a feel for the track and also catch up with some moto guys, I haven’t seen them for a while now, so I’m looking forward to heading up there and catching up with a lot of the moto guys and then going out and having a bit of fun on the bike. Lyndon has just picked up a 250F, so he’ll be in MX2 and I’ll be racing MX1, we’ve been battling each other all year so we probably don’t want to battle each other at the motocross track (laughs). It should be good fun out there and as I said, we’re out here at Appin right now and I’m loving this bike, it’s pretty cool so I think it’s going to be a fun time.