Post-race updates from the MX1 and MX2 classes at round eight of the 2017 Motul MX Nationals, direct from Port Macquarie in New South Wales. 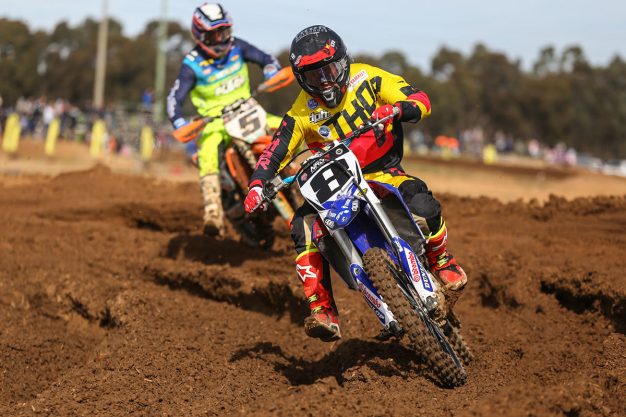 Motul MX2 moto one:
The opening MX2 moto of the round saw Egan Mastin (Davey Motorsports KTM) make his way through to victory, taking charge from early leader Wilson Todd (DPH Motorsport Yamaha) on lap nine and riding away to a 8.969s advantage from there. Todd comfortably held onto second, keeping pole-setter Kyle Webster (Penrite CRF Honda Racing) at bay, with Mitch Evans (Serco Yamaha) and Hamish Harwood (Davey Motorsports KTM) completing the top five. Sixth was Raceline Pirelli KTM’s Jayden Rykers, with positions seven through 10 being held by Dylan Wills (KSF Racing Husqvarna), Richie Evans (Yamaha), Tomas Ravenhorst (Yamaha) and Jay Wilson (Raceline Pirelli KTM), who went down while in P2 on the opening lap and had to come back from 17th at the end of lap one.

Motul MX2 moto two:
Capping off a perfect weekend second time out was Mastin, getting the hole-shot and then controlling the moto from there. Behind him, YZ250F-mounted duo Todd and Evans surged forward in the closing laps, but it was a 1.510s buffer as he crossed the line. A distant fourth was Harwood in another strong showing from the Kiwi, getting the better of Rykers for position, while Webster recovered from a couple of errors for P6. Seventh was Richie Evans, beating Wills and Wilson after both crashed during the moto, with Connor Tierney (Team WBR Bulk Nutrients Yamaha) 10th. Overall Mastin, Todd and Evans were on the podium, while in the championship Todd now leads by 13 from Mastin, with Evans one more back in third.

Thor MX1 moto two:
The race was almost over before it even began for some in moto two, as the likes of Mosig, Gibbs and Crawford all went down in the opening section of turns. Out front it was ever-impressive rookie Clout who led the way, until Ferris struck and took charge at the head of the pack. The runaway points leader went on to win by 2.085s from Waters and Metcalfe, who put on a show for the runner-up place until the latter made a late mistake, while Clout eventually crossed the line in P4. Fifth was a strong way to rebound for Gibbs, although still disappointing, with Styke, Dylan Long (CDR Yamaha), Crawford, Peters and Mosig completing the top 10. On the podium it was a perfect Ferris who stood in the middle, joined by Honda teammates Waters and Clout. In terms of the championship it’s Ferris who leads by 75 over Gibbs, with Mosig a further 51 in arrears with two rounds remaining.