Multi-time Australian champion Dan Reardon is fresh off announcing a new deal to contest the 2017 Australian Supercross Championship with the Troy Carroll-operated MEGA Bulk Fuels Monster Energy Kawasaki outfit. MotoOnline.com.au recently tracked down the Queenslander to discuss his new team and gear deal for the remainder of the year. The announcement came through today that you’ve signed with MEGA Bulk Fuels Monster Energy Kawasaki for the 2017 Australian Supercross Championship, you must be pleased to lock in a deal nice and early.

It’s good to be able to share it with people, this deal has been done for a little bit of time now – we just had to be quiet and not say anything. It was the perfect time for me because I’m in my off-season being supercross-only, so my seasons are a little bit different. I’m just happy to share it with everyone and it’s something I’ve been excited about over the last few months. I’m looking forward to spending some good time on the bike and with the team.

How did the deal initially come about?

As with every year, you can call it the silly season or whatever people like to call it, you talk to people, teams, and everyone like that – Australia has a small industry, so everyone knows everyone anyway. I’ve known Troy [Carroll] for quite a long time, we used race each other and he lives really close to me. I’ve spoken to him over the last few years, and at first it wasn’t something we could put together going back a couple of years, but we finally came to mutual terms and thought we could really make this work.

You were with Kawasaki a number of years ago where you experienced a lot of success, is it a special feeling being back with the brand?

Yeah, it is. I didn’t think too much at first, but over the last week – and even just riding the bike – it’s something. I had some great success with Kawasaki back in the day, I was on them for a long, long time – it’s pretty much the bike that got me to a certain point in my career, and then I ended up moving to America in 2007. I won four championships with them prior to that, and yeah, it’s a company I’ve had some great success with and it feels nice to be back and a part of it again. The bike feels awesome, it’s really good.

I was just about to ask about the bike, what’s the initial feeling on it?

I’ve only had a day on it, but it was better than what I thought it was going to be – I didn’t think the bike was going to be bad by any means, but it was just better – I’m actually quite surprised. It makes good power in comparison to what I had been riding – I was expecting it to be down a little bit, but it wasn’t. The bike just feels light and nimble, on the scales it’s probably the same weight, I don’t know, but it just feels light. I gelled with the bike quite quickly, cosmetically it’s different – it’s a lot narrower and bits like that. I was really happy with how the first day went, I was really comfortable and adapted to it a lot quicker than what I thought I would. 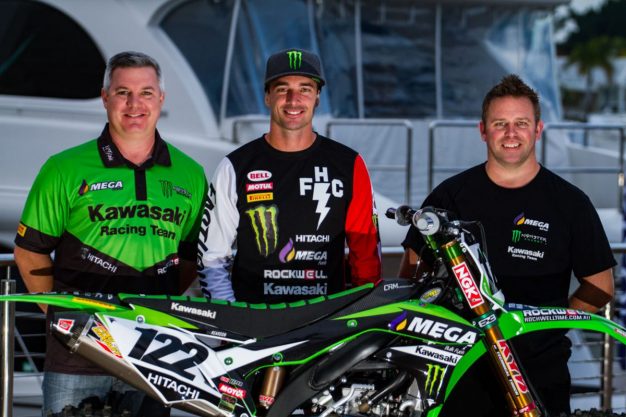 The team’s structure allows riders to source their own gear deals, you’re obviously fitted in Fasthouse, which seems pretty unique.

Yeah, that’s something I’ve been trying to push for years in Australia, pretty much since I came back, just because I think if you’re a professional in our sport and you’re a top 450 guy, you should be able to have the flexibility to go after and be a part of companies or brands that you want – a company that you gel with and are on the same page in terms of content creation or whatever it may be. Even when I say that if you’re a top 450 guy, I think if there’s an up and coming kid who’s 16 or 17 years old, if a brand can hold onto that for as long as possible, or hang onto him for his entire career, I think it just looks better on both parties as well. Like you said, I have a lot flexibility with the team for things like that. Fasthouse is a brand that’s a little bit against the grain, it’s fairly new and I just like everything they do: The content they create, what they stand for is just about guys enjoying time on dirtbikes. It just felt like the right move.

Definitely, when you mentioned their content creation, they’re obviously really savvy with social media, as with yourself, so it really seems like a perfect fit.

It’s good, I’ve followed the brand for quite some time and it just felt like a good fit. I’m excited too, we’ve got some custom stuff coming and the brand is onboard 100 percent. They’re all about it, we’ve got some really cool content and video stuff that we’re going to produce over the next months. I’m just excited about the whole deal.

Yeah awesome, thanks for your time mate and I’m excited to see you out there.