It’s a rare opportunity to be able to ride a fully works race bike, but that’s exactly what we were able to do this month as Suzuki Australia invited MotoOnline.com.au to sample to 2018 specification RM-Z450WS in Japan.

The land of the rising sun, what a place it is. From the time we touched down in Tokyo we were straight into embracing the local culture with a trip to the fish markets around the corner from where we were staying. As we hopped out of the taxi, we walked straight up to a stand-up sushi bar. In Japan sushi is nothing like Australia and being a pretty comfortable parma and chips kind of guy, I soon realised it was going to be a very adventurous week.

So as you can imagine, I indulged every part and type of fish you can think of which were all mostly raw, from fish eggs to squid, chicken hearts, complete tempura fish, liver, offal – you name it and it was on the table. Whilst I couldn’t bring myself to stomach a few things, I gave most a go and to my surprise the majority of it was quite nice. But while the culture was one aspect we experienced alongside a host of US representatives – including Ricky Carmichael – as well, it was the new bike that had us most excited. 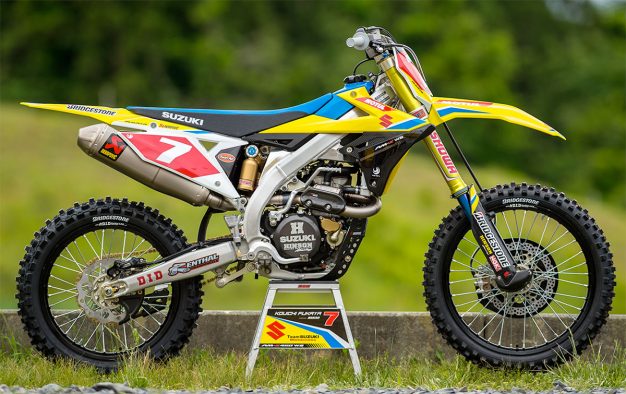 After spending the day exploring Tokyo we were up early the next morning waiting to board the bullet train, which was a cool experience in itself – reaching cruising speeds of 280 km/h was a far better way to kick-start the day rather than the cold iced coffee I had bought from the mini-mart before hand. As we departed from the train we all piled into a bus and we were off to check out some racing at round four of the Japanese national championships held at the Sugo Sportsland circuit, nestled in amongst the green mountain surroundings in Murata, Shibata District, Miyagi.

As we arrived at the event we were met with our media passes and then driven straight the factory Suzuki pit area, where we would base ourselves from for the remainder of the day. Seeing the 2018 RM-Z450WS in the flesh up close and personal really makes you appreciate the amount of time and effort that had gone into producing such a quality motorcycle. There was a quick window to examine the bike and take a few photos before the media briefing, which we all took full advantage of.

Visually, the bike is really sleek and modern. It appears to have a whole new design from ground up and it boasts an enormous amount of factory parts that would have any motorcycle enthusiast drooling. The cockpit was equipped with Renthal Fatbar handlebars and the hand controls were complete factory, with the levers being made from high grade material for additional strength and a completely custom feel and the clutch system was a Magura hydraulic compared to the standard cable option. The braking package was relatively standard apart from the 280mm oversize front rotor and they’re plenty usable and powerful. 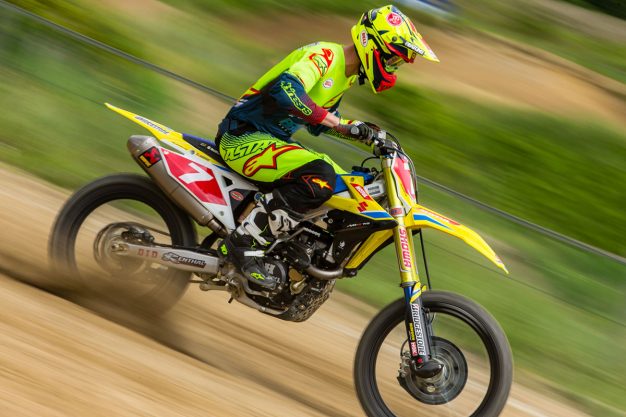 Suzuki’s in-house factory team in Japan use GET ignitions and one bike had sensors hanging off it everywhere. While we asked the question if it was for traction control, unfortunately it was just for data logging, in which case is an important tool for continually improving the bike. The factory Akrapovic exhaust was another impressive feature, along with the carbon bash plate they also use.

The wheel and tyre sets were one of the most incredible additions to the WS, with the billet hubs and D.I.D. rims being fitted with factory Bridgestone tyres, which are extremely rare and are said to be the the pinnacle of factory rubber, however unfortunately they were only for the serious racers and we never got the chance to ride on them. The footpegs were certainly one of my personal favourites of the bike, as being made from billet, they were super lightweight and razor-sharp.

After the briefing, the first MX1 moto was on the line, so we rushed down to the track to catch all of the action. I was super-impressed at how much the bike stood out on the track compared to the 2017 model, boasting its stylish and clever new look, the characteristics of the bike looked really settled on the track all day and Kouichi Fukaya piloted his RM-Z450WS machine to two top five finishes. 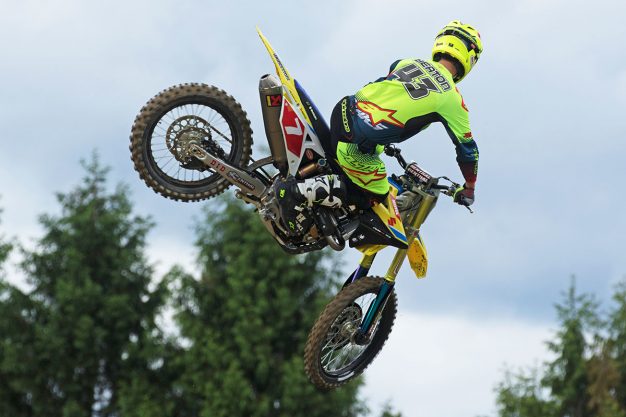 The day after the national race we had the opportunity to ride the WS model and how do you describe such a masterpiece!? With a stylish new look, the quality and charisma of this bike was second to none. The new shape and colour really catches your eye on and off-track. Leading from the front of the bike was the bright yellow Showa air-assisted spring cartridge forks and, let me tell you, if you’re chasing the most comfortable ride while still having the ability to push your riding limits without second-guessing front-end stability, these are the answer.

Having said that, the forks don’t work like that if the bike is unbalanced or you don’t have a shock to match. The Showa B-FRC factory shock is something to rave about, as the amount of traction produced from the rear tyre not leaving the ground through acceleration bumps was phenomenal – you could really hit the throttle hard and the traction never wavered. The bottoming resistance on both the front and rear of the bike was incredible, from pushing the bike hard through braking bumps to flat-landing off fast single jumps and aggressive breaking down steep declines, Suzuki’s factory RM-Z450WS really held up everywhere.

Run, stop, turn is the philosophy behind the 2018 RM-Z450 and this WS model completely ticks all the boxes. The engine is so smooth that I thought I was back on the bullet train at cruising speed! It has the ability to pull almost any gear you wanted without lagging or ripping your arms off, so smooth off the bottom and so strong in the mid, while still having enough over-rev to accommodate the die-hard valve-bouncers. 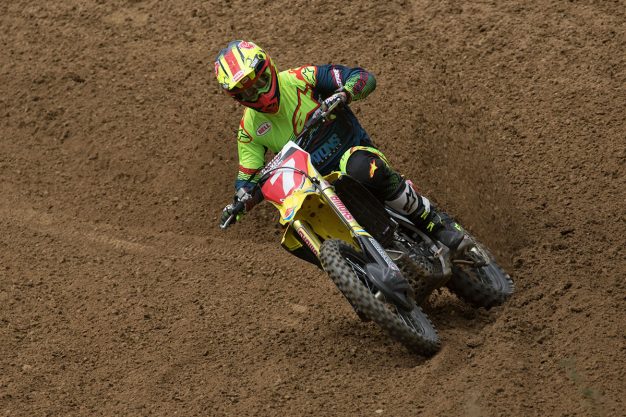 The factory four-speed gearbox – yes, just four gears – makes changing gears almost irrelevant and the mid-part of the power curve really put a smile on my face when flying up some of the steep hills at the Fujisawa Sports Ground. The engine is so impressive because it was completely accommodating for every level of rider that hopped on it, but if you knew what to do with the right-hand grip, it answered everything you could ask for.

The stopping capacity of the RM-Z450WS is also incredible with the front rotor upgrade. After bombing down some of those hills like a rookie skier on his first snow trip to Mt. Niseko, the balance of the chassis under brakes made for some of the most controlled braking I have ever experienced. As for the turning ability, the wheels were consistently stuck to the ground and, unlike the air fork in the 2017 model, this front-end is so stable and allows you to turn on a dime no matter the speed you’re going. It’s so easy to change direction and doesn’t feel anywhere near as heavy when transferring weight during a direction change, which is obviously assisted by the amount of titanium popping out of the works racer.

The general feel and ergos of the latest RM-Z are particularly comfortable and really help you sit further forward on the bike without feeling crammed for space. The smart-styled plastics never caught my boots once the whole time I rode the bike, which is a big bonus for a taller rider. In saying all this though, if this is a sign of what is to come from Suzuki in 2018, you had better knuckle down and set aside some fun tickets for one of the most modern and user-friendly bikes in the pits. 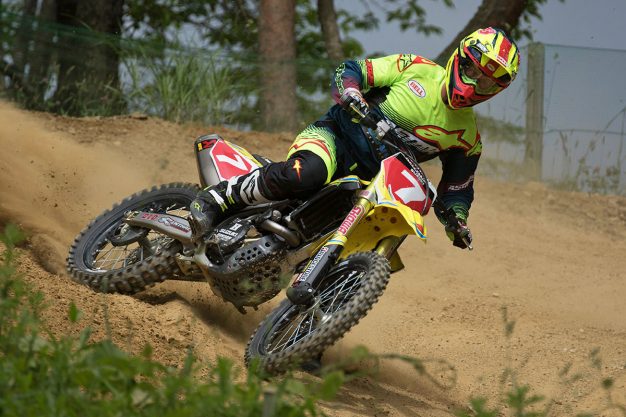 The next day we toured two of the four Suzuki plants, which were based on approximately 32 hectares each. They are mind-blowing facilities and really helped us understand the magnitude and quality of the products they continually produce. It was a fascinating experience to take a walk through the assembly plant and witness how efficient they all work and how quickly a particular type of motorcycle went from being a rear wheel and swing-arm, to a complete and rideable motorcycle about 30 minutes later. The philosophy in the manufacturing plants is to always put the consumer first, not to over-complicate things and to stick to simple design that works precisely and efficiently.

We were limited in what we could see, but from the amount we were able to witness, it really resonated how much they care about quality and that they adopt the true Japanese culture of ensuring nothing is wasted and that the most professional job possible is carried out.

The last day before we set off home we were invited to the unveiling of the 2018 RM-Z450 and, while we have to remain tight-lipped about what we learned and the changes that are coming, I will say that if there are a lot of similarities between the works and production bike, you will not be disappointed. It would be worth every dollar of your investment and only time will tell just how similar it is to the WS once we finally get to throw a leg over the production model and put it through its paces!