We’ve seen a whole lot of exciting on-track action throughout the opening five rounds of the 2017 Motul MX Nationals series, with plenty of challenging circuits and conditions being thrown at the competitors. With the series now taking its regular mid-season break, MotoOnline.com.au takes a look at a selection of riders from both the MX1 and MX2 classes and rates their performances to date. Rider: Dean Ferris
Rating: 9.5/10
Rundown: It has been thoroughly impressive watching the CDR Yamaha rider throughout the first half of the 2017 Australian motocross season. They say defending your first title is quite a challenging task, but at this point in time Ferris is doing a stellar job at successfully doing so. Now carrying a 48-point lead over Gibbs with five rounds remaining, it’s definitely going to be tough for his opposition to steal the MX1 series lead away.

Rider: Luke Clout
Rating: 7/10
Rundown: As a rookie in the MX1 class and a rider who made the move into the category earlier than he had planned, Clout has been impressive for much of the first half of the year. Yes, the former MX2 champion has had some average performances, but he has also put together some great ones. He’s looking good for an overall podium finish and if it weren’t for a mechanical issue in moto two at Horsham, we definitely would have seen the Crankt Protein Honda Racing rider achieve that already.

Rider: Todd Waters
Rating: 7.5/10
Rundown: Coming into the season as a definite title favourite, it certainly has been a tough year for the Crankt Protein Honda Racing newcomer with injuries and mechanical issues plaguing him. Now sitting fourth overall in the MX1 standings, Waters is yet to claim a moto victory this year and he hasn’t reached his true potential due to multiple reasons. Can Waters turn things around during the second-half? This mid-season break could definitely do wonders for the Queenslander, so let’s see how he goes. 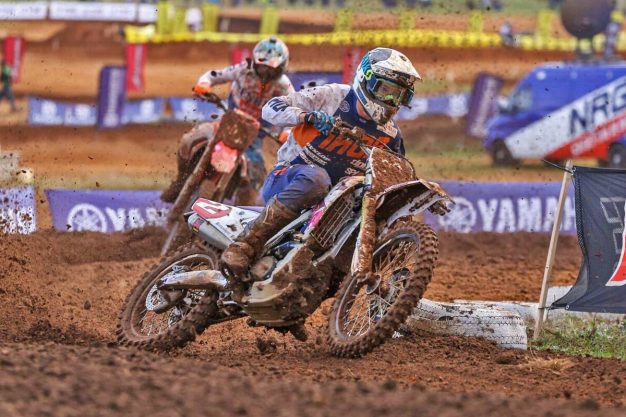 Rider: Kirk Gibbs
Rating: 8.5/10
Rundown: The 2015 MX1 champion entered the season coming off the back of another serious injury for the second year running. It hasn’t been a perfect season for the KTM Motocross Racing Team rider, but Gibbs is the only rider to beat Ferris this season as he topped the CDR Yamaha rider in motos at both Appin and Murray Bridge. The South Australian is a rider you can never count out, so let’s see if he can turn it up during the second half and continue to put it to the defending champ.

Rider: Wilson Todd
Rating: 8/10
Rundown: Although the DPH Motorsport Yamaha rider does hold the series leading red plate, it hasn’t been a perfect season for him in 2017. Todd has put together multiple strong riders and rounds wins, but he has also struggled at times as his closest rival Mitch Evans excelled. Trading the series lead back and forth, it has been an exciting battle to date for the MX2 title and it’s definitely not slowing down any time soon.

Rider: Mitch Evans
Rating: 8/10
Rundown: Much the same as Todd, Evans has two overall victories and has shown some amazing speed throughout the 2017 season. The Serco Yamaha rider only trails Todd by six points following five rounds of racing, so we’re definitely not seeing either rider run away with this one. You can expect Evans to be right up front throughout the remaining five rounds and further overall victories are definitely on the cards.