A selection of questions with the returning AORC front-runner.

Making his return to the Australian racing scene in 2017 following two seasons touring the American Grand National Cross Country (GNCC) series, Daniel Milner has been super impressive as part of the KTM Enduro Racing Team. Yet to be beaten in the Yamaha Australian Off-Road Championship (AORC) this season, Milner is enjoying his return and looks to have found a comfortable home with the Glenn Kearney-managed KTM off-road outfit. For this latest edition of Fast Thoughts, MotoOnline.com.au decided to check in with the 25-year-old to learn more about his recent homecoming, AORC success with KTM and more! Returning to racing in Australia…

Yeah it’s been real good. To be back home racing again and seeing everyone’s faces that I’ve grown up racing with, it’s been pretty cool to catch up with everyone and then see the young talent coming through too. It’s pretty cool to see how much the younger generation is getting faster and faster. To be back riding for the KTM in my first year is pretty sick, I’m excited and I’m loving it so far.

Working with the factory KTM squad…

Yeah, so far, so good. Working with GK [Glenn Kearney] and Mick [Carusi] my mechanic, it has been going real smooth. We did a lot of testing during the off-season and to where we are now, it has been a lot of work but they’ve made it come easy for me and are willing to do everything and anything to get things better. It’s definitely making it the easiest jump from a Japanese bike to a European bike that you could have. As soon as I heard that GK was team manager, I kind of jumped on it. I’ve got so much respect for that guy, we’re good mates and we’ve had some good times. So for him to jump on the team to be the team manager, I pretty much jumped straight on that. As soon as that was all happening I made sure that I got Mick on board to be my mechanic, he’s been at the off-roads probably longer than I have so to be able to snatch him up as a mechanic was pretty cool. Also working with Leisky [Jeff Leisk] and even my teammate [Lyndon] Snodgrass, it’s cool to have a young guy that kind of looks up to me you could say. I can help him out and get him quicker, he’s young, willing to listen and I think he’s going to go a long way for sure.

Your success on return to the AORC…

Coming back I knew that I wanted to win and win only, so I was really hungry coming into the season, especially with the new team. If I wasn’t winning, I would have been pretty angry with myself. We’ve done everything we can to get to this point and now I’ve just got to keep maintaining it. I’m working with Ross Beaton on the bike and he’s been helping me with a lot of stuff on the bike, and I’ve got my trainers off the bike too. We’re doing pretty much everything we can to be winning, so I’ll just keep doing my thing and hopefully it keeps working out. 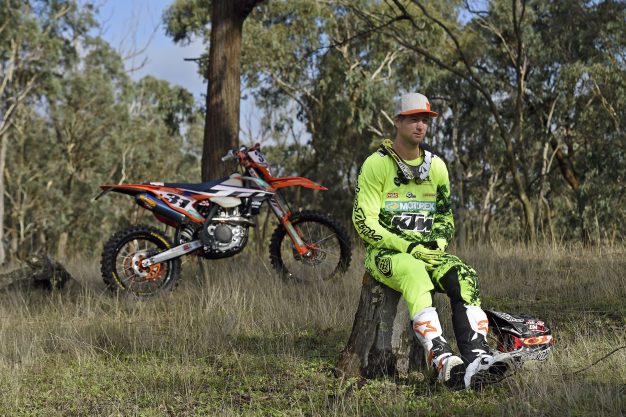 What you learned from your US stint…

Us Aussie guys, I don’t think we respect how good we have it here. Because I’ve grown up here, it’s always one of those things where you want to go overseas and go racing. To have gone and done that and seen the American side of things and how professional we are here in Australia, it was a big step. Myself and the team over there, we struggled a lot, it made it difficult being in another country trying to race over there when none of us were getting on. So to come back here and work with people, especially GK, that kind of know me, it has just made it so much easier for me. It’s just a lot easier being around your friends and everything like that, hat’s off to [Matthew] Phillips, being in Europe for so long. He just went over there with his girlfriend and done what he’s done, so it’s an unreal job for him to do that. Obviously you meet friends over there, but you don’t talk our lingo and carry on like us Aussies do, so as I said, it’s definitely cool to be back and having fun.

The future for Daniel Milner…

In the future I definitely would like to get overseas again, before my career’s done I’d like to get over to Europe and race the world titles, but we’ll keep taking one year at a time and see how we go. My whole career I’ve wanted to be overseas, especially on the Europe side of things because that’s where I seem to be stronger on the enduro side. That’s kind of where I was leaning to, but it all came together with Yamaha in America because at the time they didn’t really have a team in Europe and I didn’t have that opportunity to go there. Now with KTM, which is obviously manufactured over in Europe, it’s one of those things that hopefully all goes forward and we stay on these orange bikes. I’m absolutely loving them so far and we’ll obviously get over to Europe, race the EnduroGPs and hopefully get some titles – that’s the plan.