If you are an off-road motorcycle enthusiast, when you think of Austria a few things come to mind – yodelling, beer, KTM and Erzberg! Or some mixture of them together. And fortunately enough for us, KTM Australia invited MotoOnline.com.au across the world to Erzberg for the launch of the 2018 KTM 300 EXC TPI!

It would be easy to be in awe of Erzberg as a first timer to the Iron Giant, but what KTM were presenting was a world-first, with fuel injection on a two-stroke enduro bike. Greeted by KTM’s off-road marketing manager Joachim Sauer, we were stepped through the new TPI two-stroke engine before being unleashed onto Erzberg under the watchful eye of European off-road legend Andreas Lettenbichler.

Off-road two-stroke bikes have come along way in recent years and KTM first started developing and using two-stroke engines in their motorcycles back in 1972. This latest TPI two-stroke engine has come to fruition due to the new European emissions standard, Euro 4. KTM were not content with releasing a dumbed down version of their big bore off-road beast to pass emission standards and fast-tracked the new two-stroke engine that they had been developing in order to be ready for the Euro 4 emissions regulations in 2018.

Ever since four-strokes really started to assert their dominance in the enduro and motocross market, the concept of a fuel-injected two-stroke has been on everyone’s mind and the questions began – what could be next for two-strokes if they just continued developing the off-road two-stroke models? KTM has really stayed true to off-road and enduro racing over the years and continued developing the two-stroke off-road motorcycles, so it is really fitting that a brand that has been dedicated to the two-stroke cause has released the world’s first fuel-injected two-stroke for off-road racers. 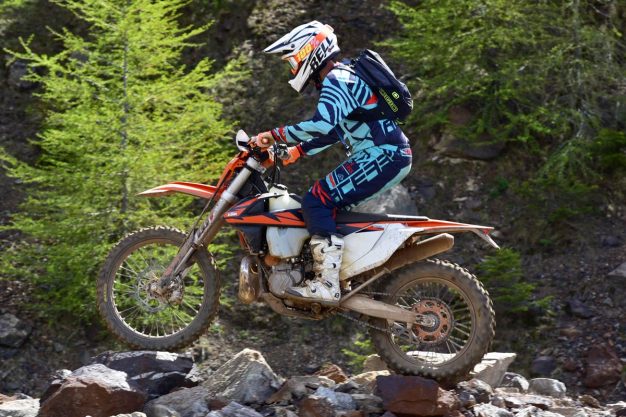 KTM first started developing a fuel-injected two-stroke motor 10 years ago, which has seen a few different evolutions of the idea including direct injection. However, after developing a working prototype, KTM went in a different direction as the direct injection would not allow KTM to keep with their standards of an off-road racing bike. Fast forward a few years and endless hours of development, KTM arrived at the TPI two-stroke engine design.

TPI is short for Transfer Port Injection, which is a design mixes fuel with oil through transfer ports at the back of the cylinder head, which is drawn into the combustion chamber, rather than directly being injected. KTM were able to get a better mix of fuel/air/oil combination in this manner. This also allows the fuel/oil mix to be more precise and provides enough oil to lubricate it perfectly, rather than over-deliver the oil at its previous 50:1 ratios. The use of the TPI allows the oil to range from 70:1 through to 100:1, depending on engine needs from rider input, etc.

Improvements to the overall running of the bike start with 30-40 percent better fuel efficiency, automatic elevation compensation removing the necessity to jet your bike for different conditions, smoother engine characteristics, no need to mix fuel and less emissions. No need to worry though, you will still have the sweet, sweet smell of burning oil – it’s just doing it a little more conservatively.

Traditional two-stroke owners enjoy the ease of maintenance and being able to work on their own bike during the week, so does this mean that it’s all going to change with the introduction of the new TPI model? Nope! The 2018 KTM 300 EXC TPI is just as easy to work on. Read the owners manual once and you will see you only need to disconnect the injectors at the back to the cylinder head and it’s then the same as any other two-stroke. And let’s be honest, if that small ‘procedure’ scares you off, then you probably shouldn’t be working on your bike in the first place. 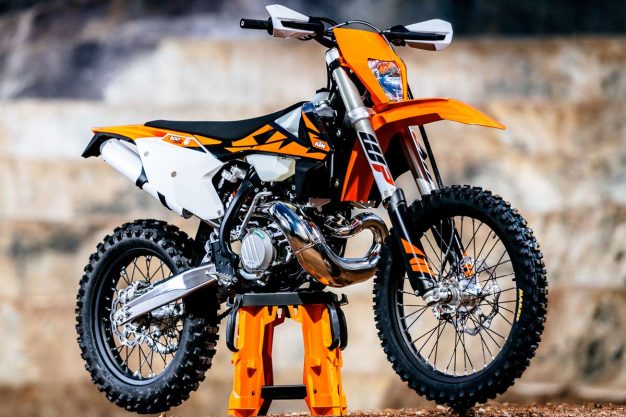 Aside from the obvious fuel injection, the 2018 300 EXC TPI machine hasn’t changed too much overall from the previous model, so if you liked the 2017 bike, you will for sure love the 2018 fuel-injected model. Although minimal, there are some changes to the 2017 bike that were needed to house the 2018 TPI engine. The fuel tank is nine litres with an integrated fuel-pump and the air-boot has been revised to accommodate an intake air temperature sensor.

The 2018 TPI model now features a 39mm Dell’Orto throttle body and the WP XPlor 48mm fork has been revised slightly with new outer fork tubes, which were carried over from the 2017 SX models, along with slightly stiffer internals to increase bottoming resistance. Revised radiator protectors have also been added to the 2018 KTM 300 EXC TPI for improved self-cleaning. It also wouldn’t be fitting to present such an important step forward in the two-stroke world with the same old colour scheme, so for 2018 the new model receives a fresh graphics kit and white hand-guards.

One thing that might stand out on the spec sheet if you match them up is the weight, as the TPI version is three kilograms heavier. You may think that’s a lot of weight, but you need to consider the weight of everything that has been added to the bike to make new TPI motor operate. With an oil reservoir, fuel-pump, new throttle body and additional air sensors and EMS, three kilograms is not that big of a deal, especially when you see that weight is still lighter than most other brands. As Australia will be receiving both the fuel-injected and the carburetted models, it would be great to stack them up against each other later in the year to see the differences in performance and weight.

One thing you will most likely notice is the fuel tank, which has been shifted backwards by approximately 20mm to make room for the oil reservoir which sits in the top of the frame top tube just behind the steering head and in front of the fuel tank. The oil reservoir itself holds 700ml of oil and lasts around about five tanks of fuel, while a low oil indicator is featured on the dash to give you warning of when the oil is running low with approximately 200ml left before empty. The ECU has also had to find a place within the frame of the bike and sits under the seat behind the fuel tank. 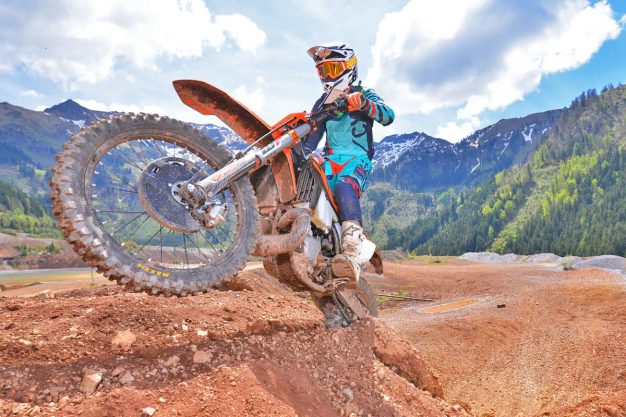 The 2018 300 EXC TPI performed as expected and exactly like the 2017 model as far as handling and rider comfort goes. To be honest, the bike didn’t feel like it had an extra three kilograms strapped to it, but that is probably something you won’t pick up until you ride the bikes back-to-back in the same environment. Without doubt Erzberg is the most fitting place to launch the 2018 TPI range. With hill-climbs that seem to extend forever, as well as tight and technical single-trail over roots and rocks, this gave us a good idea on how well the new two-stroke engine adapted to the conditions, from about 400 metres up to 1600 metres above sea level.

The new TPI engine itself has torque like you wouldn’t believe and the 300 loves being lugged around in the low, meaty part of the power through the tight stuff just as much as it performs while revving higher in the range on the steep hill-climbs and more open fire-trails. The one thing that was really evident was how well the motor worked at slower speed and really got moving without too much rider input from the clutch whatsoever. On really slow, jolting, rock sections, the new TPI model felt a bit more four-stroke-like as the motor kept working well at the low speeds.

How about a mapping switch for a two-stroke? Yep, traction control is not quiet ready for the TPI two-strokes according to KTM, but it seems they are working on it. However, the mapping switch we did have was really useful on the 300 EXC TPI, although I feel we may not have got the most out of it with the conditions we had. In the tight single trail the slightly less-aggressive map was useful, but there were some slightly damp sections the trail was not really slippery enough to take advantage of the different map settings. 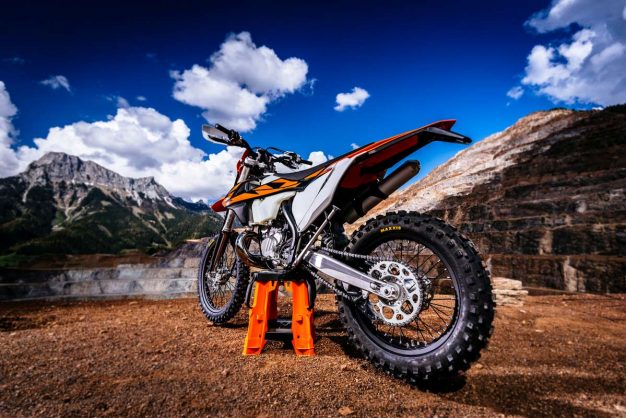 The suspension has had a few minor changes, mostly internally with slightly firmer internals to increase bottoming resistance and offer better rider feedback with different outer-tubes. The suspension was a really good match for the wide variety of trails and terrains we got to experience at Erzberg. Particularly on the harsh transitions of the trails, which almost always seemed to be something closer to 90 degrees than it probably was, but the suspension always handled better than expected, especially when looking what was ahead of you at such an unforgiving place like Erzberg. It was plush over the small, sharp bumps, while remaining forgiving and stable over the larger hits on rocky terrain. The ease of changing the clickers for compression and rebound on the trail on the fly makes it so much easier to adjust for the different conditions.

KTM’s taken what was already a class-leading bike and made it even better. With a more responsive engine, being easier to ride, and using less fuel, KTM has made owning a two-stroke a little simpler. There’s no need to jet your bike for different conditions – it does it all for you and this bike has to be right at the top of the wish list that is for sure!

The 2018 KTM 300 EXC TPI model will be available within Australia at the start of next year (RRP to be announced), however as Australia does not need to meet the Euro 4 regulations, we will first receive the carbureted models around August. On top of that, 2018 KTM 300 EXC TPI owners will also have the option to add the additional mapping switch as an option through your local KTM dealer, so check www.ktm.com.au for the latest. 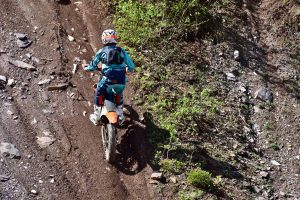 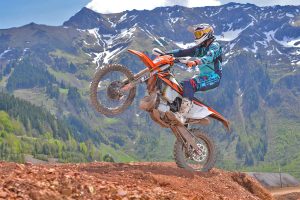 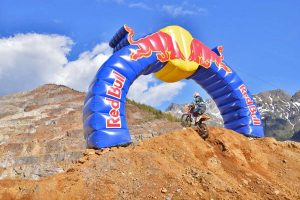 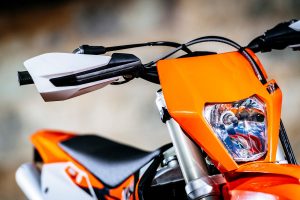 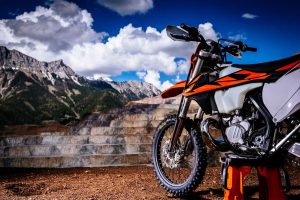 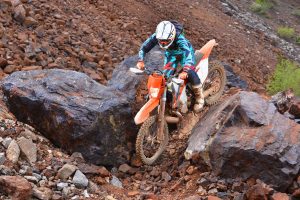 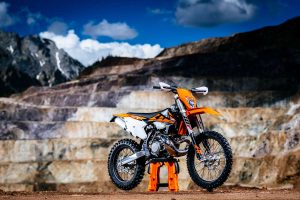