KTM do not do anything by halves, that’s for sure. When releasing a new model of bike, the mentality is never to put something out with slightly less performance or to release something that is going to give you an ‘ehh’ feeling. And for 2018, KTM has unveiled the world’s first off-road competition two-stroke EXC with fuel injection.

Due mainly to the fact that Europe must now meet Euro 4 emissions regulations, KTM was forced down the path of keeping the two-stroke off-road bikes alive. Joachim Sauer, KTM’s off-road product marketing manager, was specifically told to make it happen at any expense and that is precisely what has happened.

MotoOnline.com.au was invited half-way around the world to experience these bikes in one of the most iconic locations in the world for off-road competition – Erzberg! There is no place like Erzberg to give us a variety of terrains and elevation to put these TPI bikes through their paces and, of course, our paces. Relentless hill climbs, gruelling rock gardens, technical single trail and of course some locations on the ‘Iron Giant’ that not many people can navigate without the technical ability of a trials rider. Luckily though, they had some professionals like Johnny Walker and Andreas Lettenbichler to show us journos how the new KTM EXC TPI bikes could handle sections of Erzberg like ‘Dynamite’ and ‘Carl’s Dinner’.

KTM has been evolving its two-stroke engines from the very first air-cooled engine in 1972 all the way through to delivering an all-new carburetor-based water-cooled two-stroke engine for MY17 last year. It seems that ever since high performance four-stroke off-road bikes became so popular over 10 years ago, the die-hard two-stroke fans have been speculating about the release of a fuel-injected two-stroke engine to continue the development. KTM also race-tested the new TPI bikes at the Roof of Africa race by Andreas Lettenbichler and Lars Enockl in late 2016. The 2018 KTM 250 EXC TPI as a whole has not changed significantly from the 2017 250 EXC, obviously except for the fuel injection, however there are a few smaller changes to the 2018 250 EXC TPI, some of which are necessary to support a fuel-injected two-stroke motor. The fuel tank is nine litres (500ml smaller than 2017) with an integrated fuel pump, the air-boot has been revised to accommodate an intake air temperature sensor, a 39mm Dell’Orto throttle body has been added and the WP Xplor 48mm fork has been revised slightly with new outer fork tubes, which were carried over from the 2017 SX models

Revised radiator protectors have also been included for improved self-cleaning and this is not something that you will notice, but an improvement nonetheless. And it would not be fitting to present such an important step forward in the two-stroke world with the same old colour scheme, so we have a new graphics kit with white hand-guards. Overall the new 2018 KTM 250 EXC TPI model looks the part right out of the box, as we have come to expect with all KTM models over recent years.

With KTM’s commitment and enthusiasm for the two-stroke off-road scene, KTM has not only delivered a bike that meets the Euro 4 emissions, but also out-performs the previous model and is definitely ‘Ready to Race’. KTM has been working on fuel-injected two-stroke engines for over a decade and with the current day of electronic development (which has been sourced from the current four-stroke models) the TPI engine is now possible.

The KTM TPI two-stroke engine has gone through stages of evolution, initially using a direct injection platform through a few changes and eventually landing on the TPI two-stroke engine. The direct injection engine had been designed and tested, however did not offer everything that was required from KTM and also came with its own difficulties, which would impede on frame design. In short, they were way too complex and changed the engine characteristics too much from the previous carbureted bike. So what does TPI stand for? TPI stands for ‘transfer port injection’. The basic working of the TPI is that it uses transfer ports at the back of the cylinder head, which is drawn into the combustion chamber, rather than fuel being directly injected. KTM were able to get a better mix of fuel, air and oil in this manner and this also allows the fuel oil mix to be more precises and keeps enough oil to lubricate it perfectly, rather than over-deliver the oil at its previous 50:1 ratios. The use of the TPI allows the oil to range from 70:1 through to 100:1, depending on engine needs at any given time.

You cannot get past the true beauty of owning and riding a two-stroke and the ease of actually working on the engine yourself without the need to know the complexities of the four-stroke engine and KTM know and embrace this. The 250 EXC TPI is only slightly more complex than the carbureted model, the cylinder head is actually very similar and only slightly modified for the injectors. So you only need to disconnect the connectors and the fuel line and continue on with maintenance, as you would have on the 2017 model.

General improvements on the 2018 250 EXC TPI, aside from the obvious fuel-injection advantages, include a 30 to 40 percent increase in fuel efficiency and automatic elevation compensation which removes the necessity to jet your bike for different conditions. Smoother engine characteristics are now featured too, there’s no need to mix your fuel and there’s now up to 50 percent less emissions. But don’t worry, you will still get the satisfaction of two-stroke oil burning, just in a more environmentally-friendly way.

The 2018 250 EXC TPI is identical to the 2017 model in almost every way except for the fuel tank, which has been manipulated and shifted backwards by approximately 20mm to make room for the two-stroke oil reservoir. This reservoir sits in the top of the frame top tube, just behind the steering head and in front of the fuel tank. The ECU has also had to find a place within the frame of the bike and sits under the seat behind the fuel tank. The oil reservoir itself holds 700ml of oil and lasts around five tanks of fuel – a low oil indicator is on the dash to give you warning of when the oil is running low with approximately 200ml left before empty. 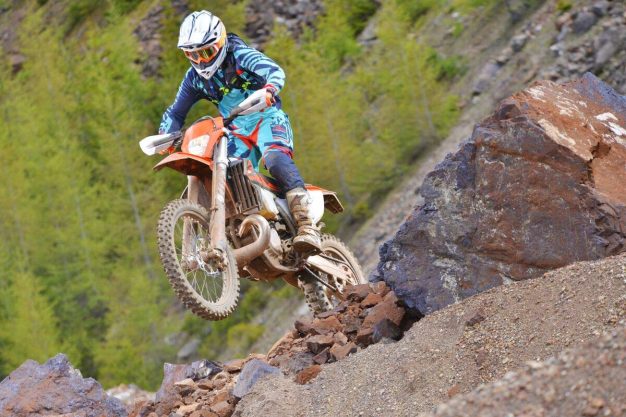 The 2018 250 EXC TPI is around about 2.5kgs heavier than its predecessor, which probably seems like a lot, but it remains lighter than what is currently on offer from other brands. Within that 2.5kg you need to factor in the oil reservoir, fuel pump, new throttle body, additional air sensors and EMS. It will actually be interesting to see the differences between the two bikes – TPI and carbureted – given the fact that Australia will receive both the TPI model and a carbureted model at different price points.

The EXC TPI models are fitted with a Brembo clutch, which also utilise a DDS Clutch that was developed by KTM for the TPI models, the steel basket better deals with high use thanks to high heat resistant clutch plate. The result? Easier and smoother clutch operation than conventional coil springs. It’s these little details like a Brembo hydraulic clutch that really set the KTM models apart from other bikes and they’re the finer details that all add up in the end.

Erzberg was the perfect place to be introduced to the 2018 250 EXC TPI with the large variety of terrain from the huge hill climbs to the tight technical single trails – we even got a demonstration of riding sections like ‘Dynamite’ and some of the larger rock gardens that required a high level of trials riding background. The 2018 250 EXC TPI bike handles as great, just as I remember the 2017 model – an extremely user-friendly, versatile and simply enjoyable bike to ride.

The weight of the bike did not seem noticeable, but that might not be something you actually notice until we have the opportunity to test both bikes back-to-back. The power of the bike and the way it comes on seemed to be smoother and easier to use at lower speeds. Even with the change in elevation at Erzberg, the 250 EXC TPI was perfectly tuned the entire time just as KTM indicated it would be – whether we were at at 500m or at 1466m, the motor remained very responsive and pulled straight off the bottom all the way to the top.

The suspension again has not really changed very much, but with the added weight, the slightly stiffer internals on the fork give the fork better bottoming resistance and cope a little better with that weight. Again, the suspension from front to back is very confidence-inspiring, which is exactly how the bike felt last year – it eats up the smaller chop and is really predictive on the larger hits. It’s just a really sure and capable feeling that I’d love to take out on some local single trail here at home – agility comes to mind when we’re talking quarter-litre KTMs.

Overall KTM has taken an already impressive 2017 250 EXC platform and made it better, with the more responsive TPI two-stroke motor, which has paved way for a number of benefits including improved fuel consumption, better performance, smoother power delivery, reduced emissions, lack of needing to pre-mix fuel and absolutely no need to jet the bikes. The same Cross Power 2T oil can also be used for both the EXC and the EXC TPI models.

The 2018 KTM 250 EXC TPI model will be available within Australia at the start of next year (RRP to be announced), however as Australia does not need to submit to the Euro 4 regulations, we will first receive the carbureted models around this August. On top of that, 2018 KTM 250 EXC TPI owners will also have the option to add the additional mapping switch as an option through your local KTM dealer, so check www.ktm.com.au for the latest. 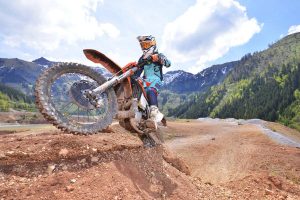 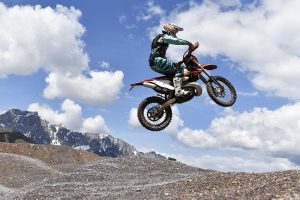 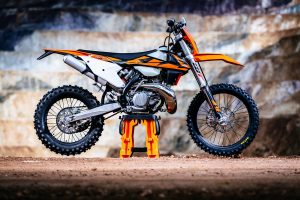 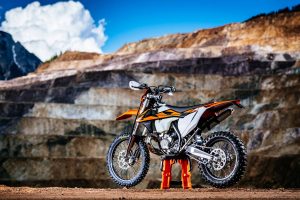 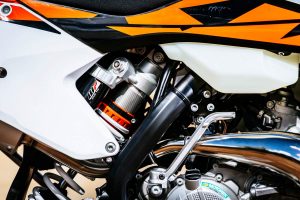