Ferris and Evans share their thoughts on Conondale's third motocross round. 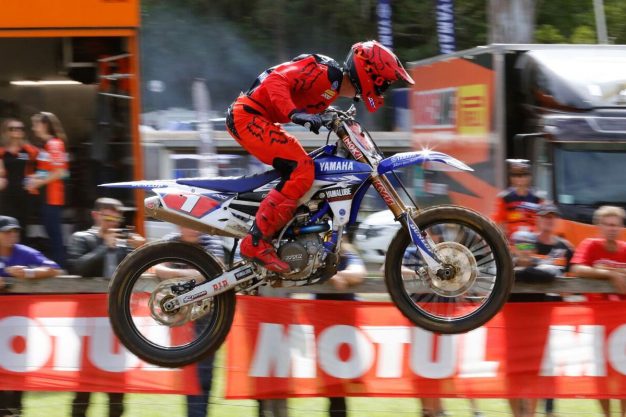 These post race interviews are becoming really regular this year, three overall wins in a row and a perfect day here at Conondale, must feel good?

Yeah it does, it was one of the most enjoyable days of racing I’ve ever done. I just felt the flow all day, I got the Superpole and both motos went really smooth, I had some really good lines and I just kept playing, finding good lines and dropping my lap times. It was awesome and everyone loves coming to Green Park here in Conondale, it’s an awesome place and like I said on the podium, it’s where I got my first race win 10 years ago when I was in Under 19s, so it’s kind of special for me.

How were the conditions today, obviously a lot different to last year, but it looks like it turned out well?

You know, last year was awesome too, but this year was great. It was wide open, balls to the wall, slide it and on the anchors hard on the way in. But I felt like you had to be really precise in its own way and really smart here to get around this track, it was still slick and technical in its own way.

What goes through your mind when you’re out front controlling a race like that on a track that you’re obviously really comfortable at?

Just looking at my lap times, it’s what I do when I’m practicing, I’m chasing those lap times and then in the closing laps of the second moto I just really back in down and control it. Just make sure you hit your marks and stay focused.

We just want to keep having these good days, there’s always little things to improve on whether it’s my body, the bike, there’s so many aspects that go into motocross. So that’s what we try to do, we try to have these clean days and the wins, enjoy them and try to get more of them.

Like you said, that first win of yours came 10 years ago here, it’s a long time for your career, do you feel like you’re now reaching your peak even though you’ve been around so long and you’ve got so much experience? Do you feel like Dean Ferris is in the peak of his career right now?

Yeah, I believe so. If you had of told me 10 years ago that it’s going to take me 10 years, I would have been off it. When I was 16 or 17 I was just in such a rush to get to the top, you know? I face a lot of hard years and it took a long time to come through, not just the speed, but the race craft and everything that comes with it. I started young with motocross and I was just eager to get to the top, but yeah you could say that I am probably at my best at the moment, so we’ll just keep striving and we still want to improve, that’s the goal.

It does, ever since I’ve been with this team I’ve been eager to get back. I’ve realised that having good people and a really good machine under you, it makes a big difference. The moment I was on the team I started riding really well and I wish I had this when I was in Europe, you know? We’ll see what’s about, obviously if I go over, CDR is still here, so I would need to find a fitting team like CDR to go. Mitch Evans with the 1-1 here again at Conondale, awesome result and some really exciting races, so how was it for you?

Yeah I definitely made it hard for myself today, especially in that first moto I didn’t get the best start. I was outside of the top 10 and I just kept a positive mindset throughout the whole thing, I kept telling myself, I can, I can. I was just chipping away and noticed that I was catching the front-runners and I was able to get the job done in that one. In the second moto I made it a bit easier on myself by getting a good start. I just tried to settle in during the first couple of laps, my first two laps are always the worst so I was ok with letting the two boys get in front of me. I just tried different lines compared to Jackson and he was riding good, I didn’t think I was going to be able to get him there but he made a little mistake and I just had to run it in. I was able to get the job done, it was a pretty aggressive pass but I wouldn’t expect anything less from him either, so it’s good.

Did you have a plan of attack where you wanted to make a move, or was it just when that opportunity came?

I had a few spots there where I wanted to try and make a pass, I realised I was a bit faster than him in the first-half of the track, but then he would pull away. So I thought if I could stay with him during the end of the second-half of the lap and then try to make a pass, but I was just never close enough. We were half-way around the track on the last lap and I didn’t think it was going to happen, but he changed his line there and I just had to go for it. It was the difference between first and second overall, so I just ran it in pretty deep, we came together but I was just glad neither of us went down.

How does this one feel compared to Appin. They’re two different types of tracks in terms of layout obviously, but how does it feel in comparison?

The way you had to ride the track was pretty much the same, you had to keep your momentum going and you couldn’t rush things because it was pretty slick. Walking the track yesterday I thought it wasn’t going to be that technical, but it ended up being pretty technical because you had to be patient and ride up a gear – you basically needed to trail ride again. Then they watered it before the second moto, so it was even slicker, but it was a good day and we’re happy.

Red plates now, it must be a pretty cool thing to have so early in your MX2 career?

Yeah it is for sure, but unless we have that after the final moto at Coolum, we’re not going to be happy. We’re not worrying about the championship, we’ll just take it weekend-by-weekend and race-by-race, and if we come out on top every weekend and we have the red-plate after the last round, we’ll be happy.

Awesome job, thanks a lot.