Pro class updates direct from round three in Queensland.

Post-race updates from the MX1 and MX2 classes at round three of the 2017 Motul MX Nationals, direct from Conondale in Queensland. 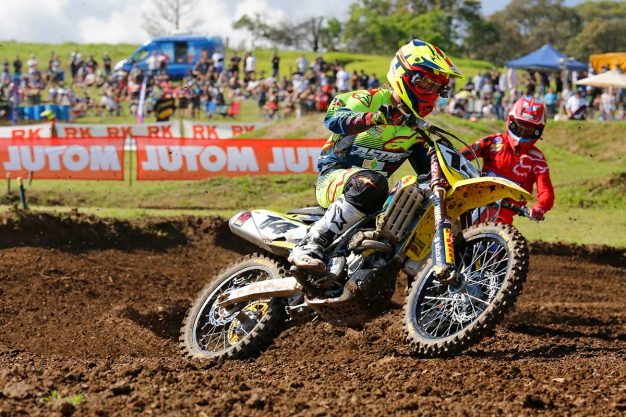 Qualifying:
First up this morning was the MX2 qualifier, where Serco Yamaha duo Jackson Richardson and Mitch Evans revelled in prime conditions to go 1-2, while red plate-holder Wilson Todd was third, Aaron Tanti fourth and Egan Mastin fifth. Next up was MXD with Cooper Pozniak leading the way from Isaac Ferguson, Hugh McKay, Cody Dyce and Kaleb Barham, before finally, in the premier MX1 class Dean Ferris took his third Super Pole in succession this year over Aleksandr Tonkov, Kirk Gibbs – who was quickest in regular qualifying – Todd Waters and rookie Luke Clout.

Thor MX1 moto one:
CDR Yamaha’s Dean Ferris dominated the opening moto at Conondale, taking charge from hole-shotter Aleksandr Tonkov (MEGA Bulk Fuels Monster Energy Kawasaki) early on in the moto and then sprinting away from there to his fourth moto win in five races this year. Behind him at moto’s end was Kirk Gibbs (KTM Motocross Racing Team) and Todd Waters (Crankt Protein Honda Racing) to fill the top three, trailed by Kade Mosig (DPH Motorsport Yamaha) and Brett Metcalfe (SD3 Husqvarna) as he came from outside of the top 10. Sixth was a solid ride by Jesse Dobson (Penrite Honda) in his first appearance of the year, overcoming Luke Styke (KTM Motocross Racing Team) and Luke Clout (Crankt Protein Honda Racing) for position. P9 came Nathan Crawford (MEGA Bulk Fuels Monster Energy Kawasaki) and 10th was Keiron Hall (Synep Racing Husqvarna), then behind him was Kyle Peters (Wilson Coolair Motul Suzuki) from the rear of the field following an early error. Meanwhile, Tonkov dropped all the way down to 14th after leading lap one.

Motul MX2 moto two:
A last lap pass saw Evans make it two from two for the round and extend his race winning-streak to four, taking charge of the red plate as a result. Once again Richardson led much of the moto before coming under fire from Evans in the final stages, making his move in the final moments for another hard-fought Serco Yamaha 1-2 result. Crossing the line third was Mastin, who was ahead of Todd and Webster, as he mirrored his opening moto result. Rykers ended up sixth as he fended off Wills for position, with Richie Evans, Harwood and Ricky Latimer (Yamaha) rounding out the top 10. Finishing 11th, despite a flat tyre in the moto was the again impressive Tanti, although the result didn’t reflect his form in the moto. Overall for the round Evans had a perfect scorecard for victory, joined on the podium by Richardson and Todd. Evans now holds a nine-point lead in the standings over Todd, with Richardson a further nine in arrears.

Thor MX1 moto two:
Another commanding performance saw defending national MX1 champion Ferris edge his way to another impressive victory this afternoon and maintain his perfect overall status for the 2017 season to date, winning five from six motos so far. He jumped out front early on his factory-backed YZ450F and was never headed from there, crossing the stripe around 15 seconds clear of second-placed Gibbs in another memorable result, while rookie standout Crawford recovered for a brilliant third this time around. Behind them in P4 came Waters, who in turn managed to keep Styke and Dobson at bay, while Mosig, Clout, Tonkov and Peters were the top 10. Overall for the round Ferris was untouched with Super Pole and a pair of wins, joined on the podium by Gibbs and Waters. It’s Ferris, Gibbs and Mosig atop the standings, however Ferris has already built a 31-point advantage just three rounds into the season.