Round three of the Motul MX Nationals hits the track this weekend at Conondale in Queensland, where Dean Ferris will be aiming for three overall wins in a row and I have a feeling this round will be telling in the race for the MX1 championship. It will be important for someone to halt the defending champion’s momentum and we can’t wait to see how it plays out.

CDR Yamaha announced during the week that Dylan Long will sit out the coming three rounds, but won’t be putting on a replacement rider, which is a touch disappointing and people have displayed that on social media. They don’t want to disrupt the winning form the team currently has with Ferris, which is understandable, however it is a top bike to have absent for an extended period.

With Jay Wilson returning home after six rounds of GPs, it would’ve been interesting to see him on the factory YZ450F, especially considering he won the MX2 crown for Yamaha just a couple of seasons ago. It doesn’t look like it’s going to happen though, so fingers crossed we see Jay back elsewhere sooner, rather than later. The interview Spence posted with Wilson earlier this week was one of the most insightful I’ve read in a long time and it was really neat to see him say it how it is. There’s nothing easy about moving to Europe and racing the world championship, which is exactly what Wilson relayed in that interview.

These next few rounds of the nationals are going to rollover pretty quickly now, so while all’s pretty calm two rounds in, by the end of this month we’ll be at the halfway mark five rounds in and it’s at that stage that more concern will come into play if certain riders aren’t performing or meeting their expectations.

And speaking of championships, this weekend is the Vegas finals of Monster Energy AMA Supercross, where defending champion Ryan Dungey and Eli Tomac will be vying for the 450SX crown. And on top of that, the East Coast 250SX title has just one point between Jordon Smith, Zach Osborne and Joey Savatgy in the standings and that’s going down to the wire. Cannot wait!

On Friday I headed up to the Gold Coast for Oakley’s new Front Line MX goggle launch at Balter Brewers and they also announced Toby Price as their newest athlete. Still suffering a few issues with his knee after breaking his femur at Dakar, Toby’s wanting to make it back for Finke next month, but it’s not yet a certainty. I headed back home last night and then back up for Conondale today.

That’s it from me for today, stay tuned for all the content from Conondale on the site and follow us direct from the event on social media. Here’s Spence with more…

As Alex mentioned, this weekend’s Conondale event will be a vital event in the MX1 category as Dean Ferris continues his impressive form this season as defending champion. Keep your eye on Kirk Gibbs this weekend though, he was very strong at Appin and his result on paper really didn’t reflect the amount of form he showed at round two.

You may remember last year’s Conondale round being a sloppy mess? Well, I definitely do because I walked around in it all day shooting, but that wasn’t my issue or my point I’m getting at. Let’s hope we get some good weather so the riders can launch the huge Conondale extension this year! As a film guy on race weekends, that’s something that really gets me excited and I’m sure it’s the same for the fans, so let’s hope we can see some style thrown down over that beast of a jump. 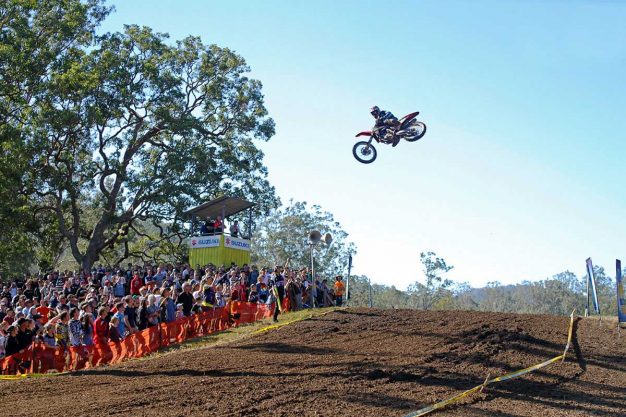 It will be a shame to see one of the most stylish riders off that very jump, Dylan Long, out of action this weekend and for the next few events. It’s unfortunate to see this happen to one of the nicest guys out there just as he lands the ride of his career, but I’m sure it’s the right decision and he’ll come back strong after the mid-season break.

Now I can’t write this week’s Deadline without including one seriously vital piece of information, possibly the most important thing I have written all week – the 125cc Gold Cup is making it’s debut this weekend at Conondale! So maybe I was being a bit dramatic and it may not be that important to most, but for me, this is exciting stuff.

As a 125cc two-stroke owner myself, I’m a huge fan of these bikes and I personally can’t wait to see a swarm of them shredding around the Green Park circuit this weekend. It’s awesome to see former professional racer Cody Mackie confirming his entry to the event, he’s been posting some awesome social media videos aboard his Husqvarna and he’ll be awesome to watch out there.

Anyway, that’s all from me this week, it’s time to start packing my gear and preparing to head off to the airport again. If you’re in the area and you have no plans for Sunday, grab your mates, head out to Conondale, grab a few cold beverages and make some noise for your favourite riders, or just the guy doing the biggest whips – either works!