Rewind: The year of Dungey vs Tomac

Taking a look at the epic 2017 450SX championship battle to date.

As the 2017 Monster Energy AMA Supercross Championship kicked off inside Anaheim’s Angel Stadium on 8 January, it was a new season, a completely blank canvas and yet another chance for the premier 450SX class riders to shoot for the number one plate. Three rounds into the season, it definitely wasn’t Monster Energy Kawasaki’s Eli Tomac who was expected to be defending champion Ryan Dungey’s stiffest competition heading into the Las Vegas season finale.

Honda HRC’s Ken Roczen had swept both the Anaheim 1 and San Diego events aboard the new 2017 CRF450R ahead of Dungey, in the meantime Tomac struggled with reported arm-pump issues due to an uncomfortable setting on-track. Tomac logged fifth and sixth-place finishes at the opening two rounds and continued to fade during the latter stages of the 20-minute main events, this continued at Anaheim 2 where the Kawasaki rider finished down in eighth-place. With the unfortunate exit from the series for Roczen due to a huge crash, Dungey went on to claim his first victory of the season and at that stage build a 25-point gap between himself and Tomac. 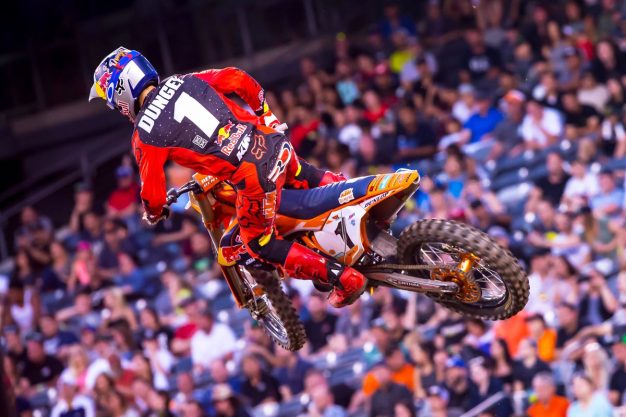 It was clear that Tomac needed to turn his season around followed the third event and he did just that the following weekend in Phoenix. Following multiple disappointing results, the Colorado native scored his maiden victory of the season and looked like a completely new rider. Tomac then went on to capture his second victory of the season at round five in Oakland as Dungey logged consistent third and second-place finishes at each event. It looked like Tomac was about to set off on a streak, but a crash and mechanical issue in Arlington would see him finish back in 15th position – a huge blow to his championship momentum.

Although down, he wasn’t out, Tomac returned in Minneapolis to claim victory and set off on multiple weeks of strong form. The factory Kawasaki rider would claim seven wins out of the following nine rounds of racing, and as always, Dungey was right there remaining consistent and scoring one main event win during that time. Dungey’s consistency proved vital during Tomac’s impressive streak, the three-time champion’s worst finish throughout the entire series to date has been fourth-place, this has enabled him to remain right there in the hunt. In fact, it took Tomac until the Salt Lake City event to claw his way into the points-leading position as he entered the round tied on points with the Red Bull KTM rider.

Tomac topped Dungey in at round 15 and became the third rider to sport the red plate in the 450SX category this season at East Rutherford’s penultimate round, but unfortunately for Tomac, it was short-lived. Shooting his way to the early lead, the Monster Energy Kawasaki rider made a costly error and lost the front-end in a turn seeing him fall far down the running order. As expected, Dungey was right there to capitalise on his arch-rival’s mistake and quickly found himself in the lead and more importantly, back in the points lead. 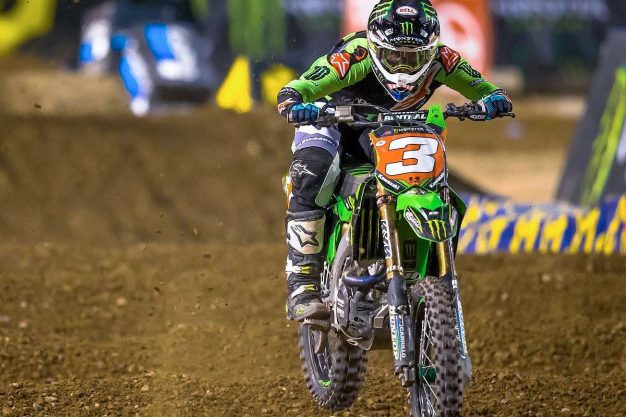 As Tomac struggled to make his way through the field, which was quite an unusual sight to see following a number of impressive riders through the running order this season, Dungey’s teammate Marvin Musquin moved his way to the front and this is where things get interesting. Musquin is out of the championship hunt, he does sit in third place, but he does not have a shot at the title, so for him to finish ahead of Dungey and claim three valuable points is a huge deal. In a well-publicised move, Musquin made life slightly easier for Dungey on the final lap and it was ‘The Diesel’ who took the chequered flag and a substantial nine-point lead into this weekend’s Las Vegas finale.

It’s quite clear that team orders were in place to allow Dungey the victory, no matter what Dungey, Musquin or team manager Roger De Coster say, but that’s racing and Tomac’s teammate Josh Grant would have done the same. Although Dungey now carries a nine-point lead into this weekend’s event, anything can happen and it’s definitely not over. Las Vegas is always a tricky event with minimal traction and a whole lot of pressure, who will come out on top this weekend? It’s hard to say, but whoever does bring home the number one plate has definitely deserved it, there’s no question about that.