As a last-minute addition to the JK Racing Yamaha team for the 2017 MX2 World Championship, Jay Wilson was living out his dream contesting on the world stage against a list of the top motocross racers on the planet. But just six rounds into the season, the 22-year-old made the announcement he would return to Australia and end his 2017 grand prix season prematurely as he sat in 37th position on the championship rankings. Touching down on home turf last Thursday, MotoOnline.com.au checked in with the Queensland-based former national MX2 champion to learn more about his season, the challenges he faced and what he has planned for the future. It was your MX2 World Championship debut, a huge milestone in your career, but you obviously faced challenges and things didn’t exactly go to plan unfortunately. Can you tell us a bit about the experience as a whole?

It was tough, it was definitely tough. I was over there doing the UK Arenacross and their rider dropped out of doing the GPs for whatever reason and then they asked me if I wanted to do it. I didn’t have anything going back here in Australia and I thought, you know, it has been my dream to race GPs and it was my last year to do it on a 250, so I did it. I jumped at it with both hands open and went for it, but we didn’t have a lot of time to get ready. I flew out to Italy a couple of times to do a little bit of riding, but I had been riding a 450 the year before with Honda and also the UK Arenacross on the 450. So I had the final round in London and then hopped on a plane Monday morning to fly to Qatar. We were nowhere near ready to go, but we wanted to just go there and learn, try to get some racing under our belt I guess. We did that and it was an experience, I enjoyed travelling and stuff like that, but it was a bit of a shock. I knew the top guys were unbelievably fast, but the guys from 15th and beyond were still on it, those guys are all going so fast as well. That’s probably what shocked me so much, the speed the guys outside the top 10 were still going – they’re actually not that far off. If you don’t start up front or you don’t qualifying well, it makes it so hard on you. That’s probably where I struggled a lot, I was struggling with qualifying and that would set me up with bad gate picks on the outside. But in saying that, I learnt a lot while I was there and I really enjoyed it.

There’s obviously a lot of factors that went into your exit from the series, but what was it that ultimately made you decide to pack it up and head home mid-season?

My fiancé Misty and myself, we had a baby girl named Poppy. She came back home after the UK Arenacross and I stayed over there in Europe. The team did the best that they could, they’re obviously not a factory team and I knew that when I went there. I tried to give it my best and they tried to give it their best, but we couldn’t make it work. The things that I needed and the things that they could provide, it just wasn’t happening. There’s a lot of factors that went into it, but if I was over there and I could see progress happening with it all, I would have tried to stick it out. But at the end of the day, family is there for you at the start and they’re there for you at the end – I had been missing out on my daughter growing up. That was a big factor in the decision, things just weren’t going the way I would have liked them to and at the end of the day when motocross is all over, the only ones that are going to be there for you are family. I had to be back here to help and support Misty, she backed me 100 percent though. If I wanted to stay over there and race, she backed me with that, but I was just starting to lose the enjoyment being over there. I love racing and racing is what I’ve always loved to do and still want to do it and I still want to win races, but things just weren’t working out being there.

Now that you’re back home in familiar surroundings, with your family and friends, do you feel you have made the right decision coming home? 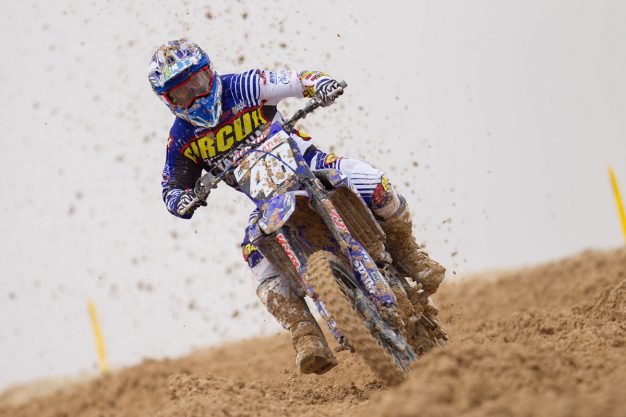 You’re back home and it’s almost a new beginning for you, so what does the future hold for Jay Wilson?

I’ve been home only since last Thursday now and when I left there I didn’t have anything back here, I had no plans, I just knew that I wasn’t showing what I was capable of. I felt like the more I kept trying to force it, the bigger hole I was getting into, so I figured the best thing for me was to come back home and reset. I don’t know what’s next for me at the moment, but like I said, I want to race again, it’s what I’ve always known and it’s what I want to do. I love it, I want to be a champion again, but at the moment I don’t really know what’s next, but we’ll keep searching and see what’s next for me I guess. All the teams seem like they’ve got all of their riders at the moment, so that’s a good thing, but it’s tough for me because I want to race. I guess that I just need to wait it out and see if something pops up, I’m going to keep riding and training because if something does pop up, I need to be ready to go. I want to race, this is all I know, so that’s my goal, to try and find something. If not, I’ll get ready for supercross and see if we can find something for that. I don’t know what will happen, but I guess we’ll just be prepared and wait for a call.

Finally, having been through the process and making the decision to exit the series early and head home, what advice can you give aspiring racers who are hoping to follow their own grand prix dreams?

You’ve got to be 100 percent to be over there, you need to have the right people involved, you need the right team, the right bike, the right equipment – the whole program has to be 100 percent for you to be competitive in the world championship. We’re not talking about just a little club day, we’re talking about every guy being the champion of their country racing to be the number one guy in the world. I underestimated it, as I know many people do, and I give it up to the guys that have gone over to race GPs and been competitive. It’s not so much the racing side of it that’s the toughest, it’s the living with the team, dealing with the languages and all of that stuff, it’s quite hard.