Ferris and Evans share their thoughts on round two of motocross.

In a hugely-challenging round of the 2017 Motul MX Nationals, Dean Ferris (CDR Yamaha) and Mitch Evans (Serco Yamaha) emerged victorious at Appin on Sunday – the latter starring with a dominant 1-1 result. MotoOnline.com.au caught up with them post-race. 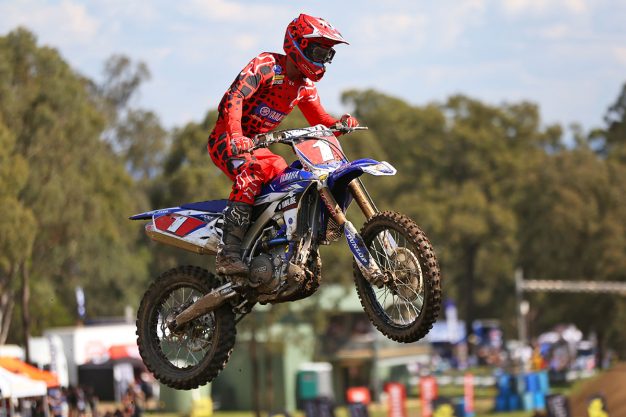 Dean Ferris, here at Appin with a 2-1 for the overall – a really good result, especially that second moto it was just a nice ride.

Yeah, the first moto, it was tough. I didn’t get the holeshot and I kind of never found my rhythm and [Kirk] Gibbs is riding good. I got a little bit lucky, [Brett] Metcalfe and [Kyle] Peters handed it to me with a fall, so I still got solid points in that moto. Second moto I got the holeshot, I knew it was important cause it started to rain, so yeah, kind of just got through the moto and didn’t do anything crazy. I felt more comfortable in that slippery stuff than I did in moto one, I kind of pumped up a bit in moto one, so really solid day and on top of that we got Super Pole again, so extra points. We are in the flow as a team and it’s nice.

How important are these results to begin the season, especially defending the championship, just getting a good amount of points on the board?

You know, points at every round is what it’s all about, but important. Last year we did it the really hard way and we changed our strategy this year. We also, like I said at podium, made some changes in the off-season that have just made my riding a lot better. I wouldn’t say my job’s easier, as motocross is hard, but I just really enjoy the bike.

You’ve obviously been to many of the tracks before, but last year you were sort of refamiliarising yourself with them again, so what is it like this year coming off the championship one year ago?

I actually think it’s easier. I haven’t been to Wonthaggi, but today it was just fresh in my mind from last year, how this track was, we hit the ground running in practice and we kind of predicted how it was going to be… it was going to get hard behind the start gate and stuff like that, so yeah, definitely it’s an advantage and that why national guys in any country around the world in motocross go good nationally. If you go racing Britain or Belgium, where they have ridden those tracks for years, and Cody Cooper in New Zealand, he’s unreal. So yeah, I think it helps coming back to the same tracks.

It seems like you’re probably a little bit more relaxed to start off this season, like you said in a flow. Does that feel like the case for you?

Yeah, it does. I feel like the first round was great, this round was great, practicing was great. We are at another level with my training with Guy Andrews, just because we have had a few years back home now, injury-free. Everything is clicking and we wanted to keep working hard and make sure we try to click off those wins and not settle. Personally, I want to get better and improve and that’s what keeps me going forward.

Is there anyone early on in the season that you have identified that could be the biggest threat for the championship at this stage?

You know, Gibbs is there and he is a solid guy, Metcalfe is still getting himself together and obviously Todd [Waters] is riding through some injuries and he will get stronger, but I’ve just got to focus on what we can do and yeah, have these good rounds. 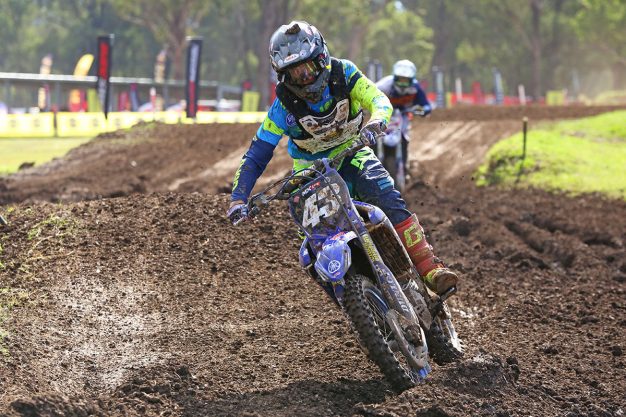 Mitch Evans with the 1-1, you must be really stoked with that, second time out in MX2, so well done.

Yeah, really pumped with how today went, just focused on getting good starts. I got a holeshot in the first one and was top three in the second one – I just sort of settled into both races and let everyone charge hard early. I knew they were both going to be long races and really physical, because the track was really rough today, so I just settled in, controlled my breathing and just paced myself to the end. I got a bit lucky in that second one, but I had to be in that position to take advantage of it. My plan wasn’t to win races this early. If one was there for the taking I would take it, so yeah, first year out I just wanted to be consistent and top five every weekend and build off that after the mid-season break, so for it to come earlier than we expected, we are really happy.

Something just click for you around here today, just good track position or a bit of combination?

A bit of combination. We have the bike going good now, suspension-wise. I knew if I could get a good start I could win motos, so I just really focused on getting good starts. This track is a lot like mine at home and I have just been pounding laps out on that in the three weeks we had off. Appin has always been good to me – the junior Aussies were pretty much flawless the whole week – so yeah, I love coming here, love racing here, and I know you need to get good starts for good track position here. Can’t wait for next year to be back here.

Does this change your approach at all in the championship?

No, not at all. I’m just going to go home, we’ve got a good program going now Peter Hull from Fitstop Australia, which is helping me with my training and diet. We got a good program now and I’m loving training now, seeing some good results. Just going to keep staying consistent and getting good starts and we will see how we end up at mid-break and really start focusing on going for moto wins.

How are you enjoying it, finally being in the MX2 class now? You won the title last year in the Under 19s, but it seems like a good battle there emerging up front this season already.

Definitely, all of us raced each other as juniors, so it’s pretty cool to see us come this far. Back in the day we always used to look up to guys, we always wanted to be there. Ten years ago I never would of thought racing Wilson Todd at club day back at Cairns, that we would be racing for moto wins in the elite class at MX Nationals. So yeah, I’m just pumped on it you know, just loving racing at the moment, feeling really good fitness-wise and yeah, just cant wait to get back into it.