One round into the 2017 Motul MX Nationals and it certainly didn’t disappoint! I said going in that Wonthaggi was an ideal place to launch the series for a new season and, despite some minor rain in the region on Sunday, it turned out to be a mega start to the year.

As is usually the case, when Australian Supercross is on everybody swings that way in terms of attention – and for good reason in recent years – before returning to motocross mode come the early stages of the new year. We’re the opposite of America, but either way works and there was typical excitement about the outdoor opener.

The weekend went reasonably well in terms of our MotoOnline.com.au and Foremost Media commitments, but it will get better come round two and beyond, that is for sure. No amount of planning in the pre-season can have you fully prepared for the fast-paced environment that is race-day at the nationals!

I was personally really excited the way that we managed to implement some new additions to our social media strategy in terms of film content, without taking away from what’s being rolled out on the website at the same time. After-all, people visiting the actual site is what keeps us in business. 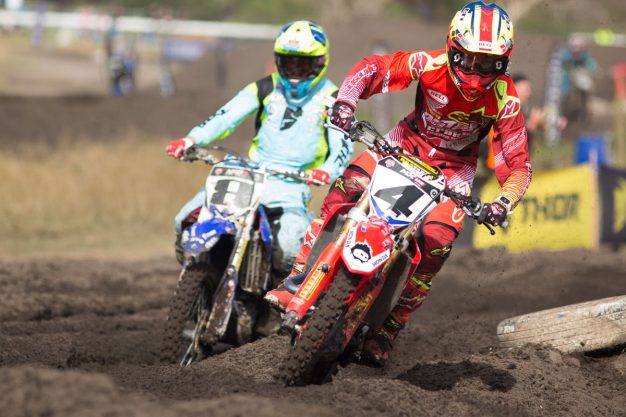 Some may have noticed we’re not doing YouTube-based Highlights anymore, which was a decision we made in the latter stages of last year. With AMA Supercross, Pro Motocross, MXGP and other top-level international series basing their Highlights off of the live television coverage and generating it almost immediately, it didn’t make sense to keep investing in a music video-type clip on our behalf.

And it’s easier said than done when it comes to trying to overlay commentary on footage from a single film guy, so perhaps official Highlights based upon the NRGTV content could be the next step for the MX Nationals series locally. On that topic, if you haven’t already, go and check out the new MX Nationals website – it’s gotta be one of the best event websites I’ve ever seen.

At this point, after a pretty intense week across the Foremost Media websites and production work, I’m keen for some downtime over the weekend, so here’s Adam Spence with more from his perspective following round one…

What an action-packed weekend it was at Wonthaggi’s season-opening round of the 2017 Motul MX Nationals! Following the event we’ve also had a huge week here at MotoOnline.com.au with a massive amount of content created following the round. I’ve personally been bouncing between film work and regular website duties this week and we’ve managed to cover a whole lot – it’s been great!

How about Dean Ferris’ sweep in MX1? It was actually his first-ever 1-1 performance in the Motul MX Nationals series, which is actually quite surprising, but also very exciting. We’re seeing a more mature, smart and strategic Dean Ferris this year and after speaking with Craig Dack today, he confirms that the mental side of things is something he, Dean and the team have been working on.

I’d say the days of making huge errors such as his Western Australian disaster last season are long gone in 2017. The guys over there at CDR Yamaha are feeling great and they’re definitely off to a blazing start in their 25th anniversary year. We can’t forget that CDR Yamaha newcomer Dylan Long is also charging through a nagging injury and posted a top 10 finish on debut, so overall it’s all looking bright under the big blue awning.

It was interesting to see the amount of riders who entered the opener injured, too. We had Todd Waters nursing a broken foot and rib, Nathan Crawford returning super-early from a broken forearm, Long with his healing wrist and also Cooper Pozniak, who managed to keep a hand injury very quiet leading into the 2017 season.

That track was very tough and these guys really gutted it out on Sunday, it would have been brutal out there even at 100 percent health to say the least. Obviously Pozniak managed to come through with the goods and claim the overall victory in MXD on debut with the Yamalube Yamaha Racing team, which was great to see.

Speaking of MXD, I’d expect Cody Dyce to be coming in very hot Appin’s second round of the series. He received a 10-second penalty during the opening moto that denied him the victory over his teammate Pozniak. I personally was right there when the incident occurred and I feel the penalty was very harsh and actually totally unnecessary in my opinion.

The MXD rookie obviously dealt with his own issues in moto two and finished up third overall for the day, but we’re certainly going to be seeing more of this kid as the series rolls on. The guys over there under Scott Bishop’s leadership really run a great program and you can bet your bottom dollar the combination of Pozniak and Dyce will be tough to beat this year in the development category.